UC Davis agricultural entomologist Christian Nansen working in his greenhouse. (Photo by Kathy Keatley Garvey)
If you're a plant and an insect is attacking you, you can communicate your stress to nearby plants as a way to alert them about potential danger--very similar to how animals communicate or respond to predators.

In groundbreaking research published in the journal Plant Methods, UC Davis agricultural entomologist Christian Nansen of the Department of Entomology and Nematology and his team of six colleagues from Brazil discovered that plant-plant communication causes physiological changes in plants and these subtle changes can be detected via analyses of leaf reflectance or hyperspectral imaging. The article is titled “Hyperspectral Imaging to Characterize Plant-Plant Communication in Response to Insect Herbivory."

Nansen credited Professor Richard Karban of the Department of Entomology and Nematology with pioneering efforts in the field of plant-plant communication, and lauded his continuing research. Plants can eavesdrop, sense danger in the environment, and can distinguish friend from foe, says Karban, the author of the landmark book, “Plant Sensing and Communication” (University of Chicago Press). In addition, both Nansen and Karban contributed chapters to the recently published book, “The Language of Plants” (University of Minnesota Press).

Nansen noted that within "the last decade or so, extremely cutting-edge research in the field of plant-plant communication has been done by people like Dr. Monica Gagliano of the University of Western Australia. "Gagliano has elegantly demonstrated that plants can respond not only to aerial volatile compounds and root secretions but also to sound." 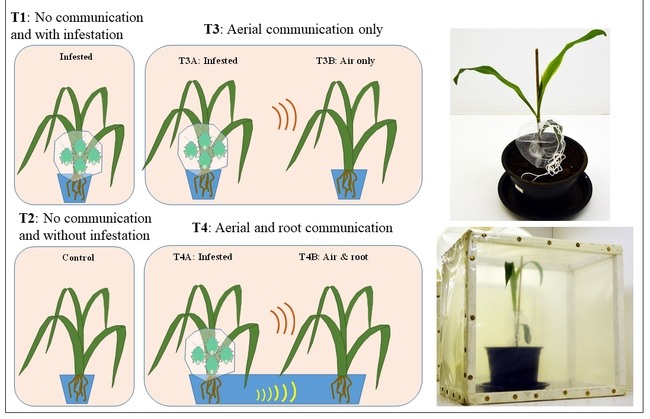