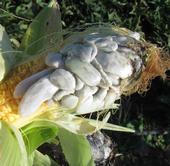 Corn with huitlacoche growing on the kernals.

Huitlacoche is corn smut — a fungus that often infects sweet corn during times of drought. It enters the plant through the ovaries, and replaces the corn kernels with large tumor-like spores that look like really ugly mushrooms. Farmers in the U.S. have spent millions of dollars trying to eradicate the infection. The UC Davis Student Farm has a bad case of corn smut this year, and it’s threatening to ruin their entire crop.

But it may not be such a bad thing. Often known as the...