Jay Ruskey, left, and Mark Gaskell, shown at a coffee tasting in 2015. They planted their first California coffee field trial in 2002.

Coffee is being commercially grown in California and coffee drinkers can't get enough of the locally produced beverage, which currently retails for about $18 per cup. Anyone who is interested in growing, processing or marketing specialty coffee in California is invited to a Coffee Summit on Jan. 18 at Cal Poly Pomona.

Until recently, American coffee was grown commercially only in Hawaii. To make the most of their precious water, California farmers have begun experimenting with coffee plantings and producing beans that fetch a premium.

“There are about 30,000 coffee trees now planted on about 30 farms and that acreage will continue to grow during 2018 with programmed new plantings,” said Mark Gaskell, UC... 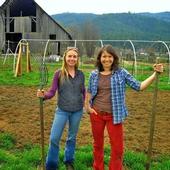 The farmers of Five Foot Farm.

This time of year, most farmers don't get much sleep. Tomatoes, pears and peaches often ripen in the Sacramento Valley faster than the harvest crews can pick them, even working 12-hour days. But this is also the season that some farmers are happy to show off their farms to visitors, inviting guests to enjoy the delightful flavors and beauty of the harvest in a pause from the bustle. UC Cooperative Extension hosts an online agritourism directory and calendar, www.calagtour.org, to help Californians find farms and ranches to visit. Here are a few upcoming opportunities for summer fun on California farms, pulled from the calendar:

One reason for the successful economic miracle occurring in Rwanda today is its thriving specialty coffee industry that, along with tea, accounts for a large percentage of the country’s exports. Despite this success, however, coffee from Rwanda and neighboring Burundi is plagued by a condition called potato taste defect (PTD) in which a few coffee beans impart an odor and flavor reminiscent of rotten potatoes.

So pernicious is PTD that its occurrence can downgrade the value of the entire crop by a fourth or a third. Worse yet, PTD is only apparent after processing, roasting, grinding and brewing, and can occur long after the coffee has been shipped abroad.

Thought to be caused by chemicals produced by microbes that...