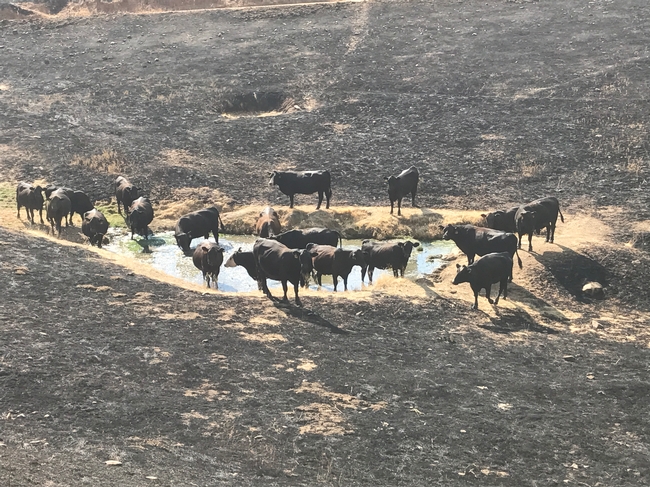 Tony Toso's cattle gather at a watering hole after the Detwiler Fire in Mariposa County in 2017. During disasters, ranchers need access to their livestock to ensure they are out of harm's way and have food and water. Photo by Tony Toso

When the Detwiler Fire broke out near his family's ranch in 2017, Tony Toso was home to take defensive action to protect his family and animals. The Mariposa County rancher feels fortunate that he was on site.

“We were on the front end of the fire damage and it started on a Sunday,” recalled Toso. “Had I not been home that day, it would have been very difficult for me to access my property and help keep our livestock safe. Within a matter of hours of the fire starting, the CHP had our county road closed and would not let anyone in.”

Emergency personnel close roads around wildfires for the safety of people and to prevent them from impeding fire suppression efforts. When fire threatens large ranching operations, ranchers need to move their livestock out of harm's way and make sure they have feed and water. While volunteer groups can assist in rescuing dogs, cats, and a few sheep or horses, they don't have a rancher's knowledge, expertise and experience that are essential for managing hundreds of cattle at large-scale ranching operations.

To help rural communities prepare for wildfire, it would be helpful for farmers and ranchers to have a plan in place to coordinate with first responders, according to Max Moritz, UC Cooperative Extension wildfire specialist. Ag Pass is a program developed in Ventura County to identify farmers and ranchers to firefighters, law enforcement and other emergency personnel so they can allow them onto their property to rescue animals and identify access roads and water sources.

“Because fires are increasingly impacting people and are not going away anytime soon, we need to figure out approaches to sustainably live on fire-prone landscapes. In a broader sense, the Ag Pass is another way that we can adapt to, and coexist with, wildfire,” Moritz said.

Matthew Shapero, UC Cooperative Extension livestock and range advisor, and Moritz have written a publication to guide people who would like to create an Ag Pass Program for wildfire preparedness in their own locale.

“Our neighbors had cattle just north of us and they tried to get in and could not,” said Toso. “An Ag Pass in that situation, would have been a huge benefit had I not been at home and then wanted to access my property.”

In Ventura County, agricultural workers can apply for identification cards from the Central Ventura County Fire Safe Council, which verifies farm information through the county's pesticide applicator permit database. Ag Pass members provide detailed maps of their farms that show access roads – including many that don't show up on other maps. 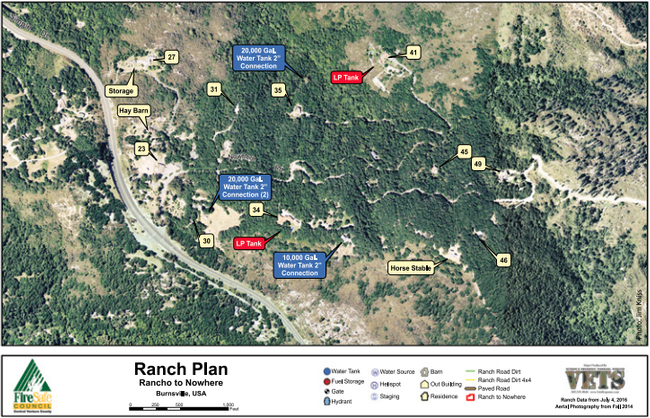 Shapero, who works in Ventura and Santa Barbara counties, has been working with ranchers and county agencies to create an Ag Pass program in Santa Barbara County. “The last few fire seasons have made a program like the Ag Pass more urgent than ever, especially as awareness of wildfire's impacts to agriculture has grown,” Shapero said. “We hope that this publication provides localities with a workable blueprint that will expedite the adoption of this or similar programs.”

“After being at the Carr, Sonoma, Creek and Camp fires for months at a time, I started developing the program from the fire side and presented it to California Cattlemen's Association a couple years ago,” Stornetta. “This was a great collaborative effort. After meeting with our fire safe council, we are looking at the program being fully adopted very soon.”

In September, the Bear Fire raged through the Plumas National Forest where 400 of Dave Daley's cattle roamed to graze. The fifth-generation rancher wrote in moving detail of his grueling search for surviving cows in the rugged terrain during the wildfire and posted it to the California Cattlemen's Association website. 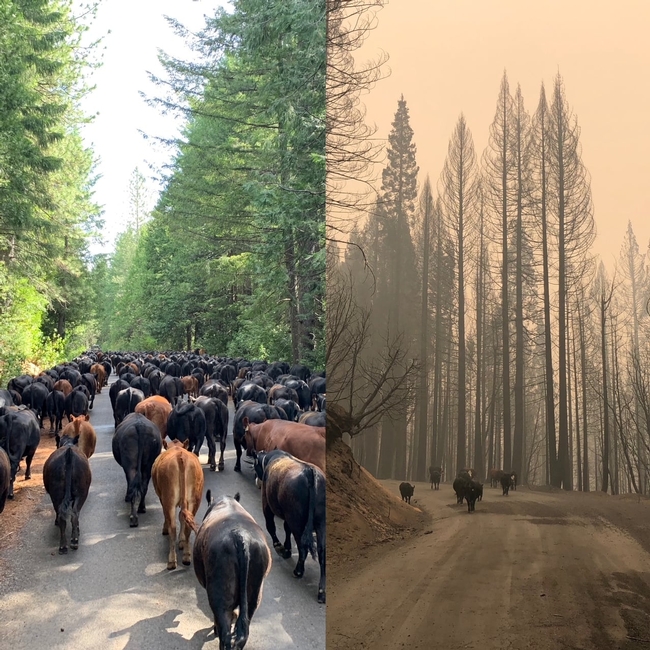 On the left, Dave Daley's cattle headed into the Plumas National Forest to graze before lightning sparked the North Complex Fires. Right, he rounded up survivors to escape the wildfire. Photo by Dave Daley

“I was unable to get access initially,” Daley said. “After working with our sheriff, I was able to get access through his office. But it required a deputy to take his time every day for 10 days to meet me at the roadblocks and escort me for several miles into our cattle range. I am very thankful for their willingness to do so. However, it was probably not the best use of their time when they were dealing with so many crises simultaneously and the fire was still raging. If there had been an Ag Pass system, that would have simplified the process, freed up law enforcement and given me a chance to save more cattle.”Toso, the Mariposa County rancher and president of the California Cattlemen's Association, thinks a program as described in the UC Cooperative Extension publication benefits both ranchers and first responders.

“We can not only help protect ranching families, but we can use the opportunity to build working relationships and create trust between landowners and emergency personnel, as well as provide valuable information to those first responders from knowing the lay of the land,” he said. “Helping other counties and our member ranchers get a program on the books with their respective counties will be a priority for our organization.”

“Given each community's unique agency and personnel structure, it is our belief that the Ag Pass is best administered at the local or county level, however we are working with the state to see if policy measures can be developed that would simplify and support the Ag Pass concept,” Shapero said.

The training developed for Santa Barbara County includes an overview of hazards and safety issues, entrapment avoidance, incident organization, fire behavior, working with law and fire liaisons, access to incident, carding and certification. Stornetta anticipates the Santa Barbara County training will be held in spring 2021 and hopes it can be used in other counties as well. Ranchers who are interested in the Ag Pass training should contact Stornetta or Shapero.

“Preparing for Disaster: Establishing an Ag Pass Program in Your Community,” can be downloaded for free at https://anrcatalog.ucanr.edu/pdf/8685.pdf.

Reposted from the UCANR Knowledge Stream

Catastrophic wildfires are becoming more frequent, more intense and more destructive in California. They are burning in a variety of vegetation types — from high-elevation northern-Californian coniferous forests to southern-Californian chaparral ecosystems — and some (e.g. the Thomas [2017] and Tubbs, Sonoma County [2017]) have been fanned by unusually strong wind events. Despite these differences, however, there is broad consensus that a major part of the uptick in catastrophic fires is the state's failure to adequately manage fuel loading in range- and forested lands. Traditional and targeted grazing can and do manage fuel load in rangeland and forested lands.

The state is currently in the process of finalizing a document, the California Vegetation Treatment Program (VTP), which will serve as an update to their 1980s document, “Vegetation Management Program.” This unwieldy document serves as the blueprint for how the state will strategically approach fuels management. Practices such as mechanical treatments (e.g. mowing, mastication), manual (e.g. weed-whacking, weed-pulling), herbicide application, and prescribed fire will be included in the VTP, as they were in the 1980s VMP. One remarkable new addition, however, will be the inclusion of grazing as an approved fuels management treatment. Accordingly, there is renewed effort around the state from the livestock and ranching communities to communicate how domestic livestock can be integrated into a responsible, long-term fuels management program.

Fundamentally, we need to think about two kinds of grazing: 1) what might be called “traditional” grazing, and 2) what might alternatively be named “targeted” grazing. Traditional grazing is how we have always thought about grazing: in California, cattle are managed in extensive rangeland pastures to produce meat. Alternatively, the ultimate purpose of targeted grazing is to have a particular species of livestock graze at a certain density for a specific period of time for the purpose of managing vegetation. In this model, the saleable product is not meat, milk, or fiber, but instead acres of biomass cleared, thinned, or removed.

Importantly, however, it should be noted that both kinds of grazing can and do manage fuel loading in range- and forested lands in California. This is a point the ranching community has worked hard to make in the popular press recently. See, for example, the recent video produced by the National Cattlemen's Beef Association featuring cow/calf producer Richard Atmore of Ventura, California, discussing how grazing on his ranch just outside the city limits reduced impact of the Thomas Fire on urban residents. (https://www.facebook.com/watch/?v=2365669617085882). My own experiences conducting soil and rangeland monitoring after the Thomas Fire confirm the same phenomenon. All five of the ranches I sampled had areas of grazed grassland that did not burn at all during the fire immediately next to shrubland areas that burned at a high intensity [see Figure x]. In this way, it is critical to recognize the good work that traditional grazing already does to reduce the sorts of fuels that might otherwise exacerbate fire in wildlands or on the wildland-urban interface.

But again, targeted grazing is different. It is an old idea (livestock grazing) applied in a novel manner. Increasingly, homeowners, private land owners, municipalities, public agencies, and utility companies across the state are using grazing animals where it's too steep to mow, too labor-intensive to hand-pull weeds or run a masticator, too challenging to execute a prescribed burn, or too expensive to apply herbicides.

It remains to be seen, however, how effective targeted grazing with cows, sheep, and/or goats will be on the Central Coast. While there is ample evidence that these livestock species will consume the naturalized annual grass species common in the area, there is less direct evidence of their ability to consume shrub and sub-shrub species common to our local chaparral and coastal sage scrub communities. Certainly, more work and experimentation will need to be done if and when targeted grazing for fuel load modification becomes more widespread. Animal genetics (insofar as it may impact an individual animal's preference for certain plant species) and augmenting the timing of use may both be important factors that will influence success. Research suggests that targeted grazing might be most effective 1) in the years after a wildfire, when large-diameter shrubs have been removed and begin to regrow; 2) as a follow-up to maintain other fuel treatments, like mastication; or 3) as a way to thin fuels — though not necessarily to remove them entirely — to reduce fire intensity and rate of spread.

It is important to recognize that targeted grazing is not exactly like running a traditional ranching operation, and targeted grazing operators face a unique set of challenges. They must be mobile (with their fencing, stock water, handling equipment, etc.), they must provide protection from livestock predators (if running sheep or goats), they must know how to effectively communicate with landowning clients and the general public, and they need to be certain they can provide forage for their livestock year-round (even if the paying jobs are seasonal). As new operators that may or may not have previous livestock experience increasingly offer their services, it will be important to provide resources to ensure their success.

California's decision to formally recognize grazing as an important fuels management practice in their forthcoming Vegetation Treatment Program should have a profound effect on the frequency and scale of use of both traditional and targeted grazing. It is an exciting opportunity for the livestock industry to meaningfully help address and provide solutions for the wildfire threat in our region.