As I sit down to write this article, my wisteria is in full stunning bloom. No leaves are present yet, but as the blooms fade, the leaves will appear.

This plant and cuttings from it have been in my family for many years. When we first moved to Napa, we lived in a Victorian downtown and this plant was growing up the side of the house. I took cuttings from it and one went to my mother's home in Calistoga where it might still be growing. She moved to Napa and I gave her another which grew very well in her new home. I took a cutting from that plant and planned to make a bonsai of it but eventually put it in the ground against a fence in my garden.

It continues to grow and the only attention I give it is trimming it back in summer and winter. After each pruning in summer, when I take off the seed pods, it reblooms. It has bloomed up to four times in one summer. The rebloom is never as great as the first bloom of the year, but I enjoy seeing the flowers.

I also cut back any of the long stems that come out all over the plant. For all these years it has continued to grow and flower without any fertilizer, water (apart from rain) or other attention. It seems to thrive on neglect.

If you leave the seed pods on the plant, they will ripen and shoot seeds out several feet. Unless you want a forest of wisteria, don't allow these seeds to sprout.

The wisteria is a member of the pea family and is native to China, Japan and parts of North America. The seeds of Chinese wisteria (Wisteria sinensis) were brought to the U.S in the early 1800s and the Japanese variety (Wisteria floribunda) followed in the mid-1800s. Plants grown from seed can take up to 20 years to bloom so nurseries imported plants as soon as they were available.

Wisteria is considered an invasive species in most parts of the U.S., although not listed as such for California. The so-called Kentucky wisteria (Wisteria macrostachya) is not invasive. I once knew a Napa County Master Gardener who lived in a very old house with wisteria planted on one side. Over time, the wisteria spread by roots to the other side of the house. So, my advice is not to plant this vigorous plant by your house.

Asian wisterias bloom on old wood and before the leaves appear, while Kentucky wisteria blooms on new growth when the new leaves have appeared. What's known as American wisteria (Wisteria frutescens) does not have invasive tendencies. The flowers come in shades of purple, pink or fuchsia; however, purple is the most common. Some plants are hybrids and can only be reproduced by grafting. Some of the flower clusters can be two feet in length.

The use of wisteria in bonsai has been common for years. Some of the bonsai are outstanding, with huge trunks. These large specimens are usually collected by “urban collectors,” bonsai hobbyists who adopt plants when homeowners take them out.

One of my neighbors has a wisteria that has been trained into a small tree. All the side growth was removed, and one trunk was allowed to grow from which all the leaves and flowers emerged. This style of wisteria must be groomed constantly to keep the shape.

If your wisteria has not bloomed and you have fertilized it, it may be suffering from too much nitrogen. Like other members of the pea family, wisteria roots have nitrogen-fixing abilities. While related to sweet pea, wisteria is poisonous to humans and animals.

Wisteria vines will grow up trees, trellises, houses or whatever they can find. They have been known to break the support they were growing on, so if you have a wisteria, keep an eye on it. 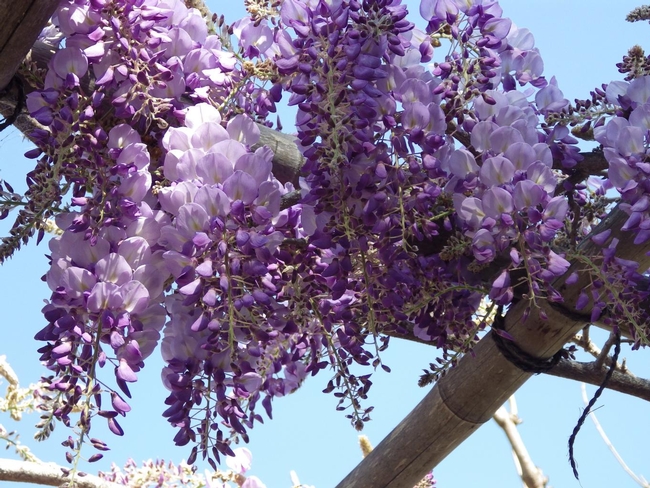 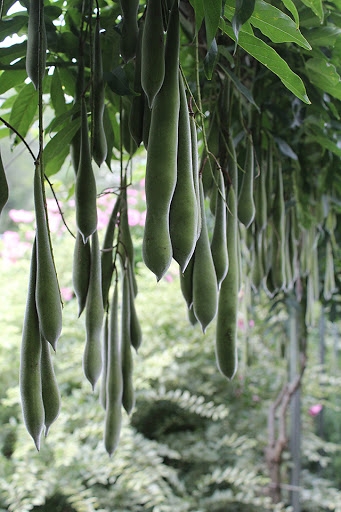 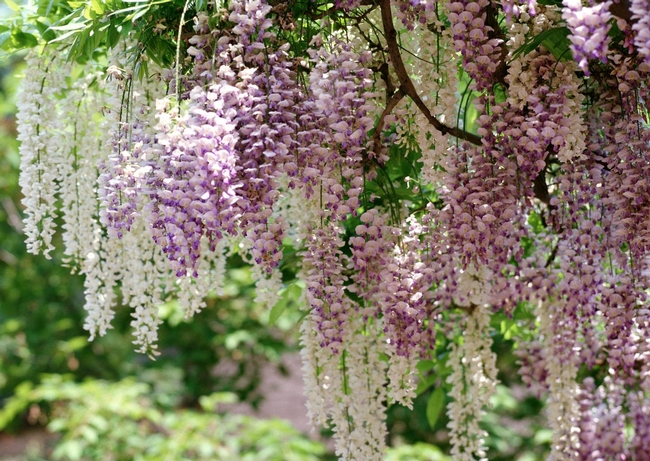 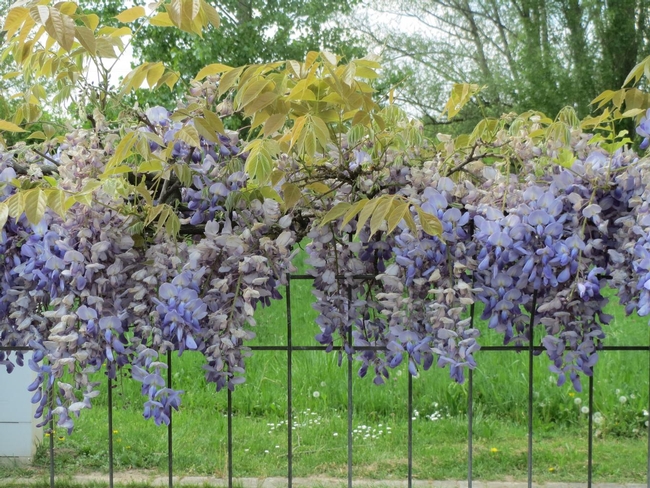 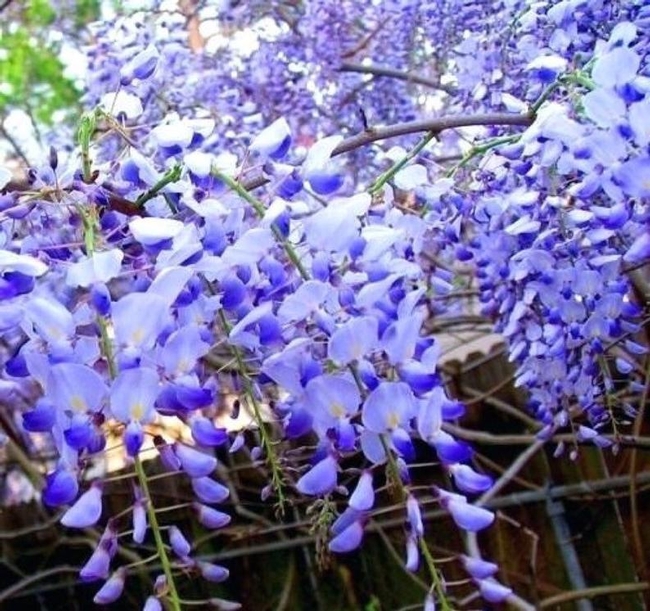 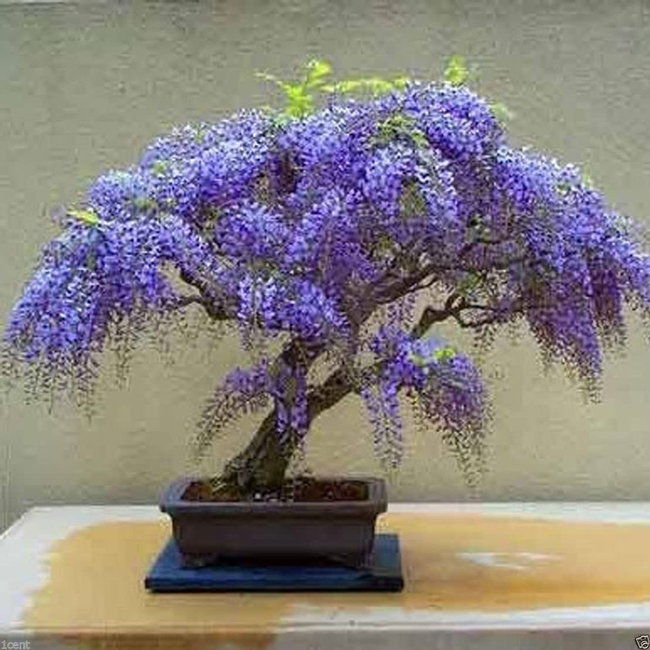 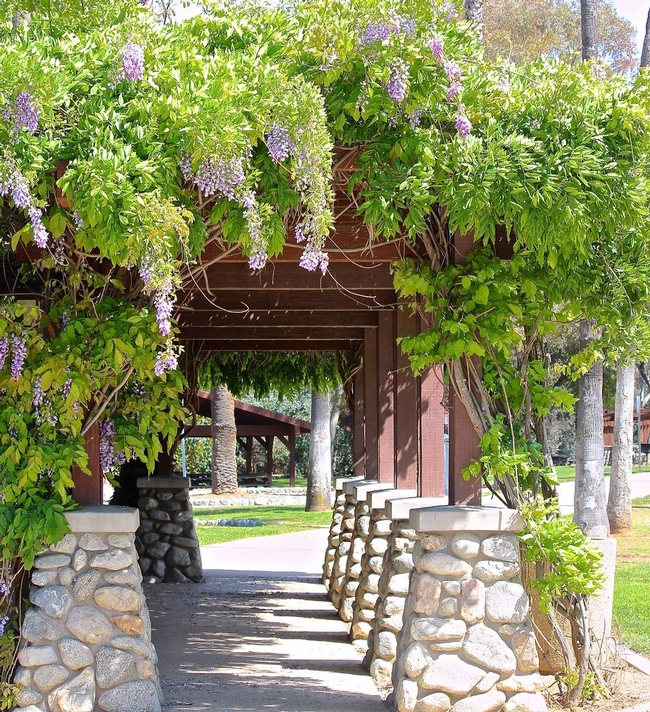 Great on an arbor (Free-Images.com) 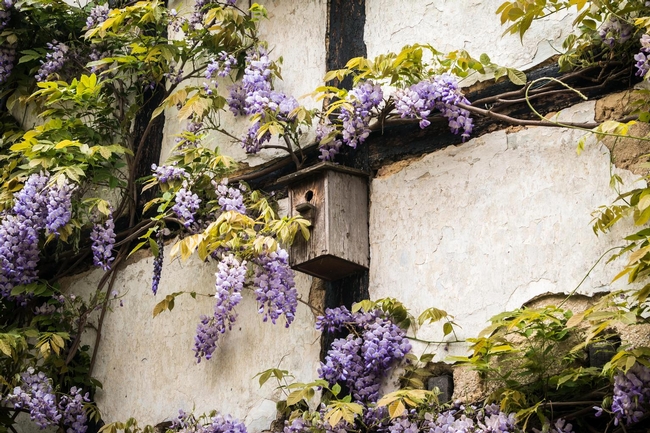