Last month I contributed a small article for Rice Farming Magazine. I used data generated by the UC Weed Project to illustrate the point of how difficult, complicated and expensive weed control can be once herbicide-resistant weeds are established in a field. Well, a very observant PCA noticed that there was a mistake in my example. Here it is: "However, if dealing with ALS-resistant watergrass and propanil-resistant sedges, this program would be a failure. In this case, a more appropriate program may consist of application of a tankmix of Granite GR and Shark at the 2.5 leaf stage of rice, followed by application of a tankmix of Abolish and Regiment at the 5 leaf stage of rice." Obviously, you can't tankmix Granite GR and Shark! What I meant to say was, a same day application of Granite GR and Shark at the 2.5 leaf stage. This base application gave very good control of umbrellasedge and broadleaves, good control of bulrush, but mediocre control of late watergrass. The follow up application of Abolish and Regiment resulted in excellent control of all weeds.

Apologies for the confusion! 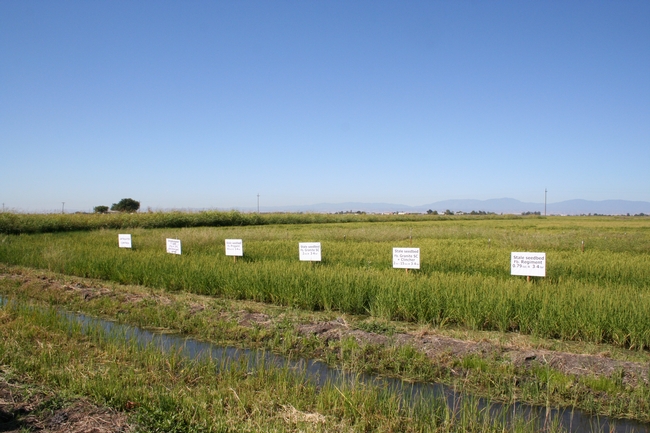 Japanese millet is not a weed of rice in our area. However, a PCA recently noticed it in an organic rice field. Japanese millet is in the same genus as our common watergrasses, and looks similar, but is much more robust. It seems to grow well under flooded and dry conditions. The presence of this plant in the organic rice field was puzzling. Then the PCA learned that the field had been in pasture the year before. Most likely, the Japanese millet was part of the mix of grasses seeded as pasture and produced seed that survived the winter and germinated in the flooded rice field.

Unusual find, hopefully we won't see it ever again!

Winged primrose willow is an invasive weed that was identified in Butte County rice fields in 2011. Most infestations were along borders of fields and canals; however, this weed can thrive in the flooded environment within rice fields. Winged primrose willow can disperse through seeds and plant fragments floating in the irrigation water and tillage and harvest equipment.

After the initial discovery of winged primrose willow (Ludwigia decurrens) in Butte county, it was determined by Farm Advisors and the Agricultural Commissioner that the infestation expands over several square miles. Most infestations are along borders of fields and irrigation canals. One field had an infestation throughout. It is likely that this weed has gone undetected for up to five years or more. Seed capsules from this plant have thousands of seeds which are capable of floating on the water surface as a means of dispersal, especially along irrigation canals. Indeed, the Butte County Agricultural Commissioner believes this has been the main means of dispersal across the majority of the infested area. Other potential means of spread are by tillage equipment and combines. Additionally, it has been determined that plant fragments have the ability to grow roots within a day or two when in water. This suggests that mowing of levees as a means of control may potentially increase dispersal of this weed.

Testing in the greenhouse at the Rice Experiment Station indicates that the plant germinates best when the soil is moist but not flooded. However, the seed can germinate under water and eventually grow above the water surface with the potential to survive in a rice field and set seed. This plant also has the ability to form roots that grow upwards through the water column in order to scavenge oxygen near the water surface. Glyphosate will control this plant on levees, but any formed seed capsules will have viable seeds that will likely germinate the next season if not removed from the field and buried in a landfill as requested by the Agricultural Commissioner. It is suggested that any levee spraying of known infestations happen early in the season prior to the yellow flowers being visible. Testing of currently available rice herbicides indicates several potential options for control of this invasive weed within rice fields. We tested early season water active herbicides (Table 1). This was done at early water flood and on larger, more established weeds. The early flood treatment entailed moistened soil for 3 days prior to the flood being established. This was intended to simulate the flooding of large fields where the soil is moist as water is built up for flood. Winged primrose willow will germinate under this conditions prior to flood. Herbicide treatments were applied after the flood was established. The later timing entailed plants that were allowed to establish and grow to approximately 2.5 inches in moist soil, then the flood was established and herbicide treatments applied. This treatment method was intended to be similar to a drill seeded situation where into water herbicides could be applied after establishment of permanent flood. In continuous flood, Cerano caused bleaching and eventual death of the small plants. The later application of Cerano slowly bleached the plants and it is believed that they will not be able to produce viable seed. Bolero Ultramax activity was fairly slow, but eventually killed both young and older plants when flood was maintained. Granite GR slowly bleached the young plants and it is expected to fully control the weed at that stage; however, more established plants survived the treatment and would likely set seed. Shark H2O initially appeared to be very efficacious on both plant sizes; however, plants were able to survive the treatment by putting on new leaves. These plants eventually flowered and would be expected to produce viable seeds. Sandea applied to the flood water did not control the weed although it caused some malformations of the typical plant. It is likely the plants surviving the Sandea treatment would set seed. Regiment did not control either young or old plants. Granite SC also did not fully control either age of plants. Sandea and Londax, however, appear to control the weed sufficiently when it is young but less effectively when it is more established. Shark H2O initially appeared to be the best treatment with rapid severe burn of leaves, but the plants recovered by producing new leaves. These plants eventually produced flowers and would be expected to have viable seed. SuperWham provided some control when the plants were small, however the more established plants were not significantly hindered. Grandstand caused severe damage to both young and established plants. The tank mix of SuperWham and Grandstand was the most efficacious of all the foliar treatments. A new weed has been identified in California rice. Its name is winged primrose willow (WPW), and it is a weed in rice fields in the southern US. So far this weed has been identified only in fields near Richvale.  The Butte County Ag Commissioner is working to make sure this weed doesn't spread to other areas. The UC Davis Rice Weed Science Project and UCCE is collecting information about its biology, possible impact and management. This is NOT WPW, this is the waterprimrose that we usually see around field borders, notice the prostrate habit This is NOT WPW, common waterprimrose flower has 5 petals If you suspect you have WPW in your field, call any of the UCCE Rice Advisors or your Ag Commissioner.