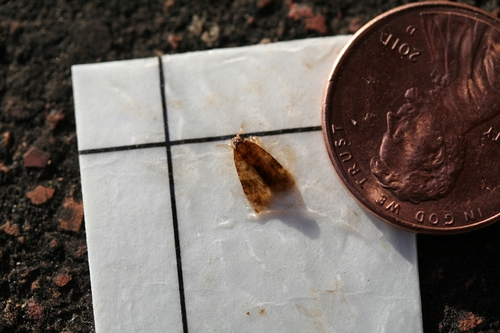 The following description of what regulatory activity in blackberries is going to look like was kindly provided to me by Leah Gayagas from the USDA PPQ.

A 5 mile radius of regulatory rigor has been drawn around the initial two European grapevine moth finds on Pleasant Valley Road.  For us in the berry business, blackberries are the only ones identified as possible hosts, so raspberries and strawberries are not included in this list and are not of concern.

Currently, what this regulatory activity means for blackberry growers in this 5 mile radius is that there will be inspections of their production fields.

In field inspections will consist of the grower assigning some of his or her pickers to retrieve at least 20 lbs of harvestable fruit from a pattern which covers the whole field, which would probably consist of a trip around the perimeter of the field and then a ‘Z’ pattern on the inside.  Considering what is at stake here, it would be best for the grower to assign the best of his or her crew to this assignment to make sure the very best of the field is harvested.

Harvested fruit are then lain out on a table and closely inspected by USDA personnel.

What follows is quite important:

Please be on your toes people!

Blackberry growers in the Pajaro Valley should be aware that there are substantial numbers of light brown apple moth (LBAM) larvae active in many fields right now.   The photos below outline what this pest looks like and what it is doing right now in our blackberry fields.

In the photographed field, there were on the order of 7-9 leafrolls per two feet of hedge in the heaviest infested areas and in excess of 80% of the leafrollers sampled in the photographed field were identified as having a very high likelihood of being LBAM.  This is very concerning, since under the current quarantine enforced by the USDA, the presence of any leafroller in a field can be cause for significant delay of harvest much less outright field closure if an LBAM is found.

While clearly not the level of devastating 100% loss of harvest caused by field closure for a positive LBAM find, LBAM itself is also capable of causing some damage.  As one can see from the photos below, damage ranges from incidental feeding on flowers resulting in blemished (thus unmarketable) fruit to heavier feeding causing abortion of entire laterals and the subsequent loss of fruiting potential there.   In the field photographed below there was damage of some sort to one of every sixteen fruiting laterals.

Anecdotally, it appears that growers who kept up with changing out pheromone based twist ties every four to six months have very low populations of LBAM suspect leafrolls, while those who allowed pheromone coverage to expire before putting up a fresh set are tending to have heavier, in some cases very heavy, larval infestations.  If one is not going to be using pheromone based twist ties through the entire year, it is at least a good idea to put out a few pheromone traps to find out when adult males are starting to fly and looking to mate so as to better target use of mating disruption techniques.

As it seems many of the larvae being discovered currently are in the fourth to late instar stage (½ to ¾ inches in length), applications of Bacillus thuriengiensis formulations will not prove to be very effective.  Better materials are the spinosyns, one of which (Entrust) is registered for use in organic fields, and bifenthrin (hard on beneficials though).  Addition of a good surfactant is always a good idea to break spray water surface tension to facilitate movement of material into even the tightliest wound leafroll.

There are several insecticides mentioned for control of light brown apple moth in this article.  Before using any insecticides, check with your local Agricultural Commissioner's Office and consult product labels for current status of product registration, restrictions, and use information. 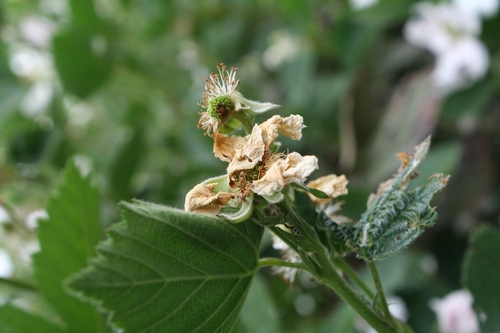 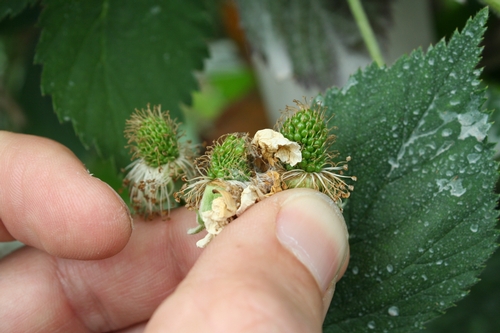 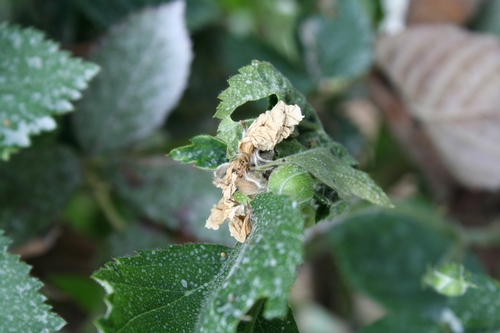 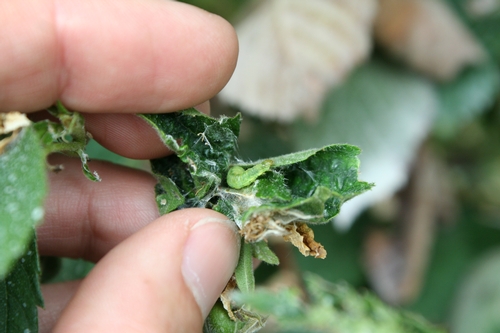 This article is to share some information regarding orange rust in blackberries on the Central Coast.  Apparently, this fungus was detected last year and it continues to spread.  Previously only seen in some local plantings of Chester blackberries it has now been found on several occasions in proprietary blackberry plantings.  Orange rust is a tough disease to deal with, so it is worth being able to identify and knowing what steps one needs to take to mitigate its spread.

Orange rust is caused by two fungi, Arthuriomyces and Gymnoconia which are distinguished by the shape of their spores and life cycle length.   Their growth is favored by cooler temperatures and high humidity.  While it is not common that orange rust infected plants die outright, their ability to produce fruit is severely compromised.

As readers can clearly see in the photos below, orange rust is hard to miss in the field.   From further away, infected canes have a spindly appearance and on approaching one will see the upper leaf margins of both primocane and floricane framed with the distinctive orange of the fungal infection on the underside of the leaves.

Of all the rust fungi that we deal with in caneberries on the Central Coast, orange rust is unique in that it grows systemically in the plant, meaning that the most important management tool for growers dealing with an infestation of orange is a shovel.  There is no effective fungicide for orange rust. Infected plants should be removed entirely, meaning all canes, leaves and the roots.  This is best done before the pathogen spores are ready to be spread by rain and wind in mid-April through May. 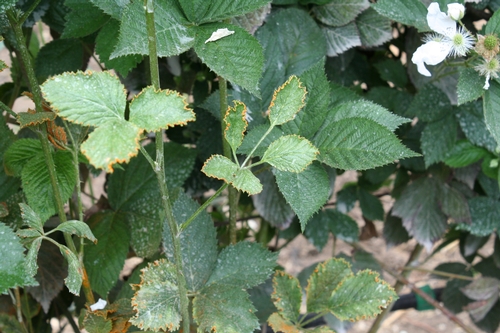 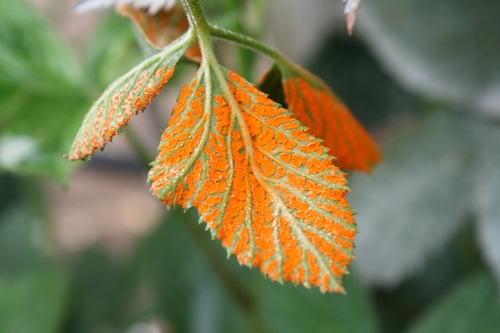 Underside of leaf infected with orange rust
Tags: blackberry (18), orange rust (2)
Comments: 19
Downy Mildew in Blackberries
Published on: March 3, 2009
Blackberry growers should note that the moderate rains taking place in ambient temperatures of 65 to 75 degrees F as they are now are excellent conditions for outbreaks of  downy mildew. The most recent outbreak was in the spring of 2005 and resulted in significant yield reductions on susceptible varieties.
Downy mildew is caused by the fungal pathogen Peronospora sparsa. This pathogen infests almost all of the proprietary blackberry varieties, Ollalieberry, and is devastating to Boysenberry. Conversely, varieties such as Chester, Arapahoe, Apache, Navaho and the other so called “Native American named varieties” are fairly resistant, with very little disease appearing even in the most amenable conditions.
Downy mildew first appears as a yellow discoloration on the upper leaf surface, followed by a red to purple discoloration which is oftentimes framed and limited in growth by leaf veins, giving the lesions an angular appearance. These blotches will appear as light pink or tan areas on the leaf underside, often accompanied by whitish spore masses (see photos below). As favorable conditions persist and the disease advances, these lesions expand to cover the whole leaf, and eventually the whole leaf turns brown. Severely infested leaves may fall off the plant.
Infested flowers often result in fruit which is crumbly and not sound, while fruit infested with downy mildew at the green stage will shrivel and dry out. Fruit infested at the mature stage takes on a dull pallor, followed by similar shriveling and drying out. Downy mildew affected fruit will sometimes split into two parts.
The downy mildew pathogen is understood to overwinter as fungal mycelium in the plant roots, crowns and canes. As new shoots emerge in the spring, the pathogen follows the growing point, infesting stems and new leaves. Given the right conditions of moisture and temperature, these infested leaves are then the primary sites for further infestation of the plant.
Practices which limit the duration of periods of moisture around susceptible blackberries will reduce risk of disease. Removal of weeds and excess suckers around the base of fruiting canes allows more air circulation and may limit disease establishment and spread.
The dryness of covering hedgerows with macro-tunnels is unrivalled in reducing the incidence and severity of downy mildew disease in blackberries.
The fungicide often recommended for use in controlling downy mildew is Aliette (fosetyl aluminum) used as a foliar application. Growers planning on using Aliette should bear in mind the restriction of not being able to harvest fruit for 60 days after application of this material.
Although not fungicides, phosphorous acid fertilizers are successful in limiting downy mildew in blackberries. Growers should be certain that they are purchasing products containing phosphorous acid, as opposed to phosphoric acid which does not exhibit the same capability of limiting downy mildew. Additionally, all products sold as nutrient solutions must state the phosphorous content in terms of phosphoric acid equivalents, even if they only contain phosphorous acid. Products such as Phosgard, Nutriphyte and Fosphite all contain phosphorous acid.
There is a fungicide and several other products mentioned for control of downy mildew in blackberries in this article. Before using any of these products, check with your local Agricultural Commissioner's Office and consult product labels for current status of product registration, restrictions, and use information. 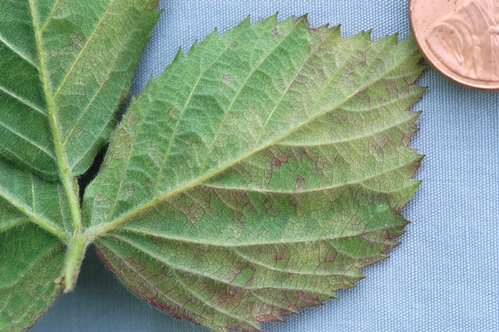 Photo courtesy Steve Koike, UCCE
Downy mildew on underside of blackberry leaf. Note yellow discoloration, this is where the white spore fungal masses would be seen. 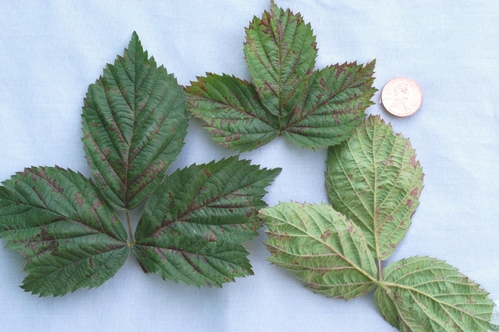 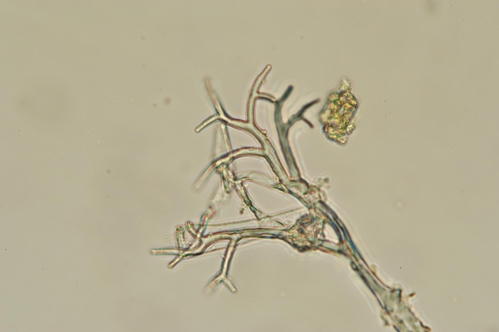