The savage heat of the past few weeks has really wreaked havoc on our blackberries.  Normally thought of as being fairly stalwart sorts of plants, relatively easy to grow with few disease and insect issues, blackberries seem to be revealing themselves as a bit sensitive to high temperatures.

Not only are we seeing many, many cases of white druplet and subsequent necrosis (first photo), but also leaves of plants, especially at the margins (second photo), are being burned.  Close readers of this space will know that white druplet is caused by intense ultraviolet radiation, and that the marginal burn of leaves probably means that the plant is not keeping up in moving sufficient water to its extremities.

Most galling however has been the large amount of red druplet disorder, better known as reversion.  As one can see from the third photo below, reversion is a nuanced reddening of pretty well the whole fruit (as opposed to the starkly demarcated reddening caused by redberry mite - see elsewhere in this blog).  This occurs post-harvest, meaning the fruit looks just fine at harvest and only reddens when it's been in the cooler for a bit.

It's almost certain that this fruit reddening is being caused by rapid and large changes in temperature. Research has shown that fruit with an internal temperature of over 72.5o F followed by a fairly rapid drop to cold is most likely to experience red druplet disorder.   Given that in our pronounced heat spell over the past few weeks, with temperatures in production tunnels up to and even exceeding 110o F (see photo below), and movement of fruit from that environment to the mid 30's of the cooler (a drop of more than 70o F) being the embodiment of a large, rapid change in temperature,   then perhaps having a huge amount of reversion shouldn't be so much of a surprise.

Ways to avoid this problem during high ambient temperatures are to avoid getting fruit that hot into the box in the first place. To whatever extent possible, early picking and quick transport to the cooler are clearly best.  The other, which has been explored by researchers and may be in effect in some areas, is a staged cooling which gradually brings down the temperature to avoid the rapid shock of what forced air at 35o F imposes. 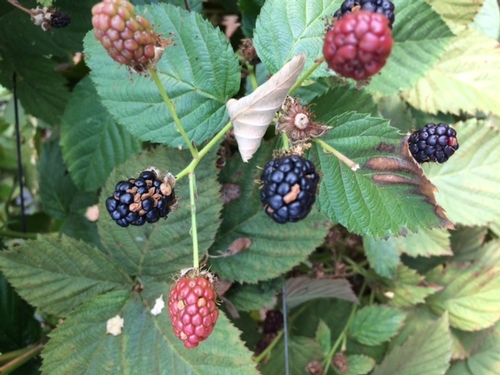 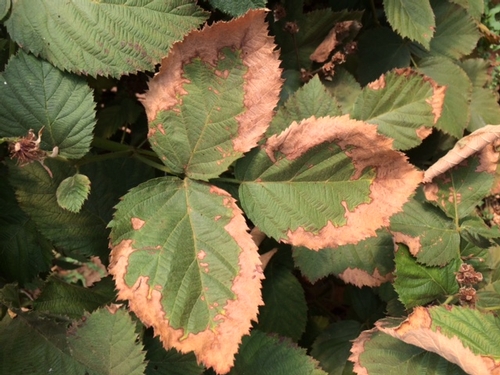 Blackberry leaf margins scalded by the sun and heat. 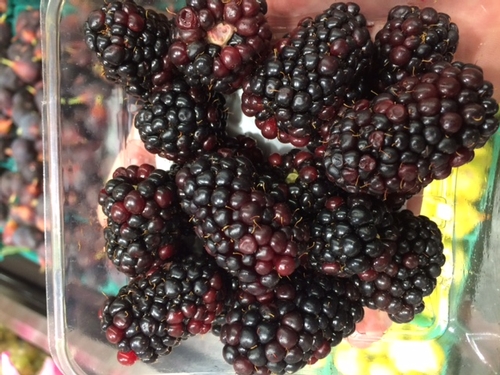 Reversion in blackberries I found at the store on September 9.