The hills are alive with the sound of BEE-EEZZE. And often they are found crawling on the ground, as is the case of Digger Bees. At this time of year, they might be seen along the margins of avocado orchards, near hiking trails  or in undisturbed areas of citrus orchards. They are called Digger Bees commonly, but this is just a generic name for a large group of bees that nest in the ground. There are many genera and species and because of the general lack of study of these bees they are lumped under the name Digger for lack of any greater knowledge and naming of them. In the case of this bee find reported here, they are possibly Diadasia bituberculata – as suggested by Robin Thorpe, retired UCD entomologist. They are uncommon in the rest of the world, but found here in California and western US.

There are several kinds of small hairy or metallic bees that dig into the soil to nest, hence the common name, digger bees. They are a diverse group that comes from different families and the term digger bee can include the andrenid bees, halictid bees, and colletid bees such as the plasterer and yellow-faced bees. These are solitary bees and native pollinators that are active early in the season. Each female digs a cylindrical underground tunnel as a nest where she reproduces (as opposed to social bees such as honey bees where only the queen reproduces and maintains a colony with the help of sterile workers). Although solitary, they form colonies that may have several hundred nests in one spot, but all nests are independently owned.

The subterranean nest is provisioned with a mixture of nectar and pollen collected from nearby flowering plants. This "bee-bread" is food for the bee's offspring (larvae) that develop in the underground chamber and emerge as adults the following year.

Digger bees are 1/4 to 1/2-inch-long and variable in color (mostly shiny metallic or dark, but some with markings of white, yellow or reddish brown). There is one generation of digger bees per summer and once the adults finish perpetuating the species by laying eggs of the next generation there will be no activity till the following spring.

Digger bee nests are commonly located in areas where grass and mulch are scarse, either from too much shade, previous drought conditions or other stress. Most of them like to fly around their airspace at different times of the day, something to do with mating, air temperature or staking territory. They often travel great distances to forage.

The threat of being stung by digger bees is unlikely. The bees are docile and not likely to sting unless handled or threatened. There is no nest guarding behavior or attack behavior like there is with social insects such as honey bees and yellowjacket wasps. 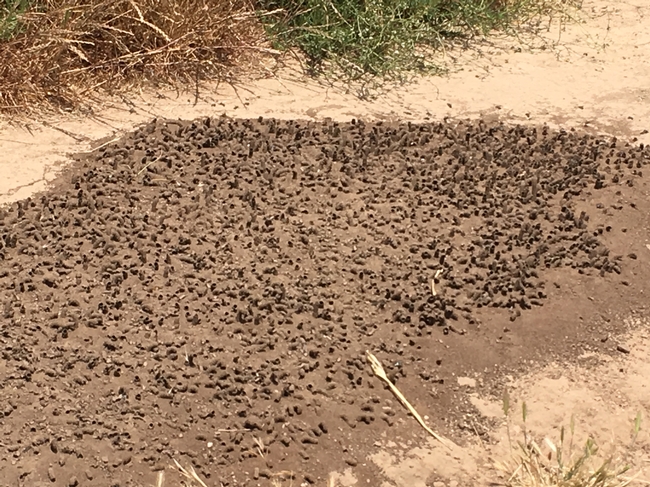 We hear about the decline in honeybees (non-native, from Europe and the most commonly managed bees), but native bees are declining too and in many instances these are the pollinators of California avocado. The loss of any pollinators is a loss for agriculture as well as the environment. But here are the loss charts.

Next year will be better. 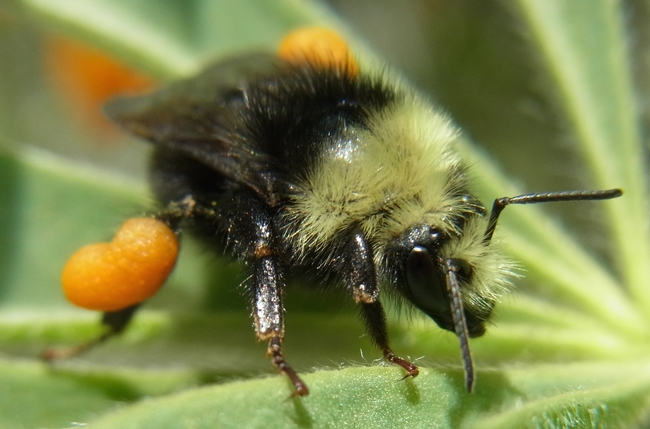 Two years ago we set out to study the impact of native bees on avocado fruit set.  We applied for several grants unsuccessfully and turned to growers to see if there was interest.  We raised $6,000 to start the project and have established 4 sites in Ventura and Santa Barbara counties.  in the meantime have gotten a Sustainable Agricultural Research and Extension  grant.  This grant does not start until October 2014.  We need bridging funds to continue this study.  Below is the original request from growers for funds.  If you would help contribute it will keep this study going until the larger grant comes through.  Thank you.

Dr. Gordon Frankie at UC Berkeley is teaming with Dr. Ben Faber from the Ventura County UCCE Extension to jointly work on a pollination study for avocados.  Dr. Frankie is studying how to increase native bee pollinators in avocado orchards.  To do this, we plan on surveying the native bees that are in the area, identify the plants that they are foraging on and then plant those species in orchards to lure indigenous bees + pollinators in to the orchards.  These plants will also be monitored for their attractiveness to beneficial insects which could control avocado thrips, persea mite along with other pests. We will need some startup money to cover the costs of native plants plus travel for Dr. Frankie and his assistant to be able to come down to monitor the project.  They are ready and willing to come do this important study.   We have applied for UC grants and will apply to CA Avocado Commission and CDFA Specialty Crops for money, but we will not see that money until summer 2014 at the earliest. We need your help.   It would help to plant the natives before the winter rains.  They need the rain to bloom; so the sooner you can help, the sooner we can plant.  We are trying to cobble together donations of about $3,000. Thank you in advance.  Any contributions are tax deductible and can be made to: UC Berkeley Foundation (with a notation at the bottom of the check: Gordon Frankie Bee Lab) and sent to Dept of Environmental Sciences, UC Berkeley, 130 Mulford Hall #3114, Berkeley, CA 94720.

Pollination ecologists have typically studied a focal plant species and one or a few closely related pollinator taxa, such as bumblebees, which fostered the view that plant-pollinator relationships are highly specialized. However recent community-scale studies have revealed that many pollination systems are generalized, such that plants are visited by diverse, and spatiotemporally variable, pollinator assemblages. My goal is to reconcile traditional views of "specialized" floral adaptation with ecological generalization. Specifically my lab will be incorporating aspects of pollinator foraging behavior and flower/pollinator phenotype, into the analysis of plant-pollinator communities using network techniques. To address this issue my lab is exploring several plant-pollinator systems, including sub-alpine meadows in Colorado and California, the Sonoran Desert of southern Arizona, as well as the coastal sage scrub community surrounding the CSUCI campus.

From an applied perspective my lab is also working to maintain honeybee populations for crop pollination. In the United States over 130 crops require insect pollination, with nearly one-third of our diet coming from honeybee pollination services. However, over the last several years large numbers of honeybee colonies have been lost to Colony Collapse Disorder. Working with beekeepers and growers, my lab is trying to assess the benefits of providing supplemental forage for colonies transported to California every winter to pollinate almonds. We are also available to assist Ventura County beekeepers in identifying Nosema microsporidian infections and to monitor parasitic mites.

In addition to working with honeybees my lab also studies the nesting and foraging behavior of native bees, including the Blue Orchard Bee, Osmia lignaria. By furthering our understanding of native bee biology we hope to increase their use as sustainable pollinators. In collaboration with the UC Cooperative Extensions, Ventura County, we will also be studying how native bees could be used to improve avocado pollination. 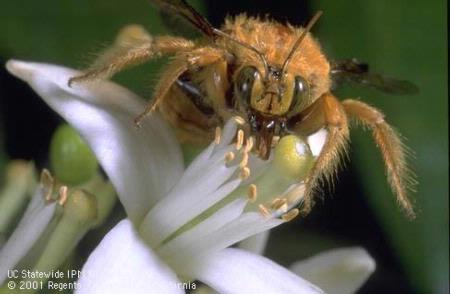 Dr. Gordon Frankie at UC Berkeley is teaming with me in Ventura County to jointly work on a pollination study for avocados.  Dr. Frankie is studying how to increase native bee pollinators in avocado orchards.  To do this, we plan on surveying the native bees that are in the area, identify the plants that they are foraging on and then plant those species in orchards to lure indigenous bees + pollinators in to the orchards.  These plants will also be monitored for their attractiveness to beneficial insects which could control avocado thrips, persea mite along with other pests.   We have applied for UC grants and will apply to CA Avocado Commission and CDFA Specialty Crops for money. We plan on planting the natives before the winter rains, if they ever come.

For a review of the native pollinators, check out the UC publication: How to attract and maintain pollinators in your garden.  http://anrcatalog.ucdavis.edu/pdf/8498.pdf