Caused by the bacterium Erwinia amylovora, fire blight is a common and frequently destructive disease of pome fruit trees and related plants.

Symptoms commonly appear in spring. The first sign is usually a watery, light tan ooze that leaks from cankers. After being exposed to the air, the ooze darkens and leaves streaking on branches or trunks. Other signs of infection are petal fall, flower stem wilt, and the blackening and shriveling of flowers, shoots, and/or young fruit.

As the disease progresses, the pathogen spreads into the wood. The infected wood tissue can become sunken and cracks often develop in the bark around the infected areas.

Ideal conditions for infection, disease development and spread of the pathogen are rainy or humid weather with daytime temperatures from 75 (degree sign) F to 85 (degree sign) F.

Home Gardeners can learn more about fire blight in UC IPM’s Pests in the Gardens and Landscapes: Fire Blight publication. Subjects include: identification and damage; life cycle; and management. Looking to add citrus trees to your home garden? UC ANR’s new downloadable publication Tried and True or Something New? Selected Citrus Varieties for the Home Gardner has many color photos and general information on a wide variety of citrus trees.

Further resources for selection and care of home garden citrus trees can be found at UC’s The California Backyard Orchard website. 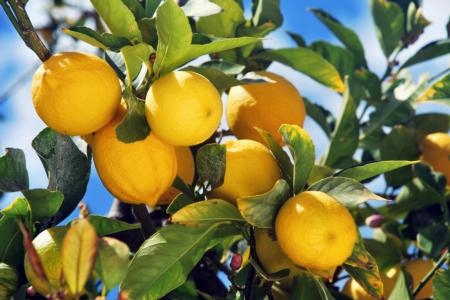 Do you know that California apple producers grow more varieties than any other state west of the Rocky Mountains? In addition to those grown in commercial orchards, apples can be grown at home in many areas of California.

UC ANR’s free publication, Apples: Safe methods to store, preserve, and enjoy provides practical information and advice to get the most out of this delicious and nutritious fruit. Dew point temperature:  the air temperature required for condensation (dew or frost) to occur.  This is an indication of the amount of humidity in the air.  The higher the dew point, the lower the rate of cooling.  As dew forms, the water releases heat (heat of condensation), and the temperature levels out.

"Temperature ceiling":  height to which heated air rises during orchard heating.  The lower the ceiling, the stronger the inversion and a greater amount of heat can be obtained from wind machines and orchard heating.

Radiation freeze (frost):  local cooling  due to rapid heat loss from plant and soil                surfaces under clear skies and light or no wind conditions.  Daytime temperatures are usually in the 45-55 degree range which causes the formation of a nighttime inversion.  Any significant breeze will cause temperatures to rise due to mixing of the inversion.

Advective freeze:  cooling of a wide area by dry polar air.  Typically the temperature is at or below 32 degrees for 2 or more days.  The temperature ceiling is high or non-existent.  This was what we got in December 1990. How Frosts and Freezes Occur

Before considering the methods of frost protection, one should understand the conditions under which low temperatures occur.  To differentiate between the two major sources of the cold, the terms local radiation frost and freeze are used.

Local radiation frosts are caused by a cooling of the objects on the earth's surface during the night.  This loss of heat from the foliage and soil is called radiation.  Heat accumulated from sunshine during the day is radiated to the sky during the night.  The cooled objects chill the surrounding air and usually the coldest zone is near the ground surface.  Air temperatures are warmer as one goes higher until a height is reached where they area art a maximum for that locations.  This is called the ceiling.  The temperature and height of the ceiling is different for each plane and situation.

When the ceiling is low, warm air is nearer the ground than when the ceiling is high/  This phenomenon, occurring frequently in Southern California, is called temperature inversion and accounts for this areas; ability to protect its orchards.

Colder air settles near the ground and then moves (flows) down the slope to still lower ground resulting in what is called the drift.

Terrain features and winds influence its direction and velocity.  A strong drift maintains air temperatures higher than those existing when little or no drift is present

The other type of freezing weather occurs when a large mass of cold air moves in from the north.  Fortunately, these freezes have not occurred frequently, about every 10 years.  Under freeze conditions, temperatures usually go below those experienced during local radiation frosts.  When this cold air moves in,  high ground is no warmer than lower ground and there is little or no ceiling.  Orchard protection at such times is difficult.

Three to four degrees F of higher temperatures can mean the difference between a bad burn and death of a tree.  The following practices can help protect your orchard from frost damage; they all have in common some method of retaining heat in the orchard.

During the day, an orchard soil acts as a reservoir for heat absorbed from the sun.  Some of this heat returns back into the atmosphere during the day and at night (reradiation), warming the orchard.  Moist soils will store more heat and are better heat conductors than dry ones, and a compacted soil - one that forms a firm surface - is a better conductor of heat than a soil that has been recently cultivated.  Therefore, when there is danger of frost, do not cultivate your orchard soil, but do keep it moist to a depth of at least one foot.

The insulating effect of weeds, sod and leaf litter between the rows reduces soil absorption of heat during the day and reduces reradiation.  In an experiment, an orchard that was weed-free with a compacted soil showed  3.8° F more warmth than an orchard with sod.  The same experiment demonstrated that an orchard with rain compacted soil was warmer than one that had been recently cultivated.  If you have a ground cover, mow as short as possible to minimize the insulating effect.

The size of the tree canopy in many ways determines the amount of reradiated heat that is captured by the trees.  A large, dense canopy can intercept more heat leaving the orchard than a small, sparse one.  A healthy tree has been shown to have a higher canopy temperature than a sparsely-foliated tree.  For example,  lemon trees with sieve-tube necrosis are frequently more frost-damaged than healthy ones, partly because of the sparseness of the foliage.  Proper pest and disease control, irrigation and fertilization are all important in maintaining a healthy tree more resistant to frost damage.

A most important factor in determining how damaging a frost may be is the time of year which it occurs - early or late winter.  If the frost comes early, before temperatures have a chance to drop gradually, trees have not had time to acclimate themselves, and the damage can be severe.  If, however the frost hits later in the season (after a period of gradual temperature decline), trees can develop a cold hardiness and better tolerate the cold weather.  To this end, late applications of nitrogen that cause excessive growth may delay this acclimation , thereby further reducing the tree's cold tolerance.

In most cases, frost protection can be improved by improving air drainage.  Brush, tall weeds and trees can impede the movement of cold air out of an orchard.  Remove these obstacles (or at least mow the weeds or prune up windbreaks), creating channels for air movement.

Irrigation water releases two types of heat when applied during a frosty night: the heat released by going from the water temperature at the nozzle down to 32° F (0° C), and another type called the heat of fusion, which is how most of the warming energy is released.  This is the energy that is obtained by water going from a liquid to a solid state.  For every degree of temperature drop (Celsius), there is one calorie of heat released  per gram of water.  A gram of water with a nozzle-exiting temperature of 65°F will release about 18 calories of heat when it cools to 32°F, but in changing from liquid to ice, 79 calories are released.  The more ice that is made, the more heat is released.  This heat helps raise the temperature of the orchard.

In furrow irrigation it is best to place the furrows as close to the dripline as possible and make the furrows as wide as possible to increase the transfer of heat into the air.  With sprinklers, the more output the better.  At Lake Alfred, Florida, the guidelines call  for at least 20 gph sprinklers, with lower rates giving less effect.  If you do not have the capacity to irrigate your entire orchard, it is advisable to choose one area and protect it, rather than stopping in the middle of the night to irrigate another area.  This is because the resultant evaporative cooling will take 607 calories per gram of water, and this heat loss comes at the expense of the leaf.  Therefore, an area where the water has been turned off prematurely will rapidly cool.

The rate of cooling is related to the dewpoint.  A high dewpoint indicates moist air, and a low dewpoint relatively dry air.  The drier the air, the more rapid the cooling.  When temperatures are low with extremely dry air conditions, irrigation can be a hazard to trees.  If the predicted dewpoint is well below (at least more than 5 °F) the predicted minimum temperature, sprinklers can cause excessive evaporative cooling.  With evaporative cooling, orchards with running water can actually be cooler than dry orchards.  Therefore, if trees are sprinkled and ice forms, in order to protect the trees, the sprinklers should continue in operation until the ice begins to melt.  To be certain, sprinklers can continue until the ice is completely melted.

Use of Wind Machines

In most situations, wind machines can be both effective and economical in providing protection;  however, in some situations, as we found in the advective freeze (cold polar winds) of 1990, they can exacerbate the situation.  The dry cold air drawn in by the machines will intensify the cold damage.

The number, power requirement and area protected vary with terrain and manufacturer's brand.  Generally 7 to 10 brake horsepower are required per acre, more in cold spots, less if there is a slope.  They should be started before temperatures drop below 35°F, since it is difficult for a wind machine to warm an orchard that has dropped below this critical temperature.

For some years, it has been known that bacteria residing on cold-sensitive plants initiate ice formation.  The ice formed in or on the plants spreads rapidly, causing mechanical injury.  Copper-containing sprays that are applied 10 days before cold weather, kill off these bacteria and allow enough time for their decomposition.   By controlling the ice-nucleating bacteria (INB), tests have shown temperatures may drop 2-4°F below critical levels without plants showing damage.