Boxelder bugs can be nuisance pests

The western boxelder bug (Boisea rubrolineata) usually feed on the leaves, flowers, and seedpods of the female or seedbearingbox elder tree and occasionally occur on mapleand ash trees. They sometimes feed on certain stone fruits and on grapes, where...

Have you seen large black or golden-brown bees foraging in your garden? These could be carpenter bees. Carpenter bees bore into lumber or trees to make nests for their brood and can damage structural wood or leave unsightly holes and stains. Multiple...

The Bagrada bug is a small, colorful stink bug that is becoming more common in California gardens and landscapes. First found in Los Angeles County in 2008, this new invasive pest has spread to all the southern California counties and has been moving... 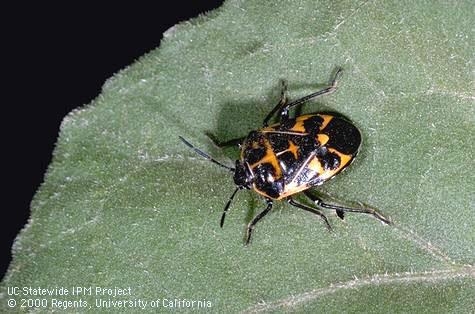 The harlequin bug, a common garden pest, is similarly colored but has different markings and is 3 times larger than Bagrada bug.

The harlequin bug, a common garden pest, is similarly colored but has different markings and is 3 times larger than Bagrada bug. Photo by Jack Kelly Clark. 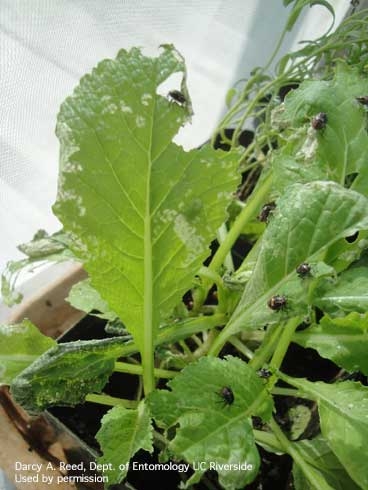 Bagrada bugs and their damage on mustard greens.

Elm leaf beetles frequently defoliated elm trees in landscapes, parks and along streets in the 1970s, 1980s and mid 1990s, eliminating shade and weakening these important components of California's urban forests. Fortunately, the elm leaf beetle has been... 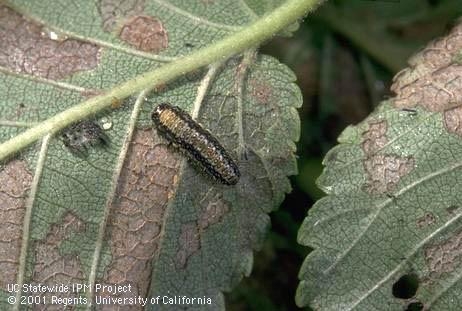 Finding out that your house is infested with subterranean termites is among many homeowners' greatest fears. Mud-covered shelter tubes in the basement or crawl space may be the first sign that homeowners observe; these tubes allow termites to travel from... 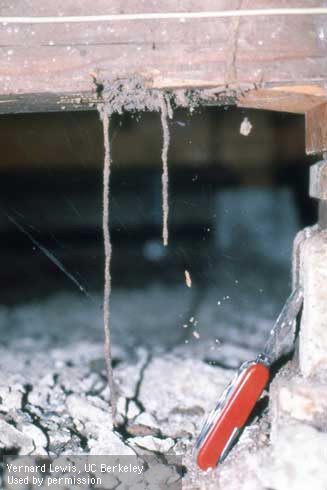 Drop tubes from wood to soil are a sign of a subterranean termite infestation.