Remnants of a burned trailer park in Paradise after the Camp Fire.

Shades of brown and grey cast over bricks, cement, remnants of metal roofs and steel beams from manufactured and modular homes, collapsed stucco walls, BBQs, shells of washers and driers, along with an occasional tea pot — that is what you can see in and amongst living, but singed Ponderosa pine and California black oak trees where the Camp Fire burned. How did California's most deadly fire happen and what might be done differently to ensure a better outcome? These are difficult questions that California will wrestle with for a long time to come. Surviving home with recently upgraded roofing, vents and combustible materials separated from the house. Every home surrounding this house was lost to the Camp Fire. A well-maintained forested area in Paradise that had minimal tree mortality from the Camp Fire.

Wildfire is not uniform

Not all fires are the same and not all houses experience the same type of fire. When you are looking at home losses and survivors, keep in mind that each home may not have had the same fire exposure. Some homes experienced significant ember exposure, while others ignited because their neighbor's home succumbed to fire and the heat of their neighbor's house caught their house on fire, while others were protected from the wind and its deadly embers. Paradise and Magalia have blocks and blocks of nothing but foundations, but amongst these bleak conditions are a few intact or partially damaged homes that have a story to tell. A homeowner holds a foundation vent found in the rubble of her home. Her house, built before the 2008 construction standards, had ¼-inch mesh screen that may have allowed embers to enter her home.
We saw homes that survived that had upgraded attic and foundation vents that meet the California building code for construction in wildfire prone areas. Some of these houses also included some extra efforts where vegetation and combustible mulch was virtually eliminated in the area immediately adjacent to the home. Our inspection team included UC's Dr. Steve Quarles, a national expert in fire-safe construction, who interpreted this to mean that meeting the 2008 Chapter 7 A standards, coupled with the enhanced defensible space, likely made the difference to ward off the assault of the ember-driven Camp Fire. We found evidence that burned homes in Paradise had ¼” mesh foundation and under-eave vent screens. Research has shown that these larger size screens let embers penetrate the attic and ignite the house from within. The 2008 California building code standards specify screen mesh size between 1/8” and 1/16”-inch, or vents that demonstrate their ability to resist embers and flames.

Our tour also confirmed that landscaping plants and wood mulch placed right next to the house creates vulnerability. While looking at the rubble of a home, it can be difficult to tell what happened; however, we saw several surviving houses with broken glass or otherwise damaged dual-pane windows that experienced heat exposures sufficient to crack glass in the windows, but the home still survived during these first two days when fire crews were rightly focused on community evacuation and not structure protection. For the houses that did not survive, we can interpret that in addition to the vulnerabilities in vents or a roof, heat can easily break glass in windows, especially if those windows are single pane, and can likely created a pathway for fire to enter the houses. This house met new construction standards. Several windows were broken from the heat of the fire. It likely would not have been damaged if there had been a 5-foot zone around the home that did not contain combustible plants or other materials.

A home at the top of a canyon or gulch can easily be overwhelmed by wildfire by taking on additional heat as the fire approaches and being blasted with embers. This is not a new concept, but the homes in the broader Paradise region were especially vulnerable when they were located above these gulches and canyons. Enhanced vegetation management is highly recommended that includes a 5-foot non-combustible zone immediately adjacent to the home. Charred remnants called “embers” found in a lawn were drivers of the Camp Fire. The large size suggests that these embers were generated from burning buildings, not from vegetation.
Our team, which also included Dr. Eric Knapp from the USDA Forest Service Pacific Southwest Research Station, has been able to do a quick analysis of home losses by year of construction in Paradise. This cursory analysis shows that many homes built after the 2008 wildfire standards were adopted were lost during this fire, however, without knowing the specific details of each home (e.g., maintenance practices, proximity to other building, etc.), these statistics can be misleading. We will continue to work through the available data to try to look for patterns, however, in the meantime, it seems clear to me that the new construction standards can reduce the probability of ember intrusion and may have helped for some homes in Paradise. This week a new study reported that complying with these standards was not considerably more expensive. Additionally, the codes that help guide construction in California's wildfire-prone areas are dynamic and will be informed by the 2017 and 2018 wildfire seasons.

For me, thinking about Paradise in the abstraction was easy. Visiting it was different. The name says it all. After my visit I could understand why someone would choose Paradise or Magalia; the views are awesome, the air is clear, the forest and woodlands are amazing. I can only imagine that the community was (almost) perfect. Rebuilding a more resilient community will take considerable thought, effort, and some radical new ideas. 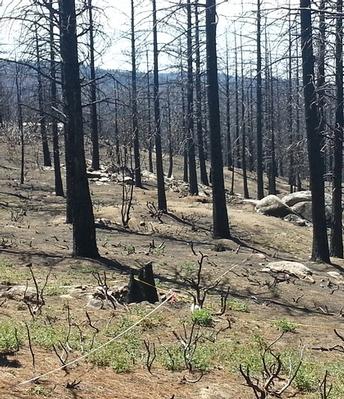