History of the Poinsettia

History of the Poinsettia

Now that we're in the midst of the holiday season you see poinsettia (Euphorbia pulcherrima) plants in many homes and businesses.  But how much do you know about the history of the poinsettia?  And have you wondered why it's associated with the holidays?

Native to Central America, the Aztecs called the plant “Cuetlaxochitl.”  They used the plant's latex as a fever treatment and made a dye from the plant's leaves.

The plant was named after Joel Roberts Poinsett (1779 – 1851), who was a doctor, amateur botanist, former member of Congress, and who served in a variety of government positions.  He helped found the National Institute for the Promotion of Science and the Useful Arts, which later became the Smithsonian Institution.  While he was the first American Ambassador to Mexico, he first encountered the red-leaved plants and was taken by its beauty.  So he sent plants home to his greenhouse and began propagating the plant in smaller sizes (it can grow naturally in Central America to small tree size) and sending it to botanic gardens.  Since Mr. Poinsett is credited with introducing the “Cuetlaxochitl” to the United States, the plant became known as the Poinsettia.

According to the legend, a poor Mexican girl didn't have a present to give to the Baby Jesus during Christmas Eve services.  As she walked to the chapel with her cousin, her cousin told her that any gift given by someone who loves him will make him happy.  She still had nothing to give him.  So along the road, she gathered a small bouquet of weeds to give him.   When she arrived at the chapel she placed the bouquet of weeds at the base of the nativity scene.  To everyone's surprise, the weeds suddenly turned into beautiful bright red flowers, i.e. poinsettias.

Poinsettias have become a very important floriculture crop in the United States.  In fact, December 12th is now celebrated as National Poinsettia Day.  So if you've purchased poinsettia plants for your home this holiday season, you're not alone! 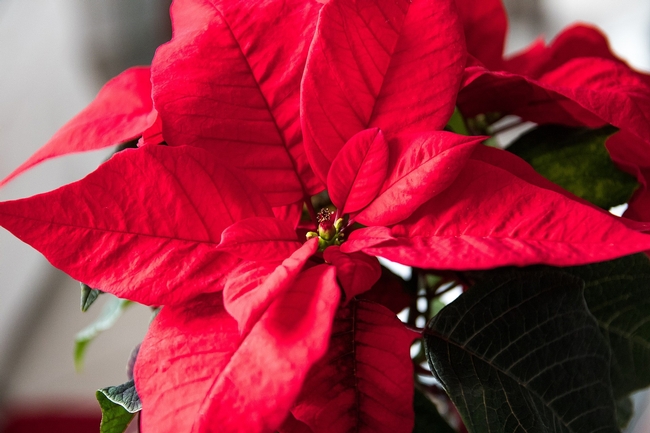