Robert E. Page Jr., as provost, Arizona State University. He received his doctorate in entomology from UC Davis and is a former chair of the UC Davis Department of Entomology.
It's a long-awaited book, 25 years in the making.

And it's sure to "bee" among the very best.

Eminent honey bee geneticist and biologist Robert E. Page Jr. has authored a 256-page book,  “The Art of the Bee: Shaping the Environment from Landscapes to Societies” (Oxford University Press), to be published Aug. 6.

Did you know that honey bees are both artists and engineers?

As environmental artists, they are "responsible for the brilliantly colored flowers in our landscapes," and as environmental engineers, they engineer “the niches of multitudes of plants, animals and microbes.”

The book "is a long time in the making,” said Page, who received his doctorate in entomology at UC Davis and served as a professor and chair of the Department of Entomology (now Entomology and Nematology) before heading to Arizona State University (ASU), where he advanced to school director, college dean and university provost.

“Twenty-five years ago, my friend and mentor Harry Laidlaw (for whom the UC Davis bee facility is named) wanted to write a honey bee biology textbook,” Page recalled. When they finished the outline, “it looked very much like the excellent book by Mark Winston The Biology of the Honey Bee, published in 1987 by Harvard University Press. I decided we didn't need another one, and we still don't.”

The book differs in that it's a collection of “sparkling essays” that “read like mystery stories,” said Rudiger Wehner, professor and director emeritus of the Institute of Zoology, University of Zürich. “With these lucidly written stories, Page takes us on a delightful journey through the many biological traits that on the whole constitute the honeybees' social contract.” Robert E. Page's new book, "The Art of the Bee: Shaping the Environment from Landscapes to Societies”
“But don't be fooled by the amiable and personal style—the book is comprehensive—from colony collapse disorder to colony-level evolution—and chock full of the latest results, presented with clarity and depth, leavened with razor-sharp insights into social evolution,” noted Gene Robinson, director, Carl R. Woese Institute for Genomic Biology and Department of Entomology, University of Illinois at Urbana-Champaign.

Page said his book is geared toward  “the person who has a basic knowledge of biology and a fascination with bees, perhaps an educated hobby beekeeper--there are a lot of them--or an undergraduate or graduate student with an interest.”

“Prior to the rise of flowering plants, the landscape was dull,” Page begins. “The first plants invaded land more than 450 million years ago. Species of ferns, horsetails, club mosses, and other “primitive,” non-seed-producing, non-flowering plants dominated. The earth was painted from a palette of green and brown. The first seed plants were gymnosperms, which originated around 100 million years later and eventually gave rise to the conifers that dominated the earth with massive forests. The first flowering plants, the angiosperms, appeared perhaps as early as 250 million years ago. The rise of flowering plants resulted in a burst of new plant species as they adapted to their insect pollinators, mostly beetles and short-tongued flies. Think of how the landscape changed. “

In addition to chapters on environmental artists and environmental engineering, Page includes  chapters on social contracts, superorganisms, reproductive competitions, and concludes with “The song of the queen.”

In the epilogue, Page ponders the complexity of individual bees and their colonies, comparing them to humans. “Members of complex societies live close together in closed nests, shared home sites, villages, etc., or in closely connected nomadic tribes. As groups, they typically have a set of tacit rules by which they live that involves working for the good of the group, systems of group and resource defense, internal mechanisms of policing cheaters that don't cooperate and live by the rules, a division of labor often associated with group defense and gathering and sharing resources, and usually asymmetries and rules associated with reproduction. These same general characteristics seem to apply broadly across eusocial insects (aphids, termites, bees, ants, and wasps), eusocial rodents (naked mole rats), higher apes, and humans. Why? The similarities are inescapable due to the nature of social contracts; they must have specific elements to protect the power and will of individuals, whether citizens of the United States of America or workers in a honey bee colony. The contract binds individuals to a society, but the specific social organization evolves by reverse engineering. Natural selection acts on the whole colony; social structure evolves to fit the needs of the group within a given environment. “ Harry Hyde Laidlaw Jr., known as "the father of honey bee genetics," tending his hives at UC Davis.
“Honey bees look like little people with frozen faces, staring at us from the entrance and top bars of a hive,” Page observes. “It's easy to believe that they, like us, plan their future, feel satisfaction in caring for the family, love their queen, hate their enemies, and have emotional highs and lows with good days and bad. To view them in that way has a term, anthropomorphic, or anthropocentric, meaning like us, or human-centered.”

Page points out that “Anthropocentric thinking can obscure the way we view nature and lead to false conclusions. Look at Aristotle and honey bee division of labor: For more than 2,000 years it was thought that the bees that work in the nest were postpubescent old men because they're hairy! In fact, the older bees forage and aren't hairy because the hairs break off as they age. I now see my work in a new light; we aren't so different, bees and humans. The elements of our social structures, and how they come about, have many similarities.” Former UC Davis graduate student Robert E. Page Jr., with his mentor Harry H. Laidlaw Jr.
UC Davis named him the 2019 distinguished emeritus professor. Nominator Steve Nadler, professor and chair of the UC Davis Department of Entomology and Nematology, praised Page as “a pioneer researcher in the field of behavioral genetics, an internationally recognized scholar, a highly respected author, a talented and innovative administrator, and a skilled teacher responsible for mentoring many of today's top bee scientists…he is arguably the most influential honey bee biologist of the past 30 years.”

Page, who received his doctorate in entomology from UC Davis in 1980, joined the UC Davis faculty in 1989 and left as emeritus chair of the Department of Entomology in 2004 when ASU recruited him for what would become a series of top-level administrative roles.  He advanced from director of the School of Life Sciences to dean of Life Sciences; vice provost and dean of the College of Liberal Arts and Sciences; and university provost. Today he holds the titles of provost emeritus of ASU and Regents professor emeritus, as well as UC Davis department chair emeritus, professor emeritus, and UC Davis distinguished emeritus professor.

Page is an elected member of the American Academy of Arts and Sciences, the Brazilian Academy of Science, Leopoldina (the German National Academic of Science), and the California Academy of Science. He is a recipient of the Alexander von Humboldt Senior Scientist Award (Humboldt Prize, 1995), the Carl Friedrich von Siemens Fellowship (2013), James W. Creasman Award of Excellence at ASU (2018). 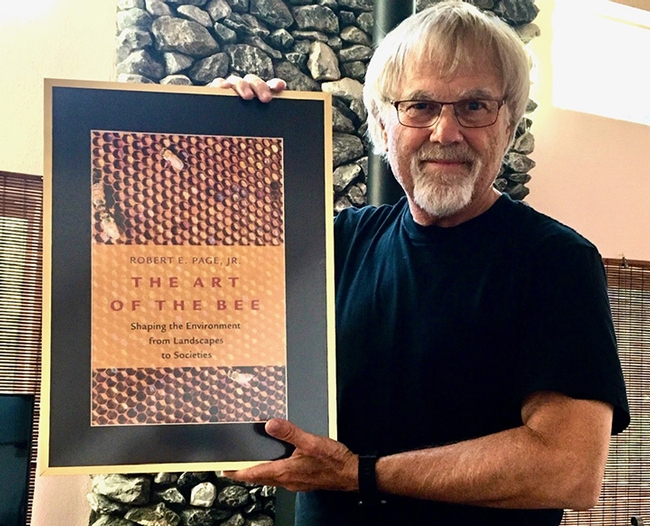 Eminent honey bee geneticist and biologist Robert E. Page Jr. with his new book, "The Art of the Bee." 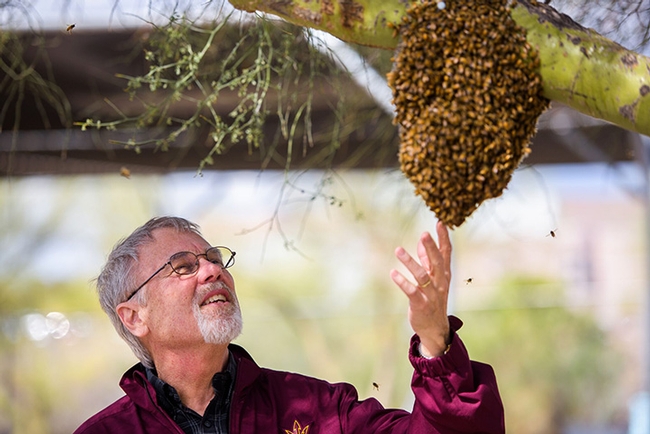 Robert E. Page Jr. examines a bee swarm. He is the author of a new book, "The Art of the Bee: Shaping the Environment from Landscapes to Societies."