If a Queen Bee Were to Celebrate Mother's Day...

If a queen bee were to celebrate Mother's Day (and she won't because she's too busy laying eggs), what a crowded festivity that would be.

On her maiden flight, the queen bee mates with some 12 to 25 drones in mid-air and then she heads back to the hive to lay eggs for the rest of her life, says Cobey, internationally renowned for her Carniolan bees and classes on instrumental insemination and bee breeding (stock improvement).

Yes, every bee in the hive has the same mother.  Not so with the fathers.

As Gary points out: "The queen bee has no control over the drones that inseminate her. (The virgin queen) mates while flying, never inside the hive."

It's a matriarchal society. The girls (worker bees) do all the work; they serve as nurse maids, nannies, royal attendants, builders, architects, foragers, dancers, honey tenders, pollen packers, propolis or "glue" specialists, air conditioning and heating technicians, guards, and undertakers. So their abbreviated life (during the summer the life span of a worker bee is only four to six weeks) is not surprising. The drones, or males, serve only a reproductive function. Once they they mate, they die.

Honey bee geneticist Robert E. Page Jr., distinguished emeritus professor of entomology at UC Davis (and emeritus provost, Arizona State University) studied with Laidlaw for his doctorate at UC Davis. He pays tribute to Laidlaw  in his book,  The Art of the Bee: Shaping the Environment from Landscapes to Societies.

In Chapter Nine, "The Song of the Queen," Page reprinted a poem by E. B. White (Dec. 15, The New Yorker) objecting to instrumental insemination. White opined in the poem that the queen bee should "mate with whatever drone" she encounters.

Her offspring slave throughout the day,
They feed her children as best they may
They would like to see a moment
Directed toward stock improvement.

If you're interested in bees and beekeeping, or just curious about these amazing superorganisms, these books read well on Mother's Day...and any other day. 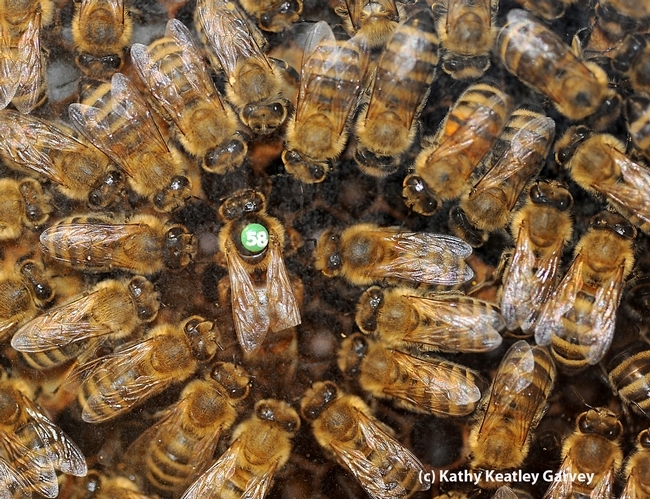 A queen bee (No. 58) and her retinue. This image is from Susan Cobey's colony.(Photo by Kathy Keatley Garvey) 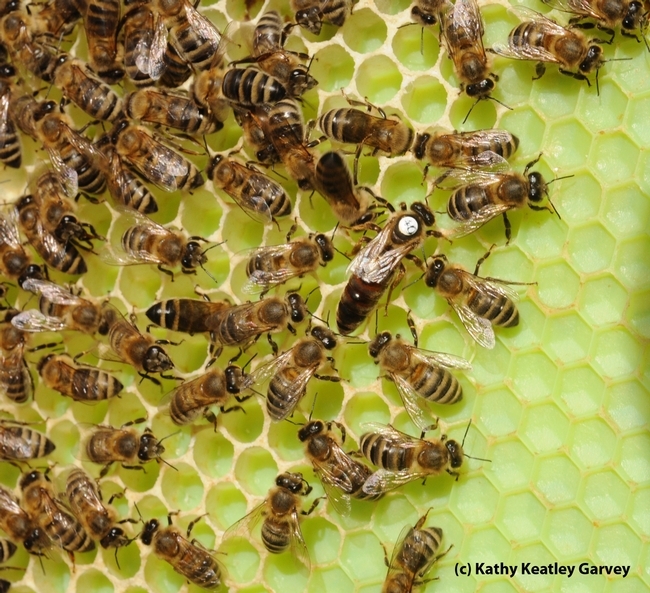 The queen bee is much larger than the worker bees. (Photo by Kathy Keatley Garvey)