A honey of an event

Honey, sometimes described as the soul of a field of flowers, seized the spotlight at a recent benefit in Sacramento for UC Davis honey bee research.

The occasion: The Bee Informed event.

The site: The historic ballroom of the Citizen Hotel, Sacramento.

“Honey is one of my favorite ingredients to use in desserts because of its beautifully nuanced flavors and gorgeous colors,” said Bee Informed coordinator Elaine Baker (top left) of the Citizen Hotel/Grange Restaurant. “It’s just magical.”

The event buzzed with bee and honey aficionados—and folks who just wanted to learn about bees and the products they produce. For the occasion, Baker created mini-desserts made with Sacramento-area honey. Guests sipped cocktails laced with honey and sampled a variety of honey provided by area beekeepers. Honey ranged from dark buckwheat to a light tupelo. Tupelo is a honey that doesn’t granulate.

Baker, who blogs about food, came up with the idea of a “Bee Informed” event to raise public awareness about the plight of the honey bees.

“The news media wrongfully reports that 33 percent to 35 percent of our nation’s honey bees are dying of CCD,” he said.

“Thirty-three to 35 percent is the average; only 25 percent of beekeepers have reported CCD in their colonies. Some lost 40, 80 or 100 percent of their hives due to CCD. So CCD is not killing 33 percent of our bees.”

CCD, the mysterious phenomenon characterized by adult bees abandoning the hive, may be due in part to an undiscovered microbe, but the malady “is going to be with us for awhile,” he said.

The Häagen-Dazs Honey Bee Haven, open to the public year around, is a half-acre bee friendly garden planted last fall next to the Laidlaw facility. It serves as a year-around food source for the Laidlaw bees and other pollinators; raises public awareness about the plight of bees; and provides educational opportunities for visitors, who can learn what to plant in their own yards to attract pollinations.

It is also a research garden; native pollinator specialist Robbin Thorp, emeritus professor of entomology, has found more than 50 species of bees, including leafcutter bees, metallic green sweat bees and bumble bees, at the site over the last two years.

Baker described the Bee Informed event as a great success. “Fantastic speakers, terrific vendors, delicious cocktails and desserts, not to mention all the beautiful honey.” A drawing for prizes included honey from Sacramento-area beekeepers and specially bottled honey made by UC Davis bees.

When asked to share one of her favorite honey recipes, she provided this one. Bon Appétit!

Set aside.  In a mixer with a paddle attachment combine:

Blend on low until combined. Add dry ingredients and blend on low speed just until combined. Put into a greased 9x5” loaf pan. Bake at 350F about 50-60 min. or until the bread tests done and is a deep golden brown color.  Remove from oven and let cool until barely warm, then remove from the pan. In a small saucepan heat up a small amount of the buckwheat honey with a little bit of water to make a glaze and brush on the top of the loaf.  Let cool completely. This bread is best served the same day.

If you don’t have a mixer this recipe can also be mixed by hand.  You can use any flavor of honey you like – wildflower, orange blossom, etc.  Elaine Baker likes buckwheat honey because of the assertive flavor and beautiful color. 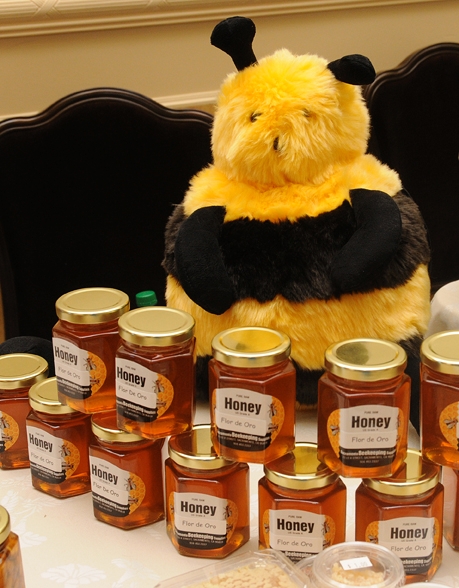 A BEE with jars of honey graced a table at the Bee Informed event. This display is the work of Nancy and Donna Stewart of Sacramento Beekeeping Supplies. (Photos by Kathy Keatley Garvey)
Posted on Monday, October 18, 2010 at 7:12 AM
Comments: 0
Tags: Elaine Baker (1), Eric Mussen (27), Häagen-Dazs Honey Bee Haven (4), Honey bees (18)