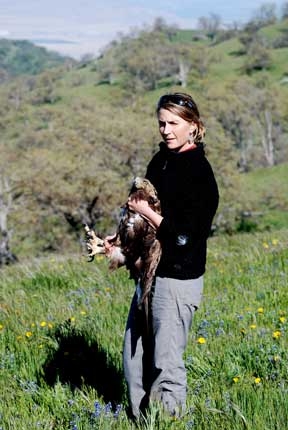 Oregonian blogger Carrie Sturrock called around the country on a quest for commentary about lead contamination in her own backyard. One of the sources she found was UC Cooperative Extension's Don Hodel of Los Angeles County.

Sturrock wrote that she lives in a house built in 1911, well before regulations banned lead in house paint. She deduced that lead sluffed, scraped or sanded from the siding may be in the soil, so she wanted to find out whether eating home-grown fruits and vegetables posed a health risk.

Soil testing revealed elevated levels of lead in her backyard soil. However, Hodel assured her, "Plants don't take it up that much. ... I really don't think it's a danger."

Another scientist had a different opinion. Wendy Heiger-Bernays, an associate professor of environmental health at Boston University School of Public Health, said that at 300 ppm or greater, leafy greens and herbs can take lead up in greater amounts.

Sturrock concluded that she won't quit gardening, but will take some precautions.

"I had thought about growing strawberries on the soil that's at 306 (ppm), but now I don't know -- maybe I'll try tomatoes, which are tall plants," she wrote. "As for the raspberry bushes, most everyone said I shouldn't worry about eating the fruit. Just wash it first."

A group of Latino high school students, working with Kathleen Nolan of UC Cooperative Extension in Monterey County, have created a new fotonovela to teach their peers about the hazards of lead poisoning. "Fotonovela" is comic-book-like literature popular in Mexico. In this instance, it is an educational pamphlet that features photos of the students with thought and speech bubbles telling a story.

According to a news article in the Salinas Californian yesterday, the students' fotonovela tells the story of six students who call themselves "lead detectives" to investigate what's wrong with the young neice of one of the characters.

"I'm so worried about my sobrina ~ she's almost 4 and should be talking by now," one fotonovela character says.

The project came about when Nolan asked Alisal High School Health Academy co-coordinator Nathan Voigtschild about assembling a group of students interested in making an educational booklet on lead.

"I asked a few of them and they were really into it," Voigtschild was quoted in the newspaper article. He added that he didn't offer any extra credit for participating in the project. "We wanted them to do it because they wanted to."

The Californian article, written by Kimber Solana, said 3,000 copies of the booklet will be printed - half of those in Spanish, half in English. "Get the Lead Out" and other educational fotonovelas produced by Monterey County high school students are published online in pdf format on the Monterey County UCCE Web site.

At their final meeting Tuesday, the students were honored for their achievement and surprised with $50 gift certificates, made possible by support from the Public Health Trust, Nolan said.

"One of the girls blushed and said, 'Now I can buy a graduation dress.'" Nolan said. Get the Lead Out fotonovela.