CalFresh at the UC's

CalFresh is a state funded program that provides benefits to low-income state residents in buying groceries every month. People that benefit from this program are eligible to receive up to $192 per month for groceries. There are efforts at UC Santa Cruz, as well as at other universities across the state, to utilize the program as a long-term solution for food insecurity experienced by students, in addition to short-term solutions such as food pantries.

Unfortunately, CalFresh is not as well known among the student population and there are students unaware that they are likely eligible for the program. Students that meet eligibility requirements such as, having work-study eligibility, Cal Grants A or B, have children, or are affiliated with EOP/EOPS or AB12/AB212 program will likely be approved for CalFresh.

In order to help alleviate food insecurity at the UCSC campus, there is a team of CalFresh Ambassadors, consisting of undergraduate students, who are working towards spreading awareness of the program and directly assisting students during the application process. There are currently bimonthly CalFresh informational sessions being held on campus for students, as well as individual appointments with a CalFresh Ambassador that can be scheduled by contacting calfresh@ucsc.edu or deanofstudents@ucsc.edu. Alternatively, students can apply directly at students.getcalfresh.org and visit our Facebook page, UCSC Food for All, to stay up to date on upcoming events.

To learn more about CalFresh resources on your campus:

In this post James Lande, a UC Santa Cruz undergraduate and Produce Pop-up coordinator, gives us the inside scoop on an exciting student-led initiative: The Food Systems Working Group (FSWG), anchored within the Center for Agroecology and Sustainable Food Systems (CASFS) provides a space for the student run Produce Pop-Up project at UCSC. The Produce Pop-Up began as a senior project in the Fall of 2015 and has been sustained through FSWG members ever since. In efforts to improve issues of food access and healthy food purchasing on campus, the Produce Pop-Up provides a space for students to purchase affordable produce sourced from the CASFS Farm and local Santa Cruz farmers' markets. By partnering with the CASFS farm and farmers' markets the Pop-Up is establishing a connection with local farmers and UCSC student organizations.

Once a week the Produce Pop-Up team sells produce in the quarry plaza so that students who do not have the ability or time to purchase their food off-campus can still access healthy and fresh food. The Pop-Up tent is set up in a central location on campus so that it is easily accessible. In this way the Pop-Up serves as an important connector between the CASFS Farm and students by being in a visible, central student space. Students and staff can either stop by and have a snack on their way to class or do their grocery shopping for the week on their way home. One of the main challenges that arises in providing fresh produce is that students are unfamiliar with how to cook some items or do not have access to a kitchen. In effort to make it easier for students to prepare their own meals, we offer tips on how they can cook quick meals or make raw meals that do not require cooking. We also offer ready made nutritious meals from the former UCSC Dining Chef and Santa Cruz City Schools Nutrition Director Jamie Smith, through his business, Food Smith. Organic produce and prepared meals for sale at affordable prices ($3/$4)
If anyone needs a quick lunch and does not have the time to cook. The meals are organic and sourced from local farms featuring a “paleo” style diet approach. In addition to making fresh produce more accessible, we aim to make it more affordable as well. Most of the food purchased from the Farmers' Market is bought in bulk so that it can be sold at a lower price at the Pop-Up. We also accept EBT and provide informational flyers to inform students of the Calfresh program and where they can find more information on campus. The produce that is not sold is transferred to the food pantry in the dean of students office to divert healthy fresh product and prevent any food from being wasted. At present, our model has also inspired UC Berkeley and UC Santa Barbara to reach out to their regional organic growers and make locally produced food more accessible to their campus communities.
Focus Areas:
Focus Area Tags: Food, Health
Comments: 0
Reexamining the Definition of Sustainability

When I hear the word “environmentalism,” I think of the mainstream (white, male-dominated) narrative that is associated with visiting National Parks and “the great outdoors,” and signing the World Wildlife Fund's petitions to save rare species on the planet. Images from an REI commercial come to my mind, and eloquent John Muir quotes fill my ears. At the same time, I can't help but think about the fact that John Muir was actually a racist (1), and that the conservation-centered environmentalism narrative ignores the deliberate poisoning of low-income, minority communities by nearby fuel companies and other industrial facilities. I also know that the trendy thrift-shopping and mason-jar-carrying movement of sustainability today largely ignores the lifestyle that marginalized people and people of color have been practicing out of necessity for generations. The now-trendy process of fermentation to make things like craft beer and kombucha has actually been in use by humans for thousands of years (anaerobic oxidation actually predates human existence) (2). But it also has a powerful cultural significance in the culinary traditions of indigenous populations around the world, which are frequently left unacknowledged by these fashionable foodie trends.

Fortunately, we've come a long way since the Sierra Club's founding in 1892. In 2015, the Sierra Club's national board of directors voted to rename the Le Conte Memorial Lodge in Yosemite after the recent discovery and subsequent public outcry that Joseph Le Conte, a founding member of the Club, was actually a loud and proud white supremacist (3). In addition, the organization now has numerous justice-centered programs that include environmental justice, equity and inclusion, gender equity, labor and economic justice, as well as responsible trade. However, these waves of change within the mainstream environmental narrative did not just show up with the changing times; they were undoubtedly made possible by the work that grassroots organizers, womxn, and people of color have done to bring attention to the pervasive issues of environmental injustice and racism in this country.

At the level of the University of California, we've gradually come to address the need for representation and perspectives of people of color within the environmental narrative. There are ethnic studies departments, and classes offered that address environmental racism—but this curriculum is not ubiquitous, nor is it enough to address pervasive systematic inequalities of environmental injustice.

Furthermore, UCLA does not have a student space dedicated to environmentalists of color. Through my research and network as a Carbon Neutrality Initiative Fellow, I have learned about the accomplishments of students at schools such as UC Santa Cruz and UC Berkeley that now have well-established organizations on campus dedicated to providing space for students of color to engage in conversations about environmental racism, justice, and reexamining the definition of sustainability.

I was motivated by the work being done on other campuses, and by the rich conversations I have had with UCLA peers and CNI/GFI colleagues about this issue, so I set out to create something along this thread at UCLA. Given my position as a student engagement fellow for the UC-wide Carbon Neutrality Initiative, I wanted to use my resources to re-center and reframe the conversation around sustainability within UCLA's campus community and create a platform for environmental advocacy that doesn't revolve around trendy “green” practices.

It's now nearing the end of Winter quarter, and I am thrilled to say that I have gathered an incredible group of like-minded students over the past quarter or so that is coming together as the UCLA Environmentalists of Color Collective. Our joint mission is to promote and co-create a space for marginalized identities to unpack, discuss, and organize for diversity and inclusivity within the mainstream environmentalism movement. We are currently organizing a Climate Justice Forum, open to the entire Los Angeles community, that will be held at the end of April this year. By hosting a Climate Justice Forum, the UCLA Environmentalists of Color Collective hopes to accomplish three things:

We are also creating a short documentary that will highlight the ways in which different communities practice and define environmental sustainability. The filmed interviews will be released as a short video series of “teaser trailers” for our upcoming Climate Justice Forum focused on amplifying the environmental narratives of BIPOC (black, indigenous, people of color) identities. Behind the scenes: filming for the video series.

From these efforts, I hope to inspire UCLA students to form a more permanent conversation on campus surrounding these issues—be it an annual climate justice forum, a student collective, a campus resource center, or in our daily conversations and class curriculum. Our UC-wide journey to carbon neutrality must encompass the efforts and narratives of diverse communities so that we can ensure a more inclusive sustainability movement for all.

The author would like to graciously thank Valeree Catangay, UCLA CNI Fellow, for her comments, suggestions, and edits to this post. I couldn't have done it without you!

Over the summer of 2017, a collaboration between SunPower and UC Riverside resulted in 9,600 new solar panels to cover the largest parking lots on campus. With the installation of these solar panels, UCR is now creating more on-site renewable energy than any other UC campus, except for UC Davis. 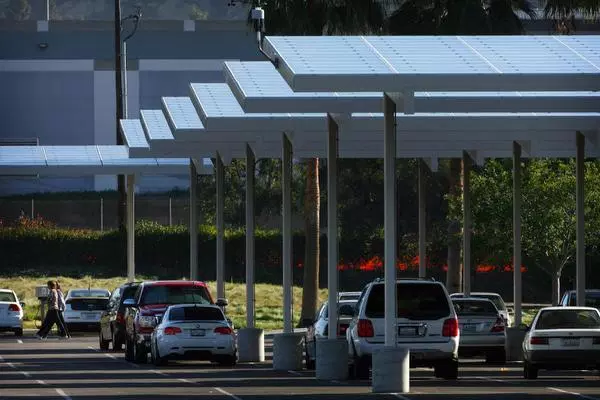 To highlight this achievement, Ben Sommerkorn and Ella Deyett of the UCR Graduate Sustainability Network worked with UCR's Center for Environmental Research and Technology (CE-CERT) and School of Public Policy to hold a public panel about our campus renewable energy portfolio.  The panel featured Sean Mantucca from SunPower Corporation, Jeff Kaplan from UCR Capital Asset Strategies, and Dr. Sadrul Ula, UCR Director of Infrastructure and Energy management.  The hour-long event informed the audience of the future prospects for UCR renewable energy and the upcoming projects that aim to lower our carbon footprint. This event drew a substantial crowd of students, staff, faculty and even members of the Riverside community.

Many of UCR's sustainability initiatives are done behind the scenes, and the public (both on and off campus) is often unaware of these efforts. As a CNI fellow, it is my goal to bridge this information gap in hopes of creating a more visible culture of sustainability and carbon neutrality at UCR. The next lecture series will be held on April 19, and will feature Sustainable Agriculture with professional panelist from UCR faculty, graduate researchers, and industry personnel. 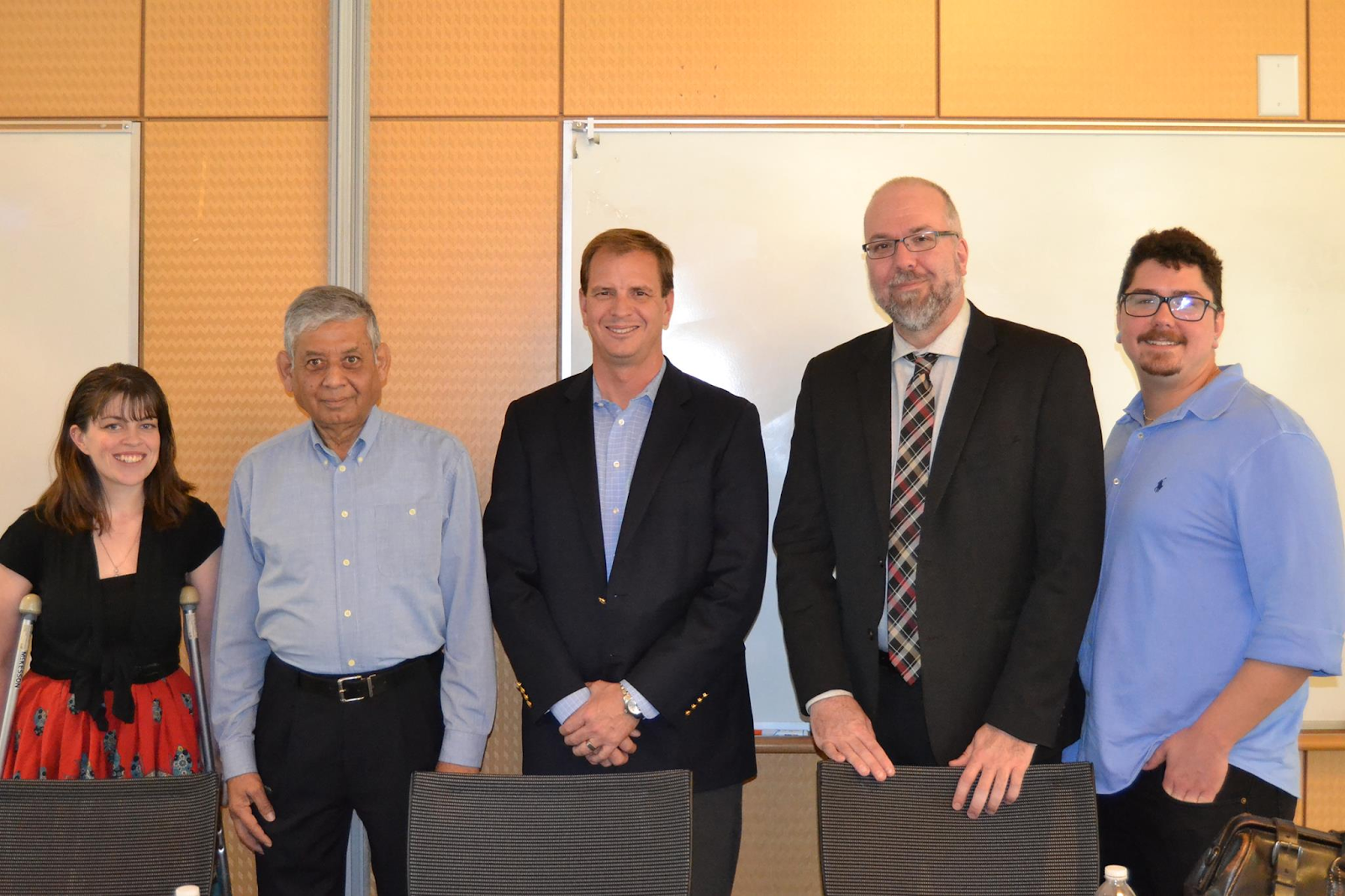 Comments: 0
Impact of Food Insecurity on the Health of Women Living with HIV
Published on: February 12, 2018

As HIV treatment has advanced, more and more attention has focused on what has been termed the “HIV care cascade,” depicted in the bar graph below [10].