Every 65 Seconds, Someone Develops Alzheimer’s Disease.
Published on: July 31, 2018

More than 5.7 million Americans live with Alzheimer's disease, a number expected to rise to 14 million by 2050, according to a March 2018 report by the Alzheimer's Association.

There is one new Alzheimer's case every 65 seconds.

Preventing Alzheimer's is critical as the young Latino population ages.

“The number of Hispanic elders with Alzheimer's and related dementia could increase... 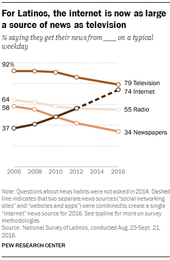 Latinos and the internet

On a typical weekday, three-quarters of U.S. Latinos get their news from internet sources, nearly equal to the share who do so from television, according to a 2016 survey of Latino adults by Pew Research Center.

For years, TV was the most commonly used platform for news among U.S. Hispanics. In recent years, however, the share getting their news from TV has declined, from 92% in 2006 to 79% in 2016. Meanwhile, 74% of Hispanics said in 2016 that they used the internet – including social media or smartphone apps – as a source of news on a typical weekday, up from 37% in 2006.

Hispanics also consume news from radio and newspapers, but neither is as widely used as TV or the internet. In 2016, 55% of Hispanics got...

Here's a look at the Hispanic population in the United States.

Facts: The Census Bureau describes Hispanic or Latino ethnicity as "a person of Cuban, Mexican, Puerto Rican, South or Central American, or other Spanish culture or origin regardless of race."

By 2060, the Census Bureau projects that Hispanic people will comprise over 28% of the total population with 119 million residing in the United States.

There are an estimated 55 million Hispanic people in the United...

"The Complex and Varied Households of Low-Income Hispanic Children," a study published by Child Trends and the National Research Center on Hispanic Children & Families, showcases the challenges, advantages and unique characteristics of diverse low-income Hispanic homes in the U.S., and its effect on children.

People of Hispanic and Latino origin are at high risk for developing type 2 diabetes and related cardio metabolic abnormalities, but the risk varies considerably among specific ethnic groups and other factors, such as the length of time they have been living in the United States, according to two studies and an accompanying commentary being published in the August issue of Diabetes Care®.

Researchers have long known that people of Hispanic/Latino background are at higher risk for type 2 diabetes than non-Hispanic Caucasians. However, most research has looked at this group as a whole, rather...