Join us for our next webinar on Wednesday, June 17th at 1pm PDT, which will feature Dr. Tina Saitone, CE Specialist in Agricultural and Resource Economics,  presenting "Can you Insure Against Drought? Information and Outcomes from the Pasture, Rangeland, and Forage Insurance Program".

Working Rangelands Wednesdays is a bi-weekly webinar series where we explore topics around rangeland agriculture in California and across the West. 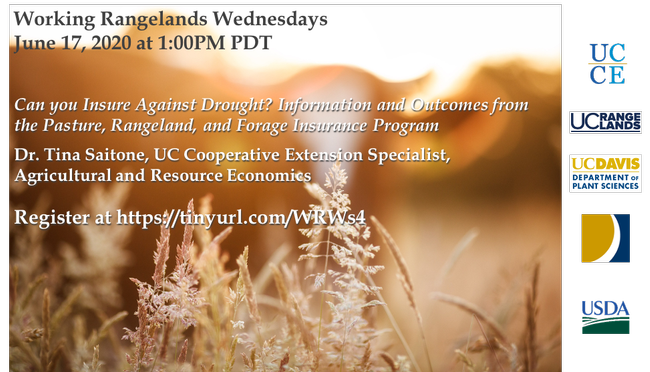 Announcement reprinted from California Wool Growers' Association newsletter. I was part of the team and it reflects input from Mendocino and Lake County ranchers as well as the rest of the state.

California has experienced five large-scale, multiyear droughts since 1960; however, the current event is considered the state's most severe drought in at least 500 years. Each year of the current drought has presented different challenges; for example, much of California received no measurable precipitation December 2013 through late January 2014. In the following year, the Sierra Nevada snowpack was just 5% of normal. As California ranching is largely dependent on rain-fed systems, as opposed to groundwater or stored water, it is very vulnerable to drought. In fact, rangeland livestock ranchers were among the first affected by the abnormally warm, dry winters at the beginning of the current multiyear drought.

In this article, we highlight lessons learned so far from past droughts, as well as California's unprecedented and ongoing multiyear drought. We draw on ranchers' perspectives and experiences, including research results from a statewide mail survey of 507 ranchers and semistructured interviews of 102 ranchers, as well as our own experiences. The mail survey (the California Rangeland Decision-Making Survey) included questions on operator and operation demographics, goals and practices, information resources, and rancher perspectives. Semistructured interviews are part of a larger ongoing project (the California Ranch Stewardship Project) examining rangeland management for multiple ecosystem services.

The publication is available at the following link - http://www.sciencedirect.com/science/article/pii/S019005281630027X