A Thriving Vegetable Garden with Less Water
Published on: September 17, 2015 The Food Gardening Specialists (FGS) of the UCCE Sonoma Master Gardeners are excited to present water-wise food gardening strategies.Given our hot, dry summers along with the prediction of extended drought, we can't afford to waste a drop.

This video demonstrates how home and community gardeners can grow a thriving vegetable garden with less water. In addition, this video is complemented by a planting scheme and a drip system instruction and shopping list that reflects the 4x8-foot demonstration vegetable bed in the video.

For people wondering if they can have a food garden with limited available water, the Food Gardening Specialists (FGS) of the UCCE Sonoma Master Gardeners believe that the answer is, “Yes!”  All you need to do is to scale planting to your family's likes and needs and to apply water-wise strategies to your vegetable garden.  The video, along with helpful water-wise publications, is available for viewing on the SCMG website: Food Gardening with Less Water.

You CAN have a bountiful, water-wise vegetable garden in a drought! The garden is located in the outdoor patio at Hall of Flowers. Master Gardener docents will be available on-site from 11 a.m. until 6 p.m. Sonoma County Fair runs July 24 through August 9, closed Mondays.

Here are pictures of this year's demo garden. 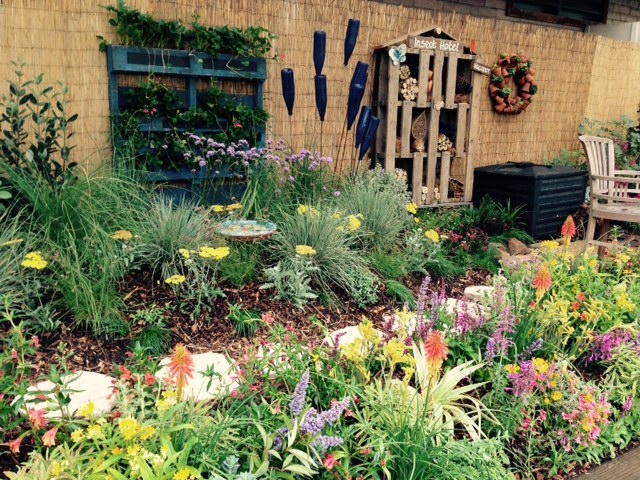 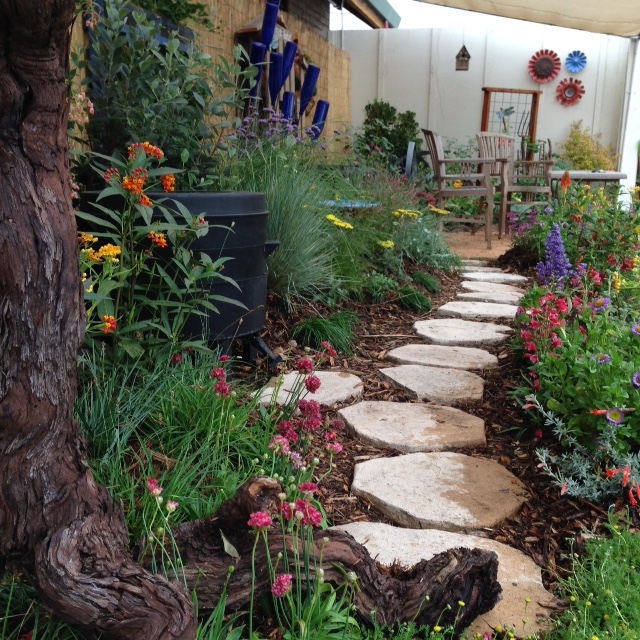 The University of California Cooperative Extension Sonoma County Master Gardeners (SCMG) are very proud to announce that our Garden Sense project received first place in the Community Service category in the Search for Excellence (SFE) recognition program of Extension Master Gardener (EMG) volunteer work throughout the United States, Canada and South Korea.  All SFE applications must show that significant learning took place, whether by the EMG or the general public with whom they were involved. All volunteer projects done by EMGs are significant to their communities, but not all are SFE projects.

The SFE is designed to recognize outstanding group projects, not an individual who does outstanding work.  The International Master Gardener recognition is a SEARCH FOR EXCELLENCE of the highest quality within Master Gardener programs across the United States and Canada.  Only projects that improve people's lives are awarded.

SCMG has been focusing on the sustainable gardening practice of water conservation via the Garden Sense program, a partnership developed between SCMG and the Sonoma County Water Agency (SCWA) in fall 2013.  Most home landscapes in this region have been created without any regard to our summer-dry climate, and the public is not at all aware of the water needs of commonly used landscape plants. A team of two of our volunteer consultants will visit a Sonoma County homeowner's garden to show how to conserve water by creating a climate-appropriate garden that is healthy, sustainable and environmentally sound.  The program is offered countywide to municipal water users and well users.

In our first year of operation we estimate
water savings as a result of the program at 6 acre feet.

Rains from early December in California, which some are describing as falling in "biblical" proportions, will bring welcome relief from the historic drought, reported the Olive Oil Times.

"The storm will partially replenish water supplies, but there is still a long way to go," commented Dan Flynn of the UC Davis Olive Center. "Part of that stress influenced the crop load, which was lower than normal, and it also advanced the ripening of fruit," Vossen said. "This autumn harvest was at least two to three weeks early and was finished by Thanksgiving."

“The rainfall we are receiving right now is welcome for refilling the soil profiles, so that the olive trees can start off next spring with good growth,” Vossen said. “It is also a relief to see enough rain to start to see a replenishment of our reservoirs, so that irrigation water will once again be plentiful for next summer's needs. Even though we may get some temporary flooding, all in all, this rainfall is a welcome thing.”

The UCCE Sonoma Master Gardeners launched a partnership with the Sonoma County Water Agency in November 2013 called “”. Under the Garden Sense program, a team of two Master Gardeners with specialized training in water efficiency schedule visits with interested Sonoma County homeowners to advise on how to transform their landscape from one that gulps water to one that sips. As a result of the drought emergency, there has been a huge response to the program. Garden Sense teams visited 161 clients in 2014 with a total of 182 total clients visited since the program inception in November 2013. There is a backlog of 90 more clients waiting for appointments, and we are training a new group of Garden Sense consultants to help meet the demand generated by the program.

There are a wide range of planned activities by the clients with whom we have consulted ranging from a complete re-landscape of yards with new irrigation, water-wise plants and mulching to simple irrigation improvements.

There has been a very positive response to the program, and homeowners seem genuinely grateful for assistance with recommendations in their specific home landscape. The UCCE Sonoma Master Gardeners will be conducting a survey later this year to assess actual impact of changes homeowners have made in landscape water use practices as a results of the Garden Sense program. Contact the Master Gardeners at 707-565-2608 or visit Garden Sense