WED, APR 14 2021
0:29:02
Customer Engagement: U-Pick Membership Programs
Published on: July 27, 2016
For a small-scale farm, opening up the fields and orchards to the public and allowing them to pick their own crops can be a wonderful way to engage happy customers and teach children where their food comes from. It can also mean opening the family farm to people who trample vegetable beds, let their children break apple tree branches, and "sample" more than they buy. Two California farms, Suzie's Farm in San Diego and Gabriel Farm in Sonoma County, have set up U-Pick membership programs that allow them to invite U-Pickers while controlling potential damage and limiting overcrowding. Nigel and Lorraine of Eatwell Farm in Dixon go an extra mile to share a taste of real farm experiences with their 500 CSA members and their friends and relations, partly for increased understanding about the farm by their customers and partly to build loyalty and attract new CSA members. Eatwell Farm is a certified organic, diversified farm of about 100 acres, selling at farmers' markets, through a CSA and to wholesale customers. My wife and I were lucky enough to join the Garlic Braiding Party at Eatwell last Saturday with a small crowd of delighted CSA members and their friends, mostly families with children. For only a fifteen dollar ticket price, we were invited to set up tents to stay overnight, tour the farm, join a potluck dinner, roast marshmallows at the campfire, enjoy coffee and breakfast in the morning, and just relax on the farm. And we learned how to harvest and braid garlic! And we got to keep the garlic! And we got to bring home some strawberries!

After arriving and getting settled, we all walked out to the garlic field, where we learned how to pull up the bulbs with the stem still attached. We got the hang of garlic harvesting quickly, as the soil had already been loosened around the bulbs, making pulling pretty easy. We picked and pulled and shook off the dirt and piled our findings into harvesting trays to bring back to the packing shed.

After we'd filled a dozen or so trays with our harvest, Connie and Eric, our hosts for the afternoon, let us loose in the next field over, the most beautiful abundant strawberry patch, with instructions to taste and pick what we wanted. No prices, no weighing, just picking and eating of the most delicious ripe and sweet berries. Smiles were everywhere. On the short walk back to the packing shed we wandered out to visit some of the hundreds of chickens housed in movable coops around the farm, passed through a field of fragrant lavender and couldn't resist a taste of a sweet berry or two (or three) from the mulberry tree.

Then it was time to learn how to braid. First a little instruction in cleaning off the outer layers of skins, then a short demo on how to braid, and we were ready. We all made a few braids, or tried to make braids. Although the farm sells garlic at their farmers' markets, Connie and Eric again let us know that we could take home as much as we wanted! We felt royally gifted with kindness.

Finally, dinner was ready. The main course was farm-raised chicken, prepared by Lorraine. Rounding out the delicious meal were potluck salads, sides and sweets brought by the visitors. Dinner was followed by a campfire, complete with marshmallows and all the makings for classic s'mores. We didn't stay overnight, as we only live twenty miles down the road, but we left our new friends to enjoy a Solstice evening on the farm, a night under the stars, and a good rooster wake-up in the morning. Thank you, Nigel, Lorraine, Connie and Eric, for a memorable experience! We'll tell everyone we can about your CSA and hope to come back to make tomato sauce in August. 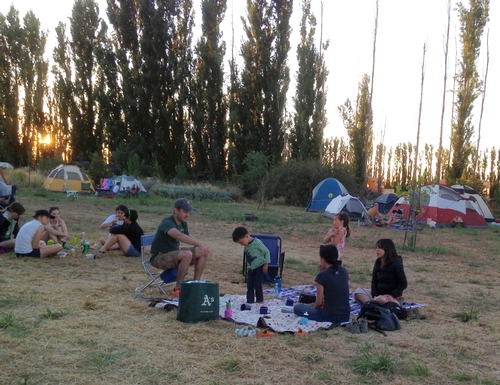