Bug Squad
sitenum=63
Happenings in the insect world
Hop to It!

What's that hopping on our patio?

At first we thought it was a grasshopper. Not!

"Katydids have long, threadlike antennae," said Kimsey. "Grasshopper antennae are rarely much longer than the head."

Said Thorp: "Note the long slender antennae (as long as or longer than the body); the very long slender jumping hind legs; and the scimitar-like ovipositor at the end of the abdomen."

Scientists tell us that the number of described species in the family Tettigoniidae exceeds 6400. Most katydids are green. They're often perfectly camouflaged in bushes and trees.

A katydid. The name is derived from the "song" it sings by rubbing its wings together. "Katy did." "Katy didn't."

This katydid, a female, responded to our footsteps. (Their "ears" or hearing organs are on their front feet.)

It hopped away, but not before we captured its image. 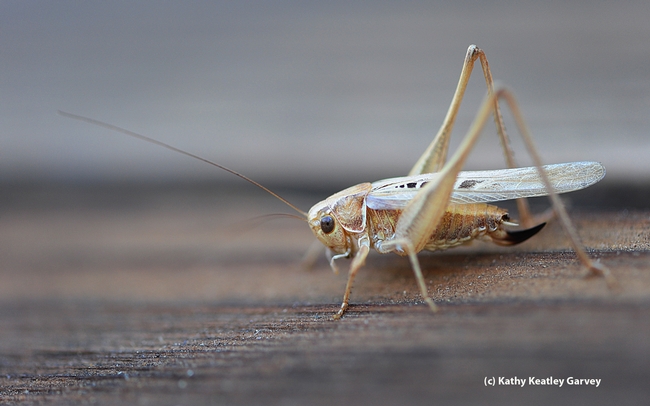