Sometimes foraging honey bees are covered with their own kind of gold--pollen--or protein for their colonies.

We saw this honey bee dusted with gold from head to thorax to abdomen as she gathered pollen from blanket flowers (Gaillardia). Her flight plan seemed uncertain, as her load was heavy and her visibility, poor. She struggled to take off, but take off she did.

Back then, the hills were covered with wildflowers where bees gathered nectar (carbohydrates) and pollen (protein). Today, however, scientists are worried about bee  malnutrition.

"Honey bee colonies need a mix of pollens every day to meet their nutritional needs," says Extension apiculturist Eric Mussen of the UC Davis Department of Entomology and Nematology. "In fact, they should have a one-acre equivalent of blossoms available to them daily to meet their demands.  They can fly up to four miles from the hive--a 50-square mile area--to gather that food and water (and propolis, plant resin)."

A worried beekeeper recently asked him about the declining bee population and wondered why his own colonies were dwindling.  In addition to malnutrition, Mussen listed a few other possibilities:

Varroa mites – "They suck the blood from developing pupae and adult bees, shortening their lifespans.  They vector virus diseases, the easiest to see being deformed wing virus.  If you have adult bees around the colony with curly, undeveloped wings, then you have too many mites.  If you see mites on the bees when you look in the hive, that is too many mites."

Nosema ceranae and other diseases – "You need a microscope to see the spores of a Nosema infection.  Go to Randy Oliver’s webpage, Scientificbeekeeping.com, and look at the information on Nosema ceranae and spore counting."

Contact with toxic chemicals – "Since your bees can fly up to four miles away to forage, that also is the distance within which they can get into trouble with bee-toxic chemicals.  It is not likely that the organic farm is a source.  However, if there are other farms around, or if your neighbors (golf courses, shopping centers, parks, playgrounds, etc.) are having problems with sucking or chewing insects, they may have used one of the neonicotinoids on their shrubs or trees.  Turf and ornamental dosages are considerably higher than those used in commercial agriculture.  So, the amounts of toxins in nectar and pollens can be toxic to honey bees and other pollinators."

Mussen also acknowledged that California buckeye blossoms are toxic to bees. "This was a fairly dry spring," he said. "Not too many weeds and wildflowers were around when the California buckeye came into bloom.  Buckeye pollen is toxic to developing bee brood and to adult bees, if it gets to be their primary food source in the colony."

The problem could also be due to other issues as well, Mussen said.  "Maybe the queens did not mate with enough drones, or the queens got too hot or too cold during their journeys to your hives, etc."

"As beekeepers, it is up to you to stick your nose in the hive, look at everything and try to determine what may be going wrong.  If you are feeling way too new at this to have any idea of what is going on, then contact your local bee club--there is one in practically half of the California counties--and find someone to help access your problems."

And the pollen, that precious protein? "When beekeepers examine their hives, they should see a good supply of pollen with many colors," Mussen says. 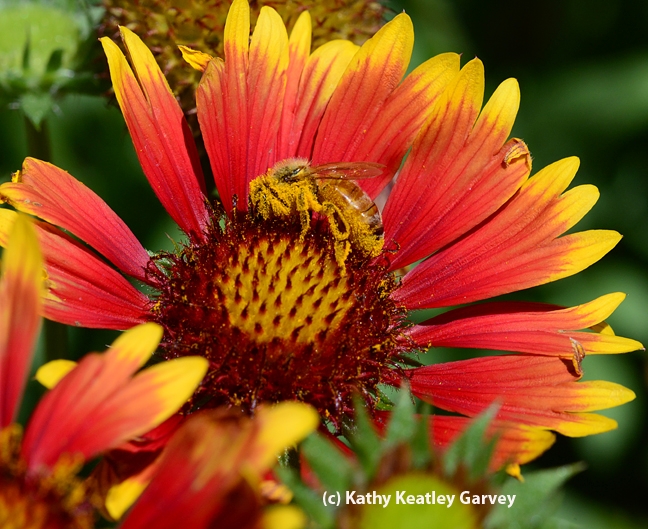 Honey bee is covered with pollen from a blanket flower, Gaillardia. (Photo by Kathy Keatley Garvey) 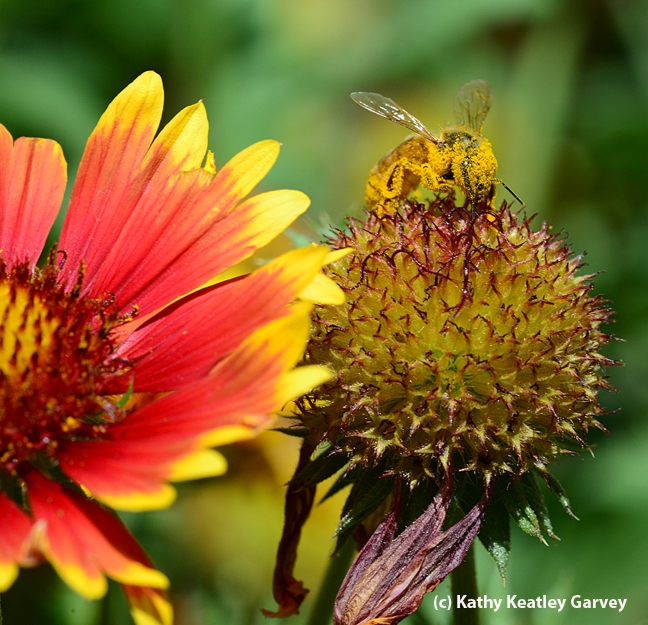 Honey bee is dusted with pollen from the blanket flower. (Photo by Kathy Keatley Garvey) 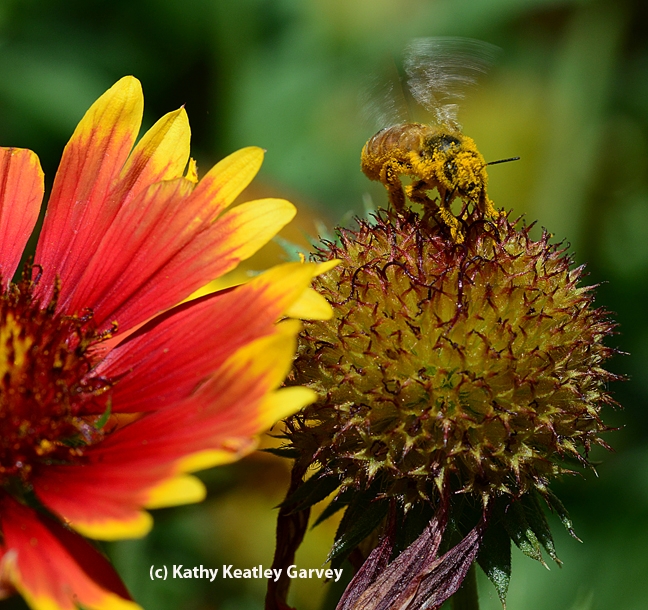