Bruce Hammock (left) wasn't able to attend the 2013 battle. Here's a photo from last year with Christophe Morisseau getting the better of him.
DAVIS--Ready, aim, fire!

In the end, it was a game of numbers. The 44 water warriors participating in the Bruce Hammock lab’s 11th annual water balloon battle at the University of California, Davis tossed 2000 water-filled balloons in 10 minutes.

And, they did so in triple-digit temperatures.

Bruce Hammock, a distinguished professor of entomology who has a joint appointment with the UC Davis Comprehensive Cancer Center, launched the water balloon fest in 2003 as a way to build camaraderie and gain relief from the heat. The water warriors usually toss all the balloons within 15 minutes, a feat known as "15 Minutes of Aim!"

At this year's event, held Friday, July 12, Hammock did not participate due to a meeting that lasted longer than he anticipated.

Not to worry. Administrative assistant Louisa  SuetYi Lo, Photoshopped him in the group photo.

The Hammock lab has the technique down pat, said Lo, who participated in her second balloon battle. The participants fill the water balloons in the lab and then place them in a bucket half-filled with water, a technique to prevent them from popping. When throwing them, they give them a light, quick squeeze so the balloons will pop faster when they hit their target. There’s also a trick to catching them: by catching the balloon softly without popping it, it can be thrown again.

Researcher Christophe Morisseau of the Hammock lab organizes the annual event and invites the Hammock lab, members of the UC Davis Department of Entomology and Nematology, other UC Davis collaborators and their families and friends. Evelyne Morisseau tries to guard her bucket of water. From left are Jayden Robinson, Jasmire Morisseau and Jia Wang, a visiting doctoral student from China.
One of the highlights:  after tossing his last water balloon, Hammock research scientist Sung Hee Hwang turned around and flipped a red  bucket of water over his head to  unsuspecting water warriors, Louisa Lo, and program manager Cindy McReynolds and her children, Elliott and Emma.

“We didn’t see that one coming,” Lo said.

Said McReynolds: "I enjoy the progression of the event - from the camaraderie of filling the balloons, which takes a few hours--to the chaos of battle, the organized clean-up that follows, then we end the day with a picnic in a local park. It’s a great way to bring everyone together."

The Hammock lab draws scholars from all over the world. In addition to the United States, this year’s scholars are from China, Hong Kong, Korea, France, Turkey, Japan, India, the Czech Republic, Germany and Ukraine, Lo said. More are coming within the year from Italy, Brazil and Russia.

In all, the Hammock lab is comprised of 4 administrative staff,  4 graduate students, `12 postdoctoral students, 5 researchers, and 7 visiting scholars.

The Hammock lab is known for working hard and playing hard. Hammock directs the campuswide Superfund Research Program, the National Institutes of Health Biotechnology Training Program and the NIEHS Combined Analytical Laboratory. He is a Fellow of the Entomological Society of America, a member of the prestigious National Academy of Sciences, and the recipient of the Distinguished Teaching Award for Graduate and Professional Teaching in 2008 and the UC Davis Faculty Research Lecture Award in 2001. 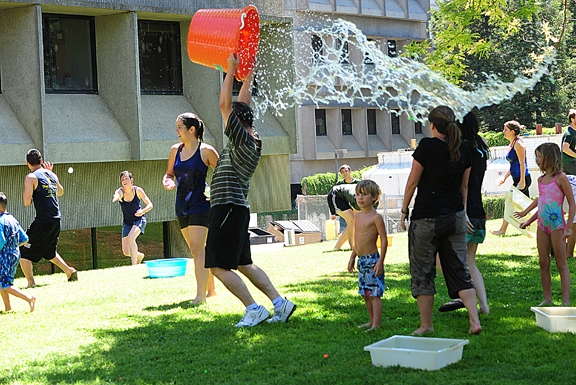 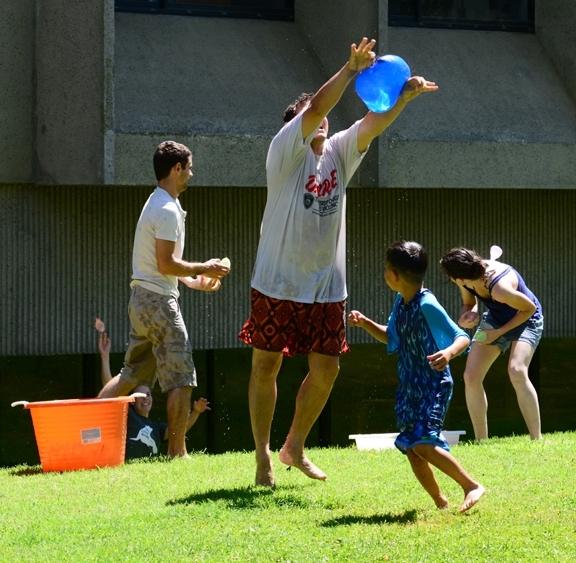 Christophe Morisseau catches a blue water balloon. In the background is Bogdan Barnych, husband of Natalie Vasylieva (she is a postdoc in the Hammock lab). In the foreground: Adele Fargues, visting student from France, and Garrett Kamita. 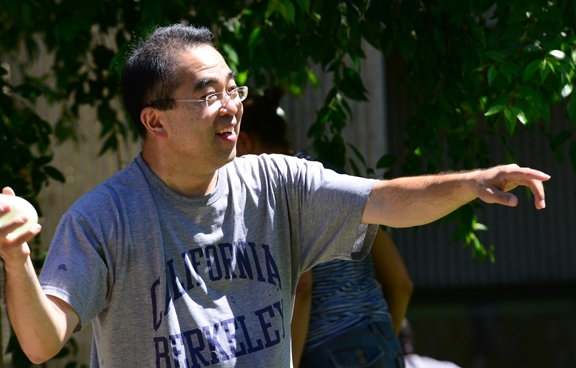 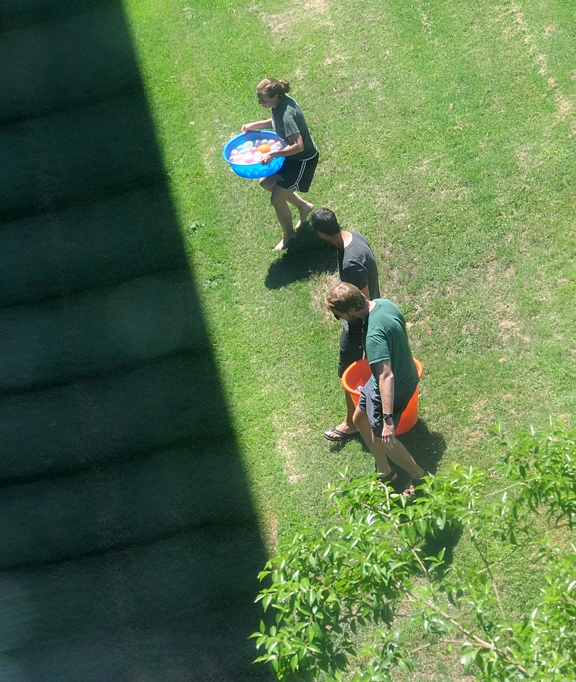