Joanna Chiu
DAVIS--The spotted-wing drosophila, a major fruit crop pest that wreaks economic havoc throughout the world, can be better controlled through strategic timing of insecticide applications linked to circadian activity and detoxification gene expression, according to newly published research by University of California, Davis scientists.

Native to Southeast Asia, Drosophilia suzukii infests soft-skinned fruits such as strawberries, raspberries, cherries, blueberries and blackberries.  The insect was first detected in the United States in 2008 when scientists identified it in the central coastal region of California. It can cause an estimated $300 million in damage annually to California crops.

In pioneering research, the four-member team from the Department of Entomology and Nematology sought to find out the pest’s response to insecticide toxicity and whether it could be predicted through the integration of circadian activity and gene expression profiles. Frank Zalom
“Since we know detoxification of insecticides by all insects including the spotted-wing drosophila (SWD) is under the regulation by the circadian clock, that is, the same endogenous body clock that control timing of physiological phenomena such as sleep-wake cycle, we set out to examine if there is a time over the circadian day when the detoxification system will be at its weakest,” said lead author and molecular geneticist Joanna Chiu of the UC Davis Department of Entomology and Nematology.

“It is possible that if insecticides can be applied at the time when the SWD's defense system against insecticides is at its weakest state, they will be more effective,” Chiu said. “Results from our experiments turned out to be a bit more complicated than we originally envisioned, but we indeed found that at least for malathion, there is an optimal time for application to inflict maximum damage to SWD.  We hope that growers will be able to use fewer insecticides, thereby decreasing damage to the environment and decreasing costs at the same time.”

“We caution growers that we still need to conduct field trials to confirm our laboratory observations,” Chiu addedf. Kelly Hamby
The research, published in the Public Library of Science (PLOS ONE) and titled “Integrating Circadian Activity and Gene Expression Profiles to Predict Chronotoxicity of Drosophila suzukii Response to Insecticides,” combines the molecular biology and circadian biology expertise of the Chiu lab and the integrated pest management expertise of the Frank Zalom lab. It was funded primarily by the California Strawberry Commission.

“SWD is becoming a big problem for growers of soft-skinned fruits such as strawberries, raspberries, blueberries, and cherries all over the world,” Chiu pointed out. “With the need to satisfy insect damage standards and to reduce crop loss, the growers generally adopt high levels of insecticide usage for SWD control and risk reduction. In the long-term, this will lead to development of insecticide resistance, not to mention the damage inflicted on beneficial insects.” Rosanna Kwok
“From my point of view, what is particularly interesting is that insecticide detoxification of many insects including Drosophila suzukii is under circadian control,” Zalom said.  “This knowledge could be particularly interesting for organically acceptable insecticides like pyrethrum that are only effective for a short period of time after they are applied. Pyrethrum is one of the only organic options that can be used by farmers to control Drosophila suzukii, so if its efficacy can be improved by applying sprays at a certain time of day then this could be a positive development.”

Said Hamby: “The paper is a first look at Drosophilia suzukii daily activity rhythms under a temperature and light/dark cycle mimicking California raspberry growing conditions as well as a look at the daily cycling of insecticide susceptibility enzymes that could potentially detoxify insecticides. The next steps would be to include more temperature conditions, more insecticides, and attempt an experiment in the field.”

"For me, the importance of our research is that it allows us to move toward a more effective and efficient way of controlling this pest, which is rapidly becoming of prominent importance because of how fast Drosophila suzukii has been spreading throughout the western US since its initial introduction," said Kwok. "By recognizing temporal differences that may contribute to a difference in toxicity to certain pesticides, we may be able to move toward management programs that are tailored to target a specific species of insect. We may be able to spray less or less frequently if we can find out when these pests are most susceptible."

"As for the future," Kwok added, "I think that as we sequence and fully annotate the D. suzukii genome we can identify more genes that are implicated in toxicity and pesticide resistance."

Chiu praised the work of the graduate students. "I think Kelly and Rosanna really did a fantastic job on this project!" she said.

The study took place under laboratory conditions simulating summer and winter in Watsonville. The team found significant differences in the chronotoxicity of SWD toward malathion, with the highest susceptibility at 6 a.m., “corresponding to peak expression of cytochrome P450s that may be involved in bioactivation of malathion,” they wrote in their abstract.  “Chronobiology and chronotoxicity of D. suzukii provide valuable insights for monitoring and control efforts, because insect activity as well as insecticide timing and efficacy are crucial considerations for pest management.”

The spotted-wing drosophila was first observed in Japan as early as 1916. The females lay their eggs in ripe and ripening fruit, unlike other Drosophila species known to infest overripe and blemished fruit. The larvae feed on the fruit. “The adult is the only stage that can be targeted for control by conventional pesticides,” the UC Davis scientists wrote. The most commonly used insecticides are organophosphates, pyrethroids and spinosyns. 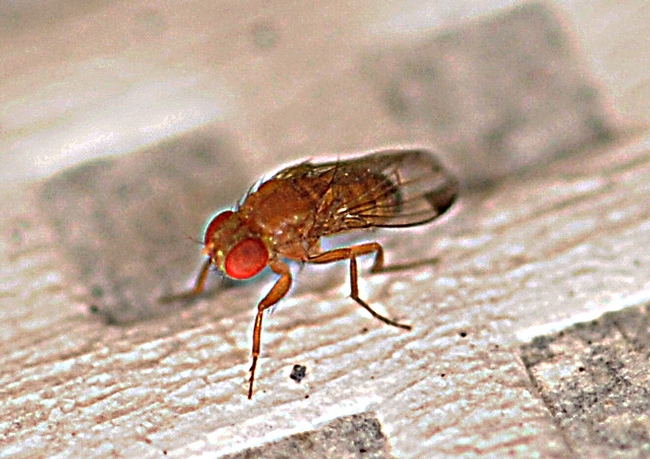