Bordered plant bug nymphs
In recent weeks, Master Gardener hotlines and UC Cooperative Extension offices in the Central Sierra foothills have been bombarded with the question, “What is this bug? They're all over my strawberries!” Samples have arrived in jars and bags, with the sample insects in “living and breathing” condition and also in a decidedly “squished” state.

The identification of all these various insects is the same. It is the bordered plant bug (Largus succinctus or Largus sp.) The adult is pretty easy to identify, but the immature nymphs can sometimes be a bit more difficult, as they don’t look anything like the adults. The nymphs (immature stage) lack fully developed wings. Their color is metalic blue/black with an orange, warning triangle at center.

Bordered plant bugs feed using piercing-sucking mouthparts and are classified as true bugs, order Heteroptera. As such, their food consists entirely of liquid extracted from plant tissues. Their feeding is concentrated on the most nutritious parts of plants such as flowers and fruit. In most cases no control is needed as the insects often move on late in the summer and don’t cause significant harm to ornamental plants. In the food garden, the insects can cause damage by scarring developing fruits, such as strawberries and blueberries. In this case, hand removal is easy by knocking insects into a mason jar, vacuuming them up using a shop vac, or stepping on them. No chemical control is recommended.

If you would like to read more about bordered plant bugs, see the UC Statewide Integrated Pest Management Program's pest note on box elder bugs. Although not the same insect, they are similar and the biology and control are similar 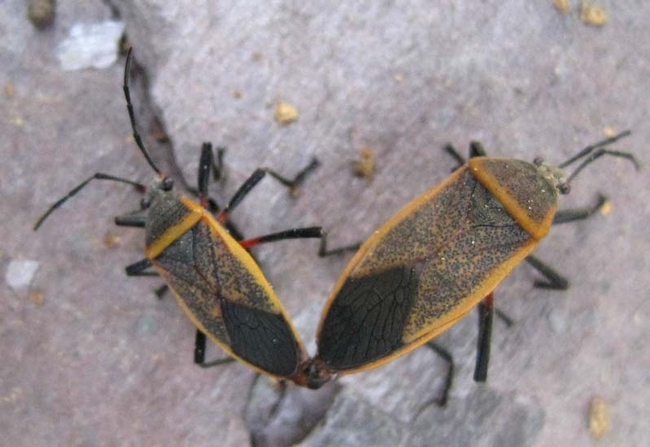 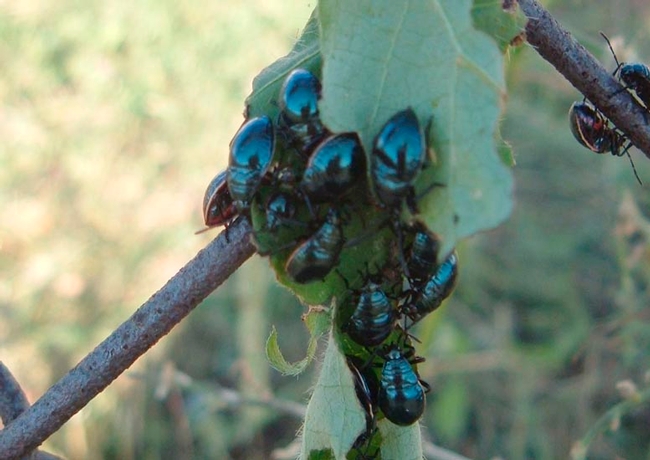 Very early "instar" or baby form of bordered plant bugs
Tags: bordered plant bug (1)
Comments: 39
Comments:
by Gabriele A O'Neill
on August 1, 2013 at 4:03 PM
These bugs have been a regular occurence in Lake County and we've been aware of them for many years now, especially since we had somewhat of an "infestation" about three years ago, where a few could be found on every square foot of ground you looked at. During that year they did significant damage to our fruit (blackberries, soft figs, etc.)and could even be found inside heads of lettuce!
I have seen them mistakenly referred to as boxelder bugs even on the IPM website, but didn't bother poiting it out, since, like you said, they are closely related and the management is the same.
I found that the key to reducing their numbers is to kill the first ones that you notice emerging in early spring, as they are the mothers (or fathers...) of the thousands that follow otherwise.
by Bruce Hagen
on August 1, 2013 at 7:19 PM
They have been quite numerous in Somoma County for the last five years or so. They seem to be everywhere in ornamental landscaping. I haven't noticed any real damage.
by CRinCA
on September 2, 2013 at 4:08 PM
I disagree that these most likely don't cause harm. A large infestation in my garden has nearly whipped out my late harvest. The bugs are harvesting aphids, much like ants do, eating the honeydew the aphids produce. I have had to remove my cucumbers and squash because they were so covered with aphids and several stages of bordered plant bugs that the plants were dying. I will work hard this fall/winter/spring to get rid of them.
by Rebecca Miller-Cripps
on September 3, 2013 at 2:42 PM
Hi CRinCA,
I wonder if you have squash bugs, not bordered plant bugs. The squash bug, Anasa tristis, is a common pest of all cucurbit crops, especially squash and pumpkins. They also have orange edging around their abdomens and they feed on cucurbit leaves. Young squash bugs look very aphid-like. Go to http://www.ipm.ucdavis.edu/PMG/PESTNOTES/pn74144.html for more information.

Rebecca miller-Cripps
by victor
on June 24, 2015 at 12:54 PM
I first noticed a few on my newly planted pineapple plant and I killed them. About a week later I noticed several more, after looking up, I realized I hadn't killed the parents for they were all of the same 'age' so to speak. I killed dozens and for a few days it was good. But they are back in large numbers again. I find about a dozen dead by my door, around eight by open windows, and even more in my young pineapple plant. I don't know where they are coming from.
by Jim Dowling
on July 4, 2015 at 10:42 AM
This is the second consequtive year these bordered plant bugs have been 'thick' around here. They're everywhere - all stages from larvae to adults. They decimated the tomato crop last year. This year I'm dusting the plants around the base with diatomaceous earth. So far, does seem to be helping.
by Janette
on July 31, 2015 at 7:52 AM
Found these first on my Lavender plant in June and they have since moved on to my cosmos. (Not in my veg garden yet.) This is the first time I have seen the nymphs, although the adults (pictured here) look familiar. There doesn't appear to be any damage to my plants so far; so I'm going to leave them alone this year and see what happens.
by Steve N. Ehrmann*
on January 26, 2016 at 9:16 PM
I have the Border Plant Bugs on my Nectaplum, and they effectively destroy most of this otherwise delicious fruit early on. I am wondering if tanglefoot on the trunk could keep them out of the canopy, but they seem to have wings (??). They are on peaches and raspberries as well, but don't seem to do as much damage. I also have the squash bugs on my Sweetmeat Squash. First a few adults are evident, and then thousands of the offspring ! Using a shop vacuum sounds like an effective method of capturing them when I am present. But by then it is probably too late !!
by Scott Oneto
on February 2, 2016 at 12:23 PM
I have heard of fruit injury being a problem with the bordered plant bug, however it does appear to be sporadic and usually is just a problem when large numbers exist. I am not sure if tangle foot would give much control since adults will often fly into the canopy to lay eggs.

Lygus bugs, stink bugs, boxelder bugs and bordered plant bugs all use plant hosts in addition to fruit trees for feeding, reproduction, and overwintering. Most potential problems can be reduced by appropriately managing or removing the
alternate hosts. These bugs feed primarily on broadleaf weeds in the orchard ground cover, on borders, or in nearby crop fields, especially alfalfa. To keep populations from building up in the orchard, it is best to plant a ground cover that will discourage encroaching weed hosts. Perennial grasses or other herbaceous cover crops that do not harbor plant bug pests are recommended. Proper ground cover management is especially critical in peach and nectarine orchards where cat-facing injury can be severe. Dry vegetation, mowing, herbicide treatment, and cultivation can all cause bugs in the ground cover to move into trees in search of alternate food. Avoid mowing, cultivation, and herbicide application during periods when bug
populations are high and fruit is most susceptible to injury, such as during bloom, when fruit is young, and near fruit
maturity. Remove weed hosts on orchard borders where possible and avoid planting alfalfa next to orchards.