A female sweat bee, Halictus ligatus. (Photo by Kathy Keatley Garvey)
If you want to learn about bees--and learn it from the experts--The Bee Course is the place to be.

It's an annual workshop held at the Southwestern Research Station (SWRS) in Portal, Ariz. for conservation biologists, pollination ecologists, and other biologists "who want to gain greater knowledge of the systematics and biology of bees," according to organizer Jerome Rozen Jr. of the American Museum of Natural History (AMNH), New York.

Native pollinator specialist Robbin Thorp, emeritus professor of entomology at the University of California, Davis, has been teaching at the workshop since 2002. Thorp, who received his doctorate in entomology from UC Berkeley, served on the UC Davis faculty from 1964 to 1994, but although he officially "retired" in 1994, he never really did. He continues his research, writings and bee identification at his office in the Harry H. Laidlaw Jr. Honey Bee Research Facility at UC Davis.

Frankly, we at UC Davis don't know what we'd do without him. Thorp maintains a massive educational, research and public service work that brings national and worldwide pride and distinction to UC Davis. No one can say “pollinators” without thinking of Thorp.  For example, MacArthur Foundation Fellow Claire Kremen, a conservation biologist with the UC Berkeley Department of Environmental Science, Policy and Management, said she would never have attempted her much-cited Yolo County pollinator project without his expertise. He not only helped develop the protocol, but he identifies all the species—about 60,000 of them since 1999. Yellow-faced bumble bee, Bombus vosnesenskii. (Photo by Kathy Keatley Garvey)
“He is a fully engaged collaborator in statewide research projects to quantify the effects of pollinator habitat enhancement in farm landscapes to promote sustainable pollination for California agriculture, and has been instrumental in the research," said Neal Williams. associate professor in the UC Davis Department of Entomology. “Robbin is not only involved in others' research, but is a world leader in bumble bee ecology and conservation.  His recent efforts to monitor western bumble bees are often cited as the catalyst behind regional and national efforts to conserve endangered bumble bees.”

Thorp and his colleague John Ascher, an assistant professor at the National University of Singapore and research associate at the American of Natural History, New York, and a key scientist at BugGuide.Net, were working today at the Bohart Museum of Entomology at UC Davis. We captured a quick image of them (below).

Ascher, who received his doctorate in entomology from Cornell University, has taught at The Bee Course since 2004.

Why in Portal, Ariz.? It's one of the richest bee faunas in North America.

All the instructors are volunteers.  In addition to Rozen, Thorp and Ascher, the 2013 team includes Stephen Buchmann of Tucson, who received his doctorate in entomology from UC Davis; James H. Cane and Terry Griswold of the USDA-ARS Bee Biology and Systematics Lab at Utah State University, Logan; Lawrence Packer of York University, Toronto, Canada; and UC Davis alumnus Ronald McGinley of Dewey, Ill. (he obtained his doctorate in entomology from UC Berkeley and then worked at Harvard University and the Smithsonian before joining the Illinois Natural History Survey).

The participants, usually around 22, come from all over the world. They will return home with a collection of properly labeled bee specimens--and a comprehensive knowledge about bees.

From the website: The course "emphasizes the classification and identification of more than sixty bee genera of North and Central America (both temperate and tropical), and the general information provided is applicable to the global bee fauna. Lectures include background information on the biologies of bees, their floral relationships, their importance in maintaining and/or improving floral diversity, inventory strategies, and the significance of oligolecty (i.e., taxonomic floral specialization). Field trips acquaint participants with collecting and sampling techniques; associated lab work provides instruction on specimen identification, preparation and labeling."

And the course significance: "The field of pollination ecology explores the reproductive biology of plants in general, including the biotic and abiotic agents associated with pollination and seed-set. This is of interest for basic research and understanding of world communities and also has significant practical impact as it relates to pollination of economically important crop plants, to survival of endangered plants, and to plant reproduction in threatened habitats. Pollen is moved between receptive flowers by wind, water, birds, bats, beetles, flies, etc., but the 20,000 species of bees worldwide play a dominant role in the sexual reproduction of most plant communities. This course will empower students with 1) the confident use of The Bee Genera of North and Central America, 2) an appreciation for the biological diversity of bees, and 3) sufficient background to learn more about bees and investigate pollination and conservation problems with greater insight."

Said Thorp: "It is a great experience for students to interact with instructors and especially with their peers from around the world.  Instructors all donate their time to teach in the course, but benefit from the chance to get together with colleagues and a new cohort of interesting students each year.  Every class is different. that is, it takes on its own personality, and each student brings something new and different to the mix." 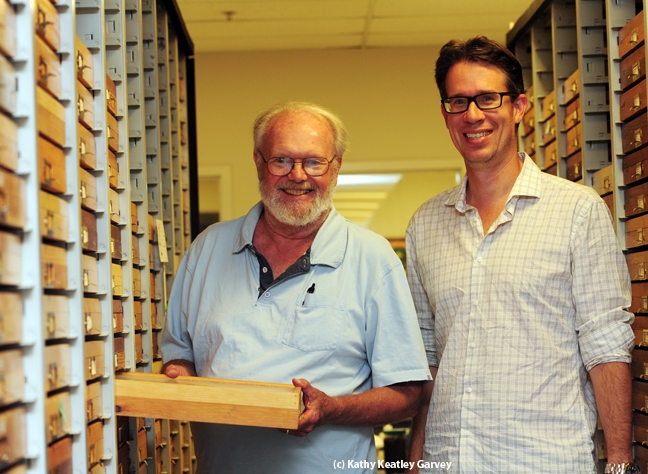 Robbin Thorp (left) of UC Davis and John Ascher of the National University of Singapore are two of The Bee Course instructors. (Photo by Kathy Keatley Garvey) 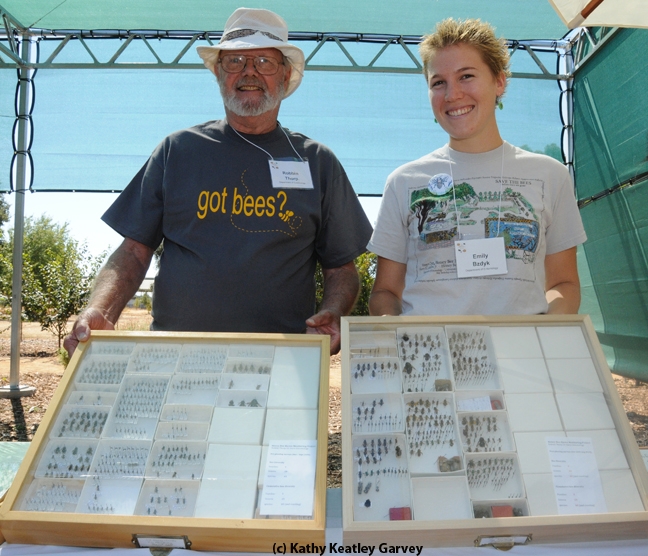