Danica Maxwell
DAVIS--Graduate students in the UC Davis Department of Entomology and Nematology are gearing up for two events: the Linnaean Games and the Debate Team competition at the Entomological Society of America's 61st annual meeting, to be held Nov. 10-13 in Austin, Texas.

Matan Shelomi, who is studying for his doctorate in entomology with major professor Lynn Kimsey, director of the Bohart Museum of Entomology, captains the 2013 UC Davis Linnaean Team. Others on the team are Mohammad-Amir Aghaee, doctoral student of research entomologist Larry Godfrey; Rei Scampavia, doctoral student who studies with major professors Edwin Lewis and Neal Williams; and Danica Maxwell, who is studying for her master's degree with major professors Michael Parrella, chair of the Department of Entomology, and Edwin Lewis, vice chair. Larry Godfrey serves as the coach.

Linnaean Games are college bowl-style games based on entomological facts and insect trivia. Team members respond to the moderator's questions by buzzing in with the answers. The preliminary rounds conclude with the finals, set for Tuesday, Nov. 12 from 5:30 to 7:30 p.m.

The UC Davis Debate team is captained by Aghaee  and coached by Parrella. Team members are Shelomi, Danny Klittich, doctoral student of Parrella; and Irina Shapiro, a doctoral student of Lewis. The UC Davis  debaters have been assigned the "con" side of the debate, "Using GMOs to Increase Food-Security in Regions Where the Technoogy is Not Universally Accpeted." They will be facing Auburn University, Alabama, which has been assigned the "pro" side.  The event takes place at 3:49 p.m. Tuesday, Nov. 12.

The UC Davis Linnaean Team won the right to compete in the ESA competition after winning second place at the Linnaean Games hosted by the Pacific Branch of ESA (PBESA). First-place honors went to UC Riverside team. The UC Davis team that placed in the PBESA included Shelomi, Aghaee, Scampavia, and Alexander Nguyen, an undergraduate entomology major student who volunteers at the Bohart Museum of Entomology. Shelomi and Aghaee are veteran competitors in the Linnaean Games.

In last year’s national finals, held in Knoxville, Tenn., UC Davis lost to the University of Wisconsin, which went on to compete in the finals. The University of Georgia took home the trophy.

The Linnaean Games are named for Swedish-born Carl Linnaeus (1707-1778) a renowned taxonomist, ecologist and botanist.

Also at the ESA meeting, Shelomi will be honored as the recipient of the John Henry Comstock Award from the Pacific Branch of ESA. 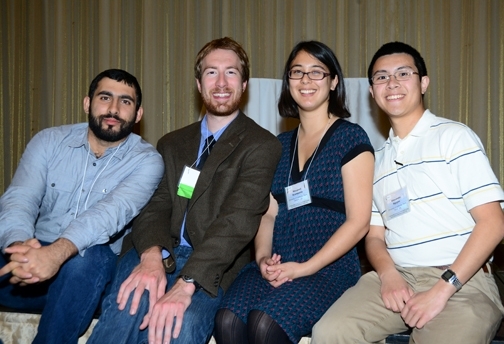