Joanna Chiu in her lab. (Photo by Kathy Keatley Garvey)
DAVIS--The spotted wing drosophila, a major pest that targets berries and cherries and other fruits in the United States, Canada and Europe, is itself being targeted, thanks to ground-breaking genome sequencing at the University of California, Davis, and a public-access web portal hosted at Oregon State University.

The work is expected to accelerate basic and applied research, leading to better monitoring and control strategies for the pest.

Officially published Dec. 1 in the journal G3 (Genes Genomics and Genetics), the open-access research has been available online for several weeks and drawing global attention.

“To enable basic and applied research of this important pest, Drosophila suzukii, we sequenced the genome to obtain a high-quality reference sequence,” said molecular geneticist Joanna Chiu of the UC Davis Department of Entomology and Nematology. Chiu and Professor David Begun of the UC Davis Department of Evolution and Ecology led the genomics team of collaborative researchers from four institutions.

The posting of the genome and comparative sequence analysis on the publicly accessible SpottedWingFlyBase web portal could lead to more species-specific weapons to combat the destructive pest, Chiu said. Scientists are looking at its biology, behavior, food and odor preferences, and pesticide resistance.

“Many researchers are working hard to study the biology of this insect through basic and applied projects, and we hope our efforts in presenting our genomic data in a user-friendly web portal will democratize the sequence data and help facilitate everyone’s research, especially those who do not have expertise in genome and sequence analysis,” she said.

The spotted wing drosophila, a native of Asia that was first detected in the United States in 2008, is wreaking economic havoc on crops such as blueberries, cherries, blackberries and raspberries. This fly lays its eggs inside the ripe or ripening fruit, and the developing larvae feed on the soft fruit, crippling crop yields. Frank Zalom, lead UC Davis investigator. (Photo by Kathy Keatley Garvey)
The spotted wing drosophila is a vinegar fly about 1/16 to 1/8 inch long with red eyes, pale brown thorax, and a black-striped abdomen. The males have a distinguishing black spot toward the tip of each wing. Females have no spots but have a prominent, saw-like ovipositor for drilling fruit to lay their eggs.

Chiu teamed with scientists at UC Davis, Oregon State University (OSU), the China National Gene Bank and the American Museum of Natural History as part of a $5.8 million project on the biology and management of spotted wing drosophila, funded by a U.S. Department of Agriculture Specialty Crops Research Initiative grant to OSU entomologist Vaughn Walton and a team of investigators including Professor Frank Zalom of the UC Davis Department of Entomology and Nematology, who is the lead UC Davis investigator.

Zalom, recently inducted as president of the nearly 7000-member Entomological Society of America, said that the G3 article “presents a high quality reference sequence of Drosophila suzukii, examination of the basic properties of its genome and transcriptome, and description of patterns of genome evolution in relation to its close relatives.”

As of Nov. 27, SpottedWingFlyBase has drawn more than 3000 page views from 20 countries, including the U.S., France, Italy, Belgium, China, Spain, Japan, Germany, and Great Britain, Zalom said. “Given this impressive response and the worldwide importance of Drosophila suzukii, I expect that the G3 article will become very highly cited and cast Dr. Chiu as a central figure in future Drosophila suzukii genomic studies related to topics such as insecticide detoxification, odorant reception and regulatory entomology.”

OSU entomologist Vaughn Walton, lead investigator of the USDA grant, said: “Scientists from all over the world are interested in knowledge locked inside the fly’s genetic material.” He also pointed out that the genome work may relieve the fears of countries wishing to export American fruit, but not the pest. By finding the fly’s unique genetic signature, scientists hope that DNA testing will quickly determine if ready-to-be-shipped fruit contains spotted wing drosophila larvae.

The UC Davis team included the Joanna Chiu lab and the Frank Zalom lab, both in Department of Entomology and Nematology, and David Begun’s Drosophila evolutionary genetics lab in the Department of Evolution and Ecology. They collaborated with Walton and spotted wing drosophila project leader Linda Brewer of OSU; Ernest Lee from the American Museum of Natural History, and Xuanting Jiang and Guojie Zhang of the China National Genebank, BGI-Shenzhen. 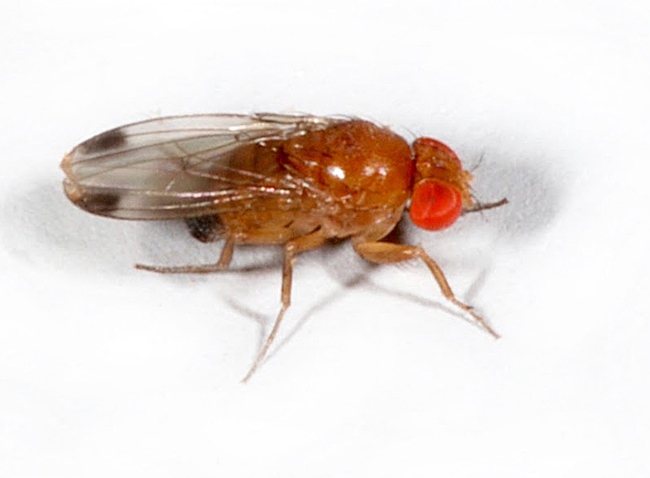