Especially when the result is an auction item.

Take the case of "The Sting," a memorable lunch-hour photo that went viral. Extension apiculturist Eric Mussen and I were walking through the apiary of the Harry H. Laidlaw Jr. Honey Bee Research Facility, UC Davis, when he stopped abruptly.  "Kathy, get your camera ready," he said. "A bee is about to sting me."

The resulting image shows a trail of abdominal tissue, aka "guts."

It's copyrighted, registered with the U.S. Copyright Office, but after being named one of Huffington Post's Most Amazing Photos of 2012 and one of the World's Most Perfectly Timed Photos, it now appears on the Internet as owned by thousands of others--people with no qualms about removing my copyright;  inserting their own copyright; uploading it;  tagging it with the URL of their website; or trying to use it for commercial purposes.

Meanwhile, the photo keeps traveling 'round the world, accompanied by assorted comments:

Fast forward to November of this year.  Eric and his wife, Helen, decided to offer the mounted image as an auction item at the California State Beekeepers' Conference, held Nov. 19-21 at Lake Tahoe. Both Eric and I signed it, hoping that it would net a few dollars for CSBA.

So, how much did CSBA receive?

John Miller of Newcastle, outgoing president of CSBA, placed the winning bid. "The photo," he said, "will be in my house for visitors to enjoy/squirm while viewing."

And yes, he's been stung like that, with the abdominal tissue trailing. Usually a bee sting is a clean break.

"If you keep bees – sooner or later – you're going to take an ugly stinging," Miller commented. "I feel sorry for the bee.  Usually, she is merely reacting to my own behavior – which ran outside her ability to understand. I 'act out' - she dies."

You may remember John Miller from the book, The Beekeeper's Lament: How One Man and Half a Billion Honey Bees Help Feed America, written by award-winning journalist Hannah Nordhaus.

Nordhaus describes Miller as a guy who loves bees, spreadsheets, humor and his friends. He's descended from Nephi Ephraim Miller, a Mormon farmer known as "the father of migratory beekeeping" and the first beekeeper to produce "the nation's first million-pound crop of honey."

Miller, based in Gackle, N.D. and Newcastle, Calif., maintains one of the biggest beekeeping operations in the country. Nordhaus hints that it's not quite as big as South Dakota's Richard Adee, who has 80,000 hives.

Miller has a "Jimmy Stewart-like voice and an eternally bemused expression," Nordhaus writes. Miller doesn't cuss. No, indeed. Nordhaus points out that he uses "cowboy words" (especially when he gets stung).

Now "The Sting" is in Miller's house "for visitors to enjoy/squirm while viewing."

Me thinks that once they see his prized auction item, they will not only squirm, but utter a few choice words of their own. Non-cowboy words. 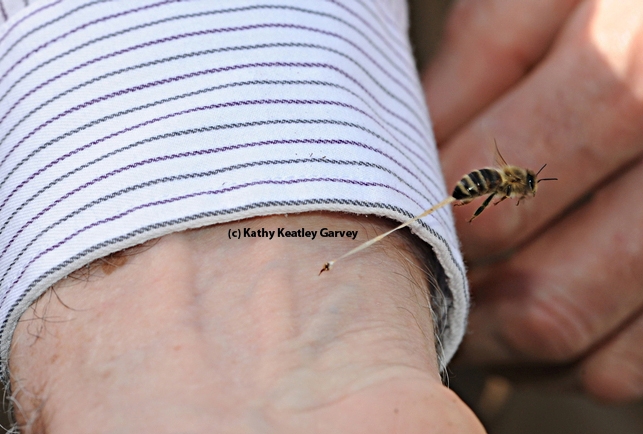 This image, "The Sting," drew $900 at the California State Beekeepers' Association auction. (Photo by Kathy Keatley Garvey)
Tags: Caifornia State Beekeepers'' Association (1), Eric Mussen (245), John Miller (2)
Comments: 2
Comments:
by Anne E. Schellman
on December 5, 2013 at 8:12 AM
Kathy, I share your sentiments about shopping! (earlier post) and really enjoyed reading this post. Great bit of history about honeybees.
by Rich
on December 7, 2013 at 9:45 AM
I saw it at http://amazinglytimedphotos.com/honeybee-death-final-sting/?006 and was curious. I've handled honeybees in Sunflowers as a child and they seemed quite tame.
Leave a Reply: