Bug Squad
sitenum=63
Happenings in the insect world
Yes, Indeed, Let's Hear It for the Bees

Great article in the Tuesday, April 28 edition of  The New York Times on "Let's Hear It for the Bees."

And did I mention that the photo accompanying the article is one I shot last year on a Yolo County farm tour? The bee is nectaring a button willow (Cephalanthus occidentalis).

In The Times' article, Leon Kreitzman writes about the rhythmic opening and closing of blossoms.  "Flowers of a given species all produce nectar at about the same time each day, as this increases the chances of cross-pollination. The trick works because pollinators, which in most cases means the honeybee, concentrate foraging on a particular species into a narrow time-window. In effect the honeybee has a daily diary that can include as many as nine appointments--say 10:00 a.m., lilac; 11:30 a.m., peonies; and so on. The bees'  time-keeping is accurate to about 20 minutes."

That's fascinating stuff. Kreitzman is so right when he calls honey bees "nature's little treasures." He points out that  "They are a centimeter or so long, their brains are tiny, and a small set of simple rules can explain the sophisticated social behavior that produces the coordinated activity of  a hive. They live by sets of instructions that are familiar to computer programmers as subroutines--do this until the stop code, then into the next subroutine, and so on."

Kreitzman's new book on seasonal rhythms will be published in May. He earlier penned Rhythms of Life with neuroscientist Russell Foster of Oxford.

If we all paid more attention to the honey bees, we'd appreciate all the work they do and maybe we'd try to protect them more.

Yes, let's hear it for the bees! 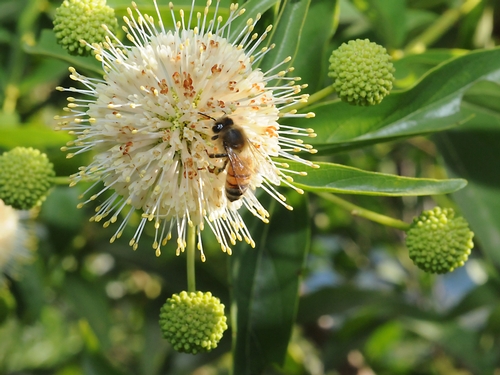