DAVIS--Honey bee guru Eric Mussen, Extension apiculturist at the UC Davis Department of Entomology and Nematology who will be retiring at the end of June, has seen and used many a smoker during his 38-year career.

But this one is different.

In honor of his service, the California State Beekeepers’ Association recently presented him with a plaque decorated with a smoker “for 38 years of work and support.”

Throughout his career, Mussen has offered advice to scores of people and figuratively put out many a fire involving beekeeping and pollination issues.

A smoker, a device that beekeepers use to calm honey bees so they can open their hives, masks the smell of the alarm pheromones released by guard bees. It also prompts the bees to gorge on honey.

Considered by his peers as one of the most respected and influential professional apiculturists in the nation, Mussen presented a slide show of some of the highlights of his career during his two-hour presentation on “The Most Interesting Time in Beekeeping.”

“I got carried away,” Mussen said later.  “I was nearly at the end of the second hour when I was asked to wrap up my 45-minute presentation.  Many listeners said that they still hope to hear the ‘more current’ portion that had to be omitted.”

Mussen has given presentations to CSBA since joining the UC Davis faculty in 1976. He is also the organization’s apiculturist and parliamentarian and served as a delegate to the American Beekeeping Federation.

His doctoral research focused on the epidemiology of a viral disease of larval honey bees, sacbrood virus.

Mussen educates the beekeeping industry and general public with his bimonthly newsletter, from the UC Apiaries, which he launched in 1976. Since 1976, he has also written Bee Briefs, addressing such issues as diseases, pesticides and swarms. Both publications are on the departmental website at http://ucanr.org/sites/entomology/Faculty/Eric_C_Mussen/Apiculture_Newsletter/.

The recipient of numerous state and national awards, Mussen is a worldwide authority on honey bees, said Jackie Park-Burris, a commercial queen breeder in Butte County and a past president of the California State Apiary Board.

Recruitment is underway for his successor, who will begin as an Extension assistant apiculturist. 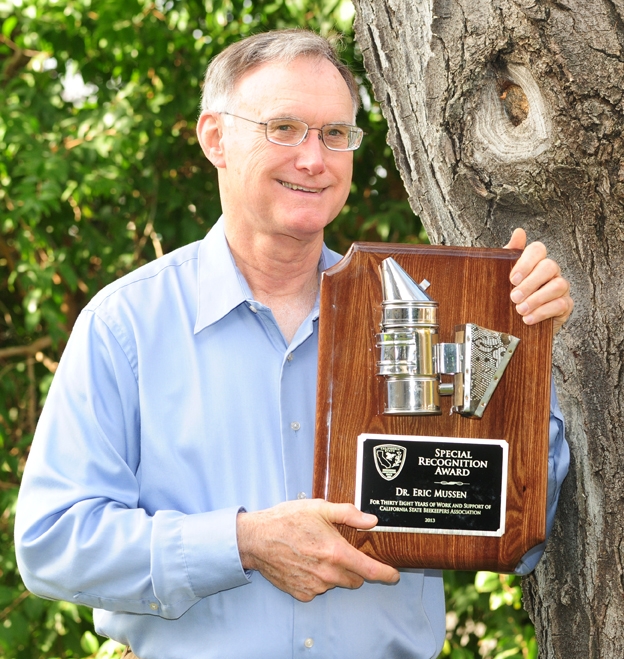