Queen bumble bee buzzing around the porch light at night. (Photo by Kathy Keatley Garvey)
This is the story of what may be three parasitized bumble bees.

Or to put it more precisely, three Bombus melanopygus queens.

Early this morning, in between dark and dawn, three black-tailed bumble bees buzzed around our porch lights.  Now, bumble bees don't venture out at night and they certainly don't head for porch lights--they head for flowers in the daytime--so immediately we're hypothesizing an infestation by the parasitoid phorid fly, Apocephalus borealis, aka "zombie fly."

We had earlier heard Professor John Hafernik of San Francisco State University discuss this fly at an entomological meeting in Sacramento.

The female flies lay their eggs in bumble bees, wasps and honey bees. Certainly not a nice thing to do. Eventually the eggs hatch into larvae and emerge from the dead host.

It was Hafernik who discovered that the "zombie fly" infests honey bees. He and his colleagues published their work, "A New Threat to Honey Bees, the Parasitic Phorid Fly, Apocephalus borealis,"  in PLOS One in January 2012. They revealed that the parasitized, disoriented honey bees leave their hives at night and head for the lights.

Fast forward to today...and the three bumble bees buzzing around our porch lights. That erratic, uncharacteristic, porch-light behavior prompted us to take them to native pollinator specialist/bumble bee expert Robbin Thorp, emeritus professor of entomology at UC Davis. Thorp is a co-author of the pending  Bumble Bees of North America: An identification Guide (Princeton University Press).

It was he who identified them as Bombus melanopygus queens.

Phorid flies? Nematodes? Something else? Nothing?

In addition to carbohydrates, Thorp gave them a protein patty made by staff research associate/beekeeper Billy Synk, manager of the Laidlaw facility.

"I'll put in a pollen lump or two tomorrow," Thorp said, "to see if any are interested in becoming broody and starting a nest." 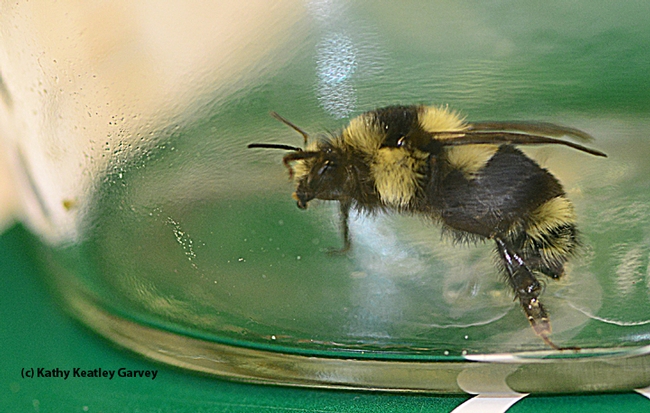 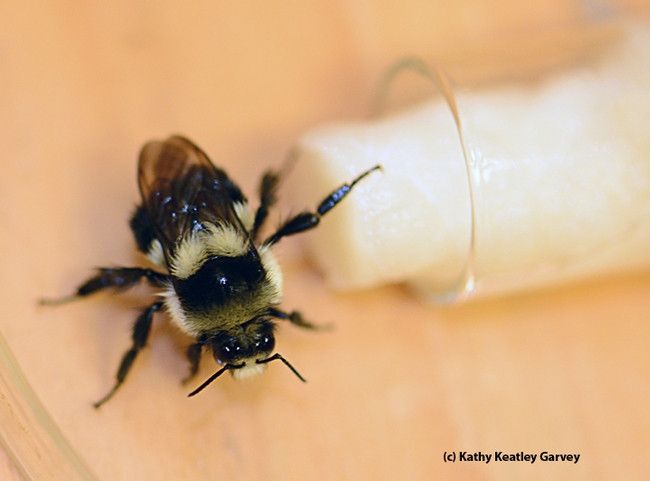 A little nourishment for this queen bumble bee. (Photo by Kathy Keatley Garvey) 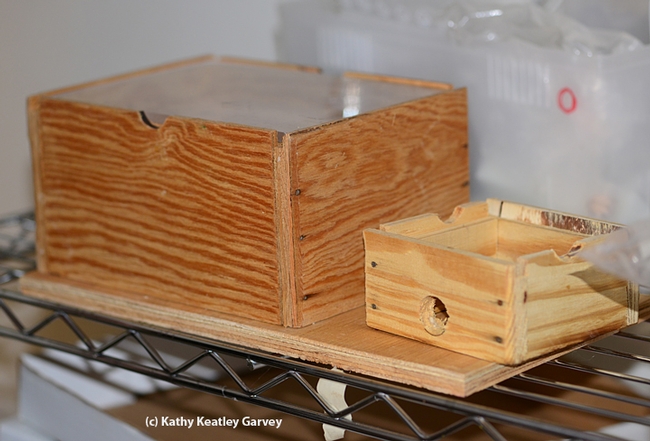 This is the bumble bee-rearing chamber/observation box that Robbin Thorp built. (Photo by Kathy Keatley Garvey)
Tags: Billy Synk (9), Bombus melanopygus (19), bumble bee (31), John Hafernik (1), queens (2), Robbin Thorp (245)
Comments: 5
Comments:
by Anne E. Schellman
on January 10, 2014 at 7:35 AM
Neat story! I'm curious to see what happens with the "zombees." Hard not to hope they are just fine...
by eileen landis
on July 3, 2014 at 1:00 PM
Observed 3 bumble bees disoriented, on the ground, midmorning, near a tree, going in circles, climbing then falling, up, down over and over again.
by Amber
on July 21, 2014 at 2:42 PM
My son said that there were a ton of bees walking around in circles at his store. Not flying. What could that mean.
by Kathy Keatley Garvey
on August 1, 2014 at 12:09 PM
Amber, this could be from pesticide poisoning. Retired Extension apiculturist Eric Mussen of UC Davis says: "Yes, they may have been exposed to sublethal doses of pesticides.
But, usually there are individual differences on how they respond: trembling, twitching, walking around like drunks, buzzing on their backs, ground-jarring short flights into the ground, etc. I have not seen Zom-bees in person. They usually fall to the ground, perhaps crawl around a bit, but when the fly larvae crawl out through the "neck" the bees pretty much just drop dead. (Note: Bug Squad post on zombees at http://ucanr.edu/blogs/blogcore/postdetail.cfm?
postnum=6589)
by Mackenzie McAlpin
on July 4, 2020 at 7:21 PM
It’s the 4th of July and it’s 10:20 pm in Philadelphia and 3 bumble bees are flying to the lights and not making much sense in flying! It’s sad cause it’s also a crazy night full of fireworks (annoying) anyway! This is wild and I hope these three gals make it through the night okay.
Leave a Reply: