Bug Squad
sitenum=63
Happenings in the insect world
Can Bees Have Heart Attacks? We know that honey bees work hard.  They forage for food within a four-mile range of their hive. They can fly up to 15 miles per hour, and their wings can beat about 200 times per second, or 12,000 beats per minute. Sometimes they'll visit 50 to 100 flowers on a collection trip. No wonder worker bees live only four to six weeks during their peak season. They literally work themselves to death.

But, can bees have heart attacks? A curious mind wanted to know and posed the question on Quora, a website known as "your source of knowledge." Ask a question and an expert will answer.

Matan Shelomi, doctoral candidate in entomology at the University of California, Davis, responded. He answers scores of questions on Quora. (He won a Shorty award for his answer to "If you injure a bug, should you kill it or let it live?”).

"Insects have a heart, sometimes, but no arteries or veins. They have an open circulatory system: all their organs just float in a goo called 'hemolymph' that is a combination of lymph and blood. Some insects, bees included, have a heart and an aorta (the vessel leading out of the heart) that pumps the blood and gives it some semblance of direction (from the back of the insect to the front), but beyond that there is no circulatory system. The heart floats in the hemolymph along with everything else. No way to stop it from receiving blood flow, because it's surrounded by it.

"Furthermore, unlike human blood, insect blood doesn't carry oxygen. They have a special network of tubes called trachea that provide oxygen: think of it having air vessels go from your lungs all throughout your body instead of blood vessels. Conceivably the trachea leading to an insect heart could all get blocked by something from the outside, which would be the closest thing to a 'heart attack' in an insect, but there's no record of that happening and its unlikely anyway. So, nope, no insect can have a heart attack. Scare them to your heart's content."

So, this month being "American Heart Month" and all, we don't have to worry about honey bees having heart attacks. All drones (male bees), however, pay the ultimate price when they mate with a queen. During the in-flight mating process, parts of the male anatomy are ripped out and they die. 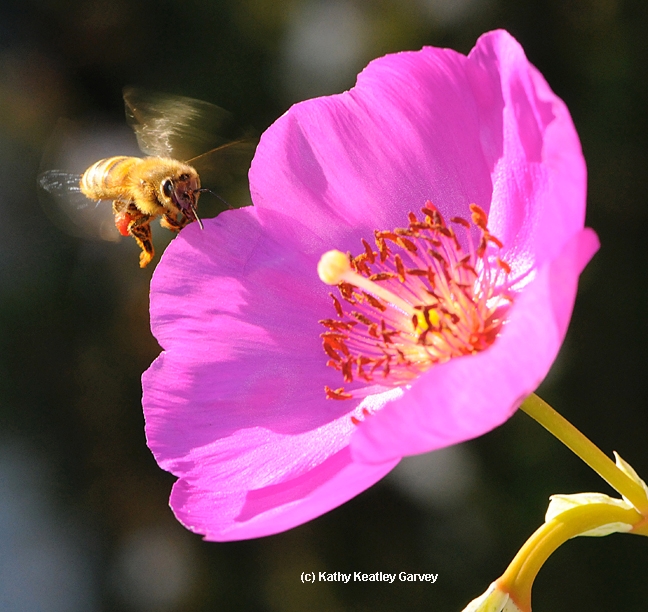 Honey bee heading toward rock purslane, Calandrinia grandiflora. (Photo by Kathy Keatley Garvey)
Tags: heart attacks (1), honey bees (373), Matan Shelomi (16), Quora (3)
Comments: 2
Comments:
by Marcia Mar
on April 28, 2020 at 5:00 PM
Do bees and wasps have heart beat? Rhythm?
Do they make any other sound when not buzzing?
How do they communicate?

I was meditating when a bee and wasp entered both ears simultaneously.
by Meddco
on July 29, 2020 at 10:49 AM
Wow, such a useful blog you are sharing through your website. Thanks a lot! I was very interested to read your opinions.
Leave a Reply: