The recent rains were a welcome relief for many parts of our state, but we are still in a serious drought with our reservoirs and snowpack at historical low levels. Ensuring adequate water for crops will be a challenge this year.

In general, perennial crops, such as orchards and vineyards, cannot survive extended periods without irrigation. However, alfalfa is more resilient because it can go into a drought-induced dormancy over the summertime, at least for one year. The tradeoff is that without water there will be little yield, but research has shown that the stand will persist on most soil types and yield will recover the next year once water is applied to the field again.

In most years hay growers rely on winter rainfall to fill the soil profile. This has not happened yet and the growth of many alfalfa fields is behind due to the lack of moisture. Frost also impacted a number of fields this winter, especially new stands, causing delayed growth. The drought may also be exacerbating the impact of aphids in alfalfa fields in some parts of the state, further stunting fields.

Unless the recent rains continue and are sufficient to refill the soil profile, growers should apply water to alfalfa to ensure adequate soil moisture so that first cutting yields are maximized, since they tend to be of highest value. Once we fall behind on water for perennial crops, it is hard to catch up due to the high evapotranspiration rates during summertime.

When water is scarce, summer could be a time to allocate water from alfalfa to other crops that must have water. However, depending on residual soil moisture content, alfalfa yields will likely be reduced by 90% or more. No one wants to dry up a field and forgo the potential income and feed for animals. However, in a year like this, producers may not have many options and drying up an alfalfa field for part of the season might be a viable option because of alfalfa's ability to recover once the field receives water the following winter. Deficit irrigation for more than one year though may be damaging to alfalfa hay fields. 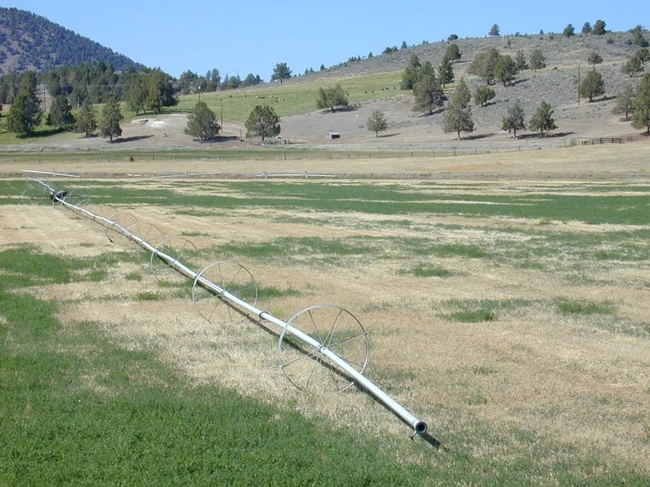 Photo: Impact of no irrigation on alfalfa during summertime. However, due to alfalfa’s resilience to drought, yield will recover once the field receives water the following winter.
Tags: alfalfa (43), drought (3)
Comments: 6
Comments:
by Bill Wilson
on February 24, 2014 at 5:23 PM
Here in Central Texas we have no irrigation and no useable rain for July & August.
Typically we have an Eastern Humid Climate through June. A Western Arid Climate for July and August. Followed by irregular rains for September to December. Enough for a Fall Cutting and to germinate a Fall Seeding.
The July Regrowth will bloom and set seed. Sixty years ago, in the days of Public Domain Alfalfa we could harvest the seed. Now that seed will shatter during baling and we can have a Volunteer Thickening of the stand, if treated like a Seedling Stand.
by Jim Anderson
on March 4, 2014 at 12:15 PM
Bill, we farm in far Northern California in the Cascades. Our soil his a water table of 3-6 feet. When the roots enter the water table it is my belief (after 45 years growing alfalfa here) that the roots essentially die at the water table after a couple of years. The top 3-6 feet are the only roots, then, for water uptake. So if the top soil dries up it can drastically affect the growth if the alfalfa is "used" to much irrigation. However (I am following your post on Agtalk) I believe you are right that driving alfalfa roots down by using minimal irrigation is a good practice. We have been doing that for many years. Last year we didn't irrigate our alfalfa at all and still made 4 cuttings at 5 tons (not top yields but decent for our area) of excellent hay. One advantage to lot's of our soil profiles is they have good capillary action and will pull some of the sub moisture up.
I farmed a field years ago for an owner who didn't want to invest in irrigation so it was totally dryland. I farmed it for 5 years and consistently got 4-5 tons per acre.
by Bill Wilson
on March 5, 2014 at 5:09 PM
Jim I assume you are in Steve Orloff's general area. He is one of my forage heroes. His advocated using the mineral analysis as a plant analysis. Orloff was visualizing was visualizing cutting alfalfa well before the early bud stage normal for plant analysis.

Years ago alfalfa was irrigated with river water, but one night the legislature canceled everyone's right to water access.
HERE they had to start irrigating in March to assure the soil would be at capacity on the first of July. We can not pour enough water onto moisture stressed soil. Last Summer we had 2 five inch rains and still was drought stressed.

Some years ago I met Tom Ellis at a American Farm Bureau meeting. He was saying you all were trying to get CAFO up and running. I told him if they do I will join as an out of state member. I did and have attended 6 of the annual alfalfa/forage conferences. A fine organization.

The only California Style alfalfa growing is down near Merced. I went through their B-52 training there a number of times.

Have a Grand & Glorious Season.
by Jim Anderson
on March 5, 2014 at 9:48 PM
Bill,
Yes I am fairly close to Steve. He is Yreka I think and I am in Tulelake...still part of the same county. I've never met Steve but have read several of his articles. Very informative!

Interesting about the 2 five inch rains with no moisture retention. I hope the farms down south aren't experiencing this and able to use some of the current rains. It's been raining quite a bit here too and the soil is beginning to hold some but we're still not looking good for the summer.

We've been monitoring the moisture pretty close and it looks like the rain is percolating down pretty quick. We fall flooded quite a bit of ground and it is still saturated so the rains just kind of keep topping it off. We may have a problem with ground too wet to plant this spring. Lot's of irony in farming isn't there?

You, too, have a good season.
by Bill Wilson
on March 7, 2014 at 4:33 PM
Actually the 5" rains with little visable effect may require some explaining.
This soil by nature develops deep cracks when dry. Those two rains had cracks 2-3 inches wide and no bottom for a 15 ft carpenters tape. All that water went deep and very little went to the shallow root zone.
In 2012 we had a simularsituation, but with several light rains overf the weeks prior to the big 4" rain. The cracks were all closed up and non of that rain went deep it all wentg into the shallow root zone and down the river to the Gulf of Mexico.

On the Orloff papers, get some from California, Washington, & Idaho talking about the advantages for using hay samples for plant analysis.
I think it works here from early bud to full bloom. The kicker is if who ever is managoing the harvesting does not watch his humidity and shatters a lot of leaves there will be some odd results.
Think about it. Half stems and half leaves to start with. Shatter half of the leaves off the result is only a 25% loss in total dry matter but a major loss of leaves.
by Jim Anderson
on March 9, 2014 at 2:18 PM
I always understood Steve's plant sample to be taken from the field in plots and then oven dried and three different types of samples separated from each plot. Are you taking the harvested sample and doing the same thing? Also we almost always harvest prebud if possible. We regularly test for hay quality, (TDN/ADF and such) is it this test that you use for plant analysis?

Irrigation is still the main issue for us. I stated earlier that we fall flooded but it was not on our alfalfa ground. I've been keeping a close watch on our soil moisture profiles and, though we've added some moisture in recent weeks, we still are quite a bit drier than last year when we didn't irrigate. I am concerned about the drought prospects this year. As stated above, we only have a 3-6 foot root zone. I am a believer in establishing a drought resistant alfalfa but moisture is still critical.
Jim
Leave a Reply: