It won't bloom until summer, but already many eyes are on the California buckeye.

The tree's blossoms are poisonous to honey bees.  Bees are attracted to them and forage on them, but the end result of the food provisions to the colony can be deformed larval development.

We've seen bee hives within a quarter of a mile of California buckeyes (Aesculus californica). And we've seen honey bees, native bees and other pollinators foraging on the blossoms.

At the recent UC Davis Pollinator Gardening Workshop hosted by the California Center for Urban Horticulture, Extension apiculturist Eric Mussen talked about the poisonous plants. (See PowerPoint presentations.) That led to one workshop participant wondering if the flowers of the California buckeye are poisonous to native bees. (Honey bees are not native; the European colonists brought them to the Jamestown colony, Virginia, in 1622).

Responded Mussen: "My guess: either the native bees that have been in the areas around California buckeye for a long, long time are not poisoned by the pollen or they have been selected (by death of the other genetic types) to avoid the pollen, that eons of natural selection have adapted them to coexist with California buckeye while using their resources."

Native pollinator specialist Robbin Thorp, emeritus professor of entomology at UC Davis, shared: "We know California buckeye nectar and/or pollen is toxic to honey bees from years of experience with managed hives. Toxicity to native bees and other flower visitors is not so easily determined and to my knowledge has not been investigated. The fact that populations of native bees and butterflies visit California buckeye flowers and continue to persist in areas where the tree is a dominant part of the plant community tends to confirm what Extension apiculturist Eric Mussen says about them. Some good research projects here. So we still do not know if it is the nectar, pollen, or both that may be toxic to honey bees, much less to native flower visitors."

According to gardeningguides.com, the seeds in their raw state are poisonous to humans, but native Americans learned  to get around that and use them for food. They pounded the seeds into flour and then cooked the mixture.  "This tree had multiple cultural uses among California Indian tribes," the website says. "Many indigenous groups utilized buckeye seeds for food, often when other plant food sources were scarce. These tribes included the Costanoan, Salinan, Kitanemuk, Serrano, Wappo, Sierra Miwok, Coast Miwok, Chumash, Kawaiisu, Northern Maidu among others. The Pomo ate the seeds even when other important food plants were plentiful. The seeds are poisonous to humans in the raw state. Thus, the nuts were cracked open with a rock, the shells removed, the seeds pounded into flour, and their toxic saponins removed in a lengthy leaching process. The meal was subsequently cooked and eaten. There are many different methods for processing and cooking buckeye seeds for food, depending upon the tribe. The seeds have medicinal properties and were cut into pieces, mixed with water, and made into suppositories for hemorrhoids by the Costanoan and Kawaiisu. The Pomo cut bark from the base of the tree and made a poultice, which was laid on a snakebite. Young buckeye shoots were sometimes used as spindles or twirling sticks in fire-making kits of the Sierra Miwok, Northern Maidu, Wappo, Yahi and other tribes. Many tribes mashed buckeye nuts and poured the contents into quiet pools to stupefy or kill fish."

And, no wildlife will eat buckeye seeds except squirrels, such as the California ground squirrel (Citellus beecheyi). 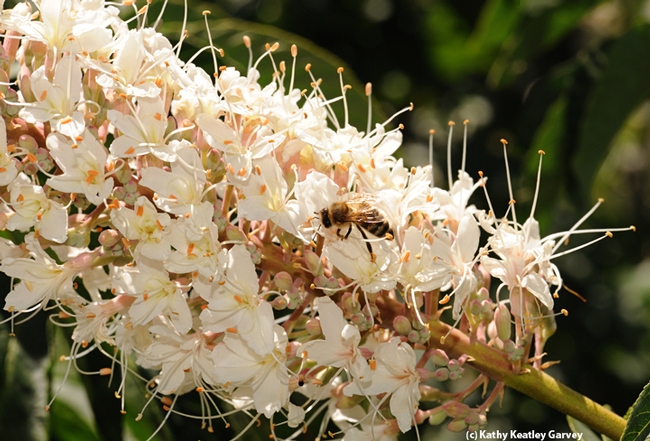 Honey bee foraging last May on a California buckeye, which is poisonous to honey bees. (Photo by Kathy Keatley Garvey) 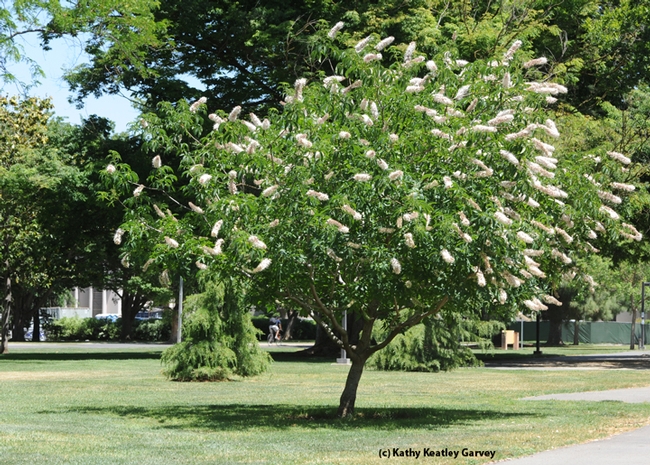