Debra Jamison, state regent of the California State Society of the Daughters of the American Revolution. loves bees. So when it came time to select a fundraising project, she knew what she wanted to do.

Jamison adopted the motto, “Bees are at the heart of our existence” and vowed to support honey bee research and enhance honey bee environments to help the beleaguered bees.

Jamison, whose first name means “bee” in Hebrew, says she's had a lifelong “love and respect for bees.” Her project? She chose to help bee research at the Harry H. Laidlaw Jr. Honey Bee Research Facility on Bee Biology Road at the University of California, Davis, and support the adjacent Häagen-Dazs Honey Bee Haven, owned and maintained by the UC Davis Department of Entomology and Nematology.

Last year Jamison and her fellow members of the California State Society donated $30,000 to bee scientist Brian Johnson. Then this year they gifted $15,000 to the garden, which was planted in 2009 as a year-around food resource for the Laidlaw bees and other pollinators. It also serves to create public awareness for the plight of bees, and as an educational garden, where visitors can glean ideas for their own gardens.

The check was presented at a “lunch-with-the-bees” celebration organized by the UC Davis College of Agricultural and Environmental Sciences. Some 125 DAR members, some from as far away as Chico and San Diego, dined beneath a canopy of olive trees bordering the road.

“We appreciate this more than we can say,” said Ed Lewis, professor and vice chair of the department--and whose mother belongs to DAR.

On behalf of the department, haven manager Christine Casey accepted the check from Jamison and Karen Montgomery of Modesto, the state regent's project chair. The department used some of the funds to purchase two benches. Other projects will include a shade structure in the Growers Grove section and more bee habitat. DAR plaque on a bench in the garden.
“When the state regent's project was conceived, I never imagined that honey bees would be in the serious state they are in,” Jamison told the luncheon crowd. “I could not have imagined that this amazing insect would make the cover of Time magazine, or that the California DAR would be involved in trying to do something to help the most vital insect in the animal kingdom.”

“Our 114 chapters and 15 districts have worked diligently to educate members, children, and the public about the plight of bees,” Jamison said. “This outreach has been truly outstanding. Add to that the phenomenal fundraising efforts. I truly thought that when I brought this project before the members that they might think, ‘Eeeeeuuuu, creepy insect, and weird state regent.'

Jamison singled out several DAR members for special recognition. She praised Karen Montgomery, state chair of the project and member of the Major Hugh Moss Chapter, Modesto, and committee members Susan Montgomery of the Major Hugh Moss Chapter; and Diane Groome, Carol Vercellino and Sharon Paukkert, all  of the José Maria Amador Chapter, Pleasanton. “Thank you all, from the bottom of my heart, for all of your work to raise funds for this project,” Jamison said

Jamison presented certificates of appreciation to Extension apiculturist Eric Mussen and communication specialist Kathy Keatley Garvey of the UC Davis Department of Entomology and Nematology for their work in helping DAR with the two-year project.

"Bee Patriotic” rally towels decorated each table. Last year Jamison's rally towels were lettered with “Bee-lieve in the Power of DAR." All those attending the March 28th luncheon received a “I Bee-long to DAR” recyclable grocery bag.

The crowd toured the haven and ended the day with hearing bee presentations in the Laidlaw facility conference room.

Mussen urged the DAR members to plant for bees, especially plants that normally bloom in late summer and fall, or delay plantings so that they result in late summer/fall blossoms.  Good plant lists, he said, can be found on the UC Davis Entomology and Nematology's bee biology website (see Honey Bees), and on the Xerces website,  under “Pollinator Conservation Resource Center.”

Mussen also warned that simply because certain pesticides are labeled for use in organic gardening does not mean that they are less dangerous for non-target insects, particularly pollinators.  Also, insecticides that are watered into the soil and move from the roots, systemically throughout the plants, are secreted in the nectar and pollens when the treated plants bloom.

“We are just studying certain mixes of fungicides, insect growth regulators, and newer adjuvants that can cause serious damage to honey bee brood, even though that information is not on the labels,” Mussen said.

In thanking the DAR members Johnson said the $30,000 will cover a two-year period of graduate student research. His graduate student, Gerard Smith, researches the effect of pesticide exposure in the field on honey bee foraging behavior, and graduate student Cameron Jasper studies the genetic basis of division of labor in honey bees.

The haven is open from dawn to dusk every day. Admission is free. To commemorate National Public Gardens Day, a special event (free) will take place from 5:30 to 7 p.m. on Friday, May 9. It will include a guide tour at 6 p.m. and a give-away of sunflower seeds (while they last). 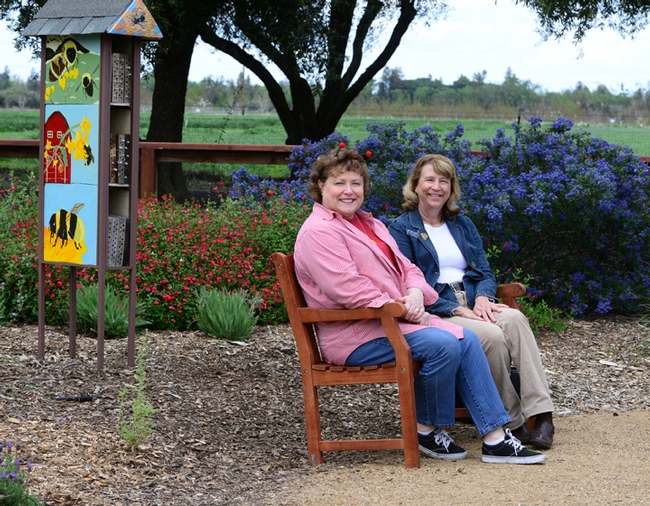 Debra Jamison (left), state regent, and Gayle Mooney, state treasurer, share a bench that the California State Society of the Daughters of the American Revolution purchased for the UC Davis bee garden. 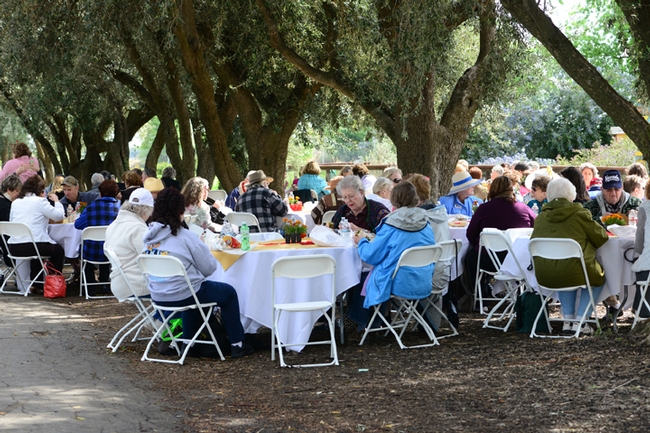 DAR members celebrating the bees beneath the olive trees on Bee Biology Road.
Tags: bee research (5), Daughters of the American Revolution (3), Debra Jamison (2), Haagen-Dazs Honey Bee Haven (90)
Comments: 2
Comments:
by Pauline J Pedigo
on April 20, 2014 at 5:13 AM
I really enjoyed your article on "bees". Over the years I've missed the large numbers of bees that used to be in my vegetable garden especially, and around my yard in general. Since becoming a Master Gardener, I have learned to be more proactive when it comes to plant selections and by fre- quently letting some of my vegetables go to seed. Also to set out water for my bees. Just a few adjustments can make such a difference.
So, "thank you" Daughters of the American Revolution for the wonderful work you are doing for the bees and especially for your most generous donation to UC Davis.
by Kathy Keatley Garvey
on April 21, 2014 at 9:30 AM
Thank you, Pauline!
Leave a Reply: