In some respects, the pterophorid plume moth is fit to a 'T.'

"The T-square shape is classic," says butterfly expert Art Shapiro, distinguished professor of evolution and ecology at the University of California, Davis.

"They always sit with their wings stuck out to the side like that," says Lynn Kimsey, director of the Bohart Museum of Entomology and professor of entomology at UC Davis.

At rest, the plume moth (famlly Pterophoridae) holds its slender wings at right angles to body, giving it a T-shaped profile.

In his book, California Insects, UC Berkeley entomologist Jerry Powell explains why they're called plume moths..."because the forewings are deeply notched and the hindwings are divided into three linear parts, each with long scale fringes. When perched, the insects roll the forewings around the folded hindwing plumes, resulting in peculiar sticklike or craneflylike appearance, unlike any other moth."

Most are noctural and are attracted to lights, Powell adds.

Scientists report some 159 described species in North America alone and more than 30 in California.

In their larval stages, some plume moths are beneficial as biological control agents. And some are pests, such as the artichoke plume moth,  the geranium plume moth and the snapdragon plume moth.

When you see them resting on a plant, however, the adults look a little like those wind turbines that stretch out in the hills of Rio Vista, Solano County. 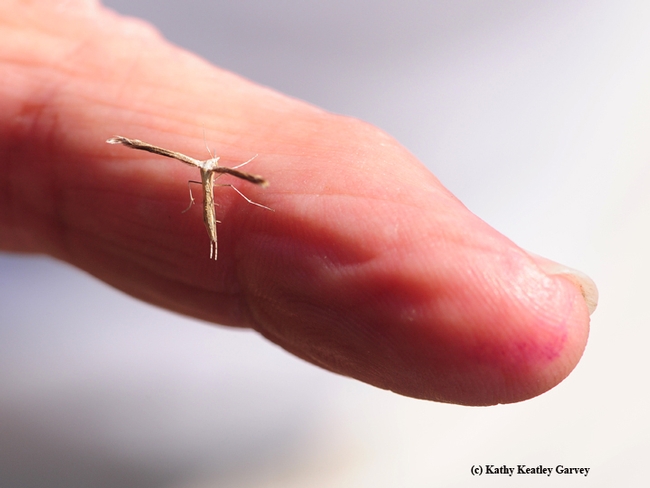 The plume moth is tiny. It's shown here on the finger of native pollinator specialist Robbin Thorp, emeritus professor of entomology at UC Davis. (Photo by Kathy Keatley Garvey) 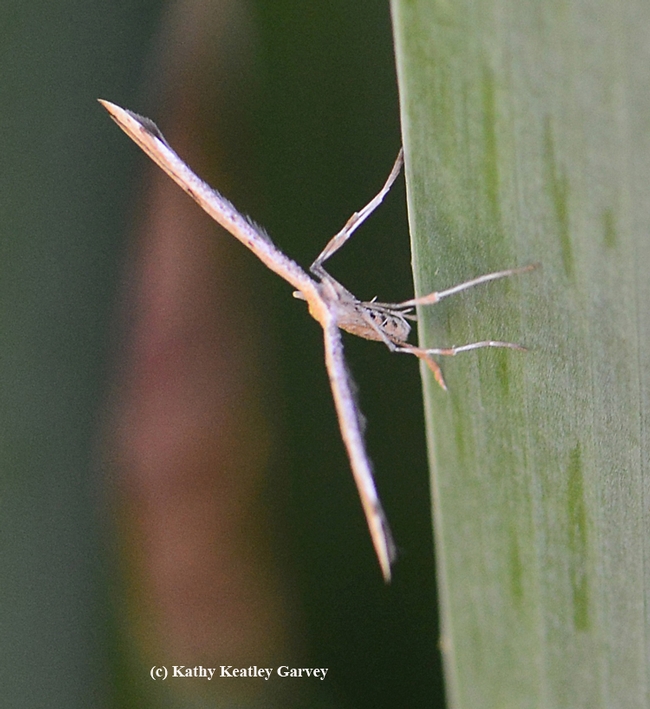