It's National Pollinator Week, and what a perfect time to welcome native pollinator specialist Neal Williams to the UC Davis Department of Entomology faculty.

He's actually no stranger to UC Davis. He's been collaborating with researchers at the Harry H. Laidlaw Jr. Honey Bee Research Facility since 2001.

The assistant professor joins us from the Department of Biology, Byrn Mawr College in Byrn Mawr, Pa.  Before that he served as a postdoctoral researcher at Princeton. You can read all about him here.

From that page,  there's a link to a pamphlet that he and Rachael Winfree of Rutgers wrote on the benefits of native bees.  You can download it free.  Although it's targeted for Pennsylvania and New Jersey farmers, the information is useful nationwide. You'll learn:

Most folks think that the common Western honey bee is native to North America. It isn't. English settlers brought  Apis mellifera to the American colonies in about 1622, according to the UC Cooperative Extension pamphlet, "Beekeeping in America," published in 1987 by the UC Division of Agriculture and Natural Resources and authored by a group of UC Davis bee specialists headed by Harry H. Laidlaw Jr. The Native Americans referred to the honey bee as "the white man's fly."

By the way, in the Williams-Winfree pamphlet, you'll find a chart indicating that the honey bee's sociality is "eusocial" and its foraging habit is "broad generalist."

And what does "euscocial" mean?

"Eusocial means the species lives in colonies with a reproductive queen and sterile workers who are her daughters," Williams and Winfree write. "All bees in the colony communicate and cooperate in caring for the brood."

Generalists? Generalist bee species "visit a large variety of plants and crops, in contract to 'specialist' bee species, which forage on a restricted group of plants," the authors explain.

It's a good read. 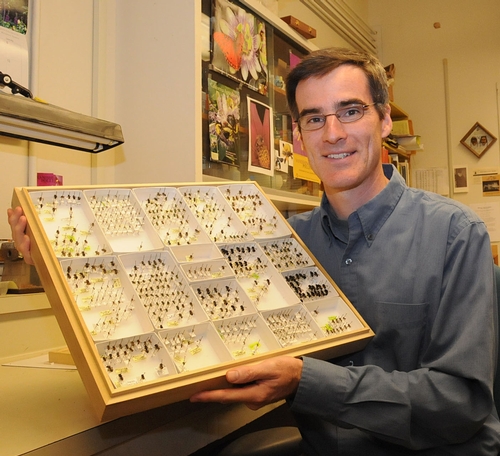 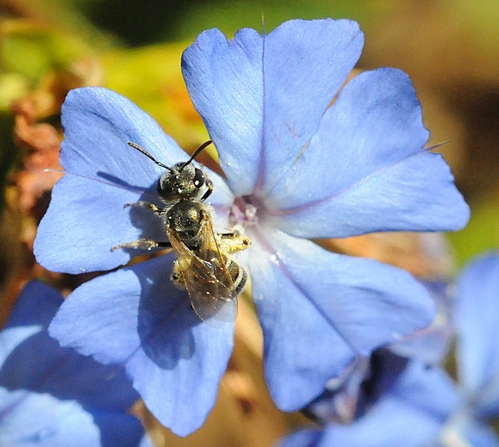 Sweat Bee
THIS INSECT is a female sweat bee, Halictus tripartitus. It is sometimes mistaken for a honey bee. The sweat bee, however, is a native, and the common honey bee or Western honey bee, is not. (Photo by Kathy Keatley Garvey)
Tags: native pollinator specialist (2), Neal Williams (69), UC Davis Department of Entomology (97)
Comments: 0
No Comments Posted.
Leave a Reply: