Handful of mosquitoes, Culex tarsalis, representing a day's catch in Coachella Valley in 1995.
DAVIS--There aren't many medical entomologists who have done what William “Bill” Reisen has done or what he will do.

Internationally known for his mosquito research and publications spanning more than four decades, Bill Reisen officially retired in July from the University of California, Davis, but mosquitoes shouldn't breathe a collective sigh of relief and go about their blood-sucking business.

Reisen, now a professor emeritus with the Department of Pathology, Microbiology and Immunology (PMI), School of Veterinary Medicine, vows to continue his mosquito research; manage the vector-borne disease surveillance diagnostics lab; advise graduate students in the School of Veterinary Medicine; mentor several new PMI faculty members; direct the Center for Vectorborne Diseases (CVEC) and edit the Journal of Medical Entomology. In between, he and his wife Norma will travel throughout the United States and Europe and to their mango farm in the Philippines.

And along the way, he'll probably encounter the 10 species mosquitoes that he developed a close and personal relationship with--“skeeters” that transmit diseases such as malaria, yellow fever, encephalitis and West Nile virus.

While other people count sheep to go to sleep, Reisen probably counts mosquitoes at his current or former research sites: Bill Reisen has taught many students about mosquitoes. (Photo by Kathy Keatley Garvey)
"Bill Reisen is an international leader in mosquito ecology and arbovirus epidemiology,” said Professor Thomas Scott of the UC Davis Department of Entomology and Nematology and a worldwide expert on the dengue mosquito. “His contributions to his field of study are stunning.  His prolific, detailed field and laboratory studies have reshaped the way we think about mosquito-borne pathogen transmission dynamics.  He has greatly improved disease prevention programs.”

“And,” Scott added, “he is a genuinely good person.  For those of us fortunate enough to have worked with him, Bill is recognized for the exceptional rigor of his science and uniquely high quality of his character."

Colleague Bruce Eldridge, emeritus professor of entomology at UC Davis, described Reisen as “the hardest working and most dedicated entomologist I have ever had the pleasure of working with.  Nearly everything he does has a definite purpose, and the results of his research have improved substantially our ability to protect people from vectorborne diseases both here in California and elsewhere in the world.”

“He has also instilled these principles of hard work and concentration on important subjects to study in a long list of graduate students, post-doctoral researchers, and other visiting scientists. People go to Bill all the time for advice and other kinds of help.  He never says no. He is a remarkable individual, and I know he won't quit doing the things he does just because he is retiring.” Bill Reisen working in Pakistan.
Reisen is the newly selected editor-in-chief of the Journal of Medical Entomology, published by Entomological Society of America (ESA). He had earlier served as a co-editor from 1988 to 2000 and subject editor since 2000.  The journal, published bimonthly, focuses on all phases of medical and veterinary entomology and acarology, including the systematics and biology of insects, acarines (mites and ticks), and other arthropods of public health and veterinary significance. In addition, Reisen has served as a member of the editorial board of the Journal of Science and Climatic Change, since 2010 and Vectorborne and Zoonotic Diseases since its inception.

Young Bill began his academic career as an undergraduate in entomology at the University of Delaware in 1963 and as a research assistant with Clemson University in 1967, monitoring organochloride insecticide residues in fish and aquatic insects. As a teaching assistant at Clemson, he taught animal ecology in 1968 and continued his research on stream ecology and fish-feeding behavior.

Reisen served as a captain in the U.S. Air Force from 1969 to 1971. He was assigned to the 5th Epidemiological Flight, Manila and 1st Medical Service Wing, Clark Air Base,  Republic of the Philippines. His duties included vector-borne disease surveillance and control programs on USAF Bases in Pacific Air Command, which took him on  temporary duty to Japan, Taiwan, Korea, Okinawa, Thailand, Guam and Hawaii.

Reisen resumed his academic career from 1971 to 1974 when he taught entomology, zoology, ecology and parasitology courses as a teaching assistant at the University of Oklahoma. He then worked as a research associate from 1974 to 1975 at the University of Maryland School of Medicine, where he did research on a malaria mosquito, Anopheles stephensi, and assisted David Clyde during the first malaria vaccine trials in humans.

In 1975 Reisen was assigned to the University of Maryland School of Medicine's Pakistan Medical Research Center in Lahore, Pakistan, where he served as an assistant professor of international medicine from 1975 to 1980 and headed the Ecology Department. His research involved population ecology and the bionomics of Pakistani mosquitoes and their relation to pathogen transmission and field trials related to genetic control of mosquitoes.

Reisen moved to California in 1980 to become research entomologist and director of the Arbovirus Field Station of the UC Berkeley School of Public Health in Bakersfield. “I worked on population ecology, bionomics, genetics and vector competence of Culex tarsalis in relation to arbovirus ecology and control in California until 1995,” he said. The program later transferred to the UC Davis School of Veterinary Medicine in 1996 and CVEC was born. Bill Reisen with his wife, Norma (right) and PMI department chair Dori Borjesson. (Photo by Kathy Keatley Garvey)
Reisen remained in Bakersfield until 2005 when he moved to the UC Davis campus and later became director of CVEC in September 2009 and a PMI adjunct professor in 2005.  With the Arbovirus Research Program, he continues to focus his work not only on mosquitoes but people. He has supervised up to two postdoctoral students, four Ph.D. students, one associate specialist entomologist, a computer programmer, four staff research associates, two laboratory assistants and two undergraduate student assistants.

“My career can be divided into three phases: (1) education/learning, (2) field research and (3) advising and mentoring,” Reisen said.  “Graduate training at Clemson and Oklahoma and my U.S. Air Force assignments in southeast Asia and my position in Pakistan provided a great introduction to how to do field studies and work in remote areas with minimal equipment and support.  This training was applied during the 25 years in Bakersfield where we did everything from genetic control trials to host and vector competence studies with several arboviruses.”

“This training and work experience managing integrated field research programs gave me insight on how to mentor graduate students and new faculty, the final phase of my career,” Reisen noted. “The latter experience expanded our research breadth and improved our program immeasurably as I got to know some very bright and engaging students.  Throughout my career I was very fortunate to be supported by excellent laboratory and field staff which formed the cornerstone of our NIH-funded research programs.”

Highly honored by his peers, Reisen has received national and international honors that include: Bill Reisen greets Sarah Wheeler's 7-month-old baby, Etta Palmer, at a retirement party. (Photo by Kathy Keatley Garvey)
Reisen is a past president of the Society for Vector Ecology and chaired the ESA's D Section and the Publications Council.  He also chaired a number of subcommittees, including the Disease Control Subcommittee, of the California Mosquito and Vector Control Association, and headed the Vector Control Advisory Committee of the California Department of Health Services (CDHC), among other leadership activities.

Chris Barker, now an assistant adjunct professor with PMI and CVEC, said that Reisen is “known to virtually everyone who has spent much time studying mosquitoes or the viruses they transmit.”

“Bill has had a very productive and well-documented career represented in his 297 peer-reviewed scientific papers,” Barker said. “His lasting enthusiasm for his work, good humor, and uncommon humility have been an inspiration to all of his colleagues, especially the students and staff who have had the good fortune to be a part of his research program. One unique aspect of Bill's career is that he spent over 30 years in the field and at the lab bench in contact with mosquitoes almost daily, which is increasingly rare in today's world of digital data collection. It is safe to say that Bill will not quit upon retirement, and his intellectual input and wealth of experience will continue to be valued for years to come.”

Sarah Wheeler participated in the “West Nile virus period” of Reisen's career-- first as a technician, then as a PhD student, and finally, as a post-doctoral scholar. “During the West Nile period Bill facilitated and conducted a body of work leading to the understanding of West Nile virus transmission and overwintering in California. Bill's dedication to the field of arbovirology and fierce work ethic inspired me to follow in his footsteps, and along the way he shaped my approach to science through his lead by example style. Bill has been a fabulous mentor and I am unendingly grateful I took his original job offer that sent me out into the middle of nowhere, but opened upon the world of arbovirology.”

Said Reisen: “Although we did spend a lot of time collecting mosquitoes, we also had a large bird program where we collected, bled and tested more than 85,000 wild bird sera for arbovirus infection and did a host of experimental infection studies with birds ranging from house finch nestlings to adult mallard ducks and black-crowned night herons.”

Robert Washino, emeritus professor and former chair of the UC Davis Department of Entomology and a former administrator with the UC Davis College of Agricultural and Environmental Sciences, lauded Reisen's career.

“Bill has had a very colorful career in medical entomology,” said Washino.  He remembers visiting his laboratory at the School of Medicine, Lahore, Pakistan “in another lifetime.”

“Bill will forever be remembered as the continuing lead investigator of the important W. C. Reeves, UC Berkeley arbovirus program in California,” Washino said. He praised Reisen's collaborative work with the California Department of Public Health and local regulatory agencies of the Mosquito and Vector Control Association of California.

As for Bill Reisen, “the retiree,” he says he's looking forward to continuing his myriad of mosquito-related activities “to finish up my career and help protect the health of the citizens of California.”

“My final objective,” he said, in typical Reisen humor, “is to learn to play bogey golf.” 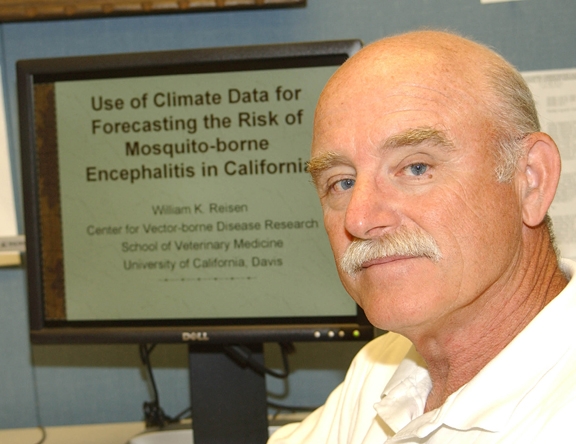 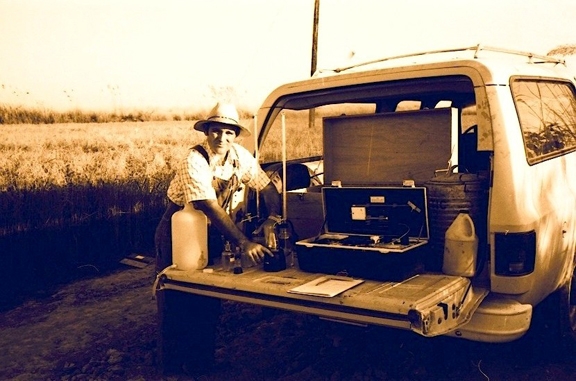