Bug Squad
sitenum=63
Happenings in the insect world
About Those Sleepovers...

We're receiving lots of inquiries about sleepovers ever since we began posting images of male longhorned bees, Melissodes agilis, sleeping on our lavender.

While the females sleep in their underground nests, the males cluster on stems. No, they don't have pillow fights or nightcaps but they do wiggle around a lot until they get comfortable.

Now the boys have moved from their favorite spot on the lavender (vertical sleepover) to the guara (horizontal sleepover). We suspect this may be due to several reasons: (1) The presence of three praying mantids in the lavender (2)  the lavender is fading while the guara is flourishing and (3) the guara offers a definite height advantage, which may deter a few predators (but not birds).

Nevertheless, the boys start arriving for their nightly sleepover around 5 p.m. and don't budge until around 7 p.m., sometimes as late as 9 or 10.

One reader asked some interesting questions.

"There is a nightly cluster of boys on an aster stem in my front yard and I wanted to find out more about them. In particular, do they/can they/will they sting?"

No, boys don't sting--just the girls. As native pollinator specialist Robbin Thorp, emeritus professor of entomology at UC Davis, explains: "Boy bees cannot sting.  They lack a stinger which is a modified ovipositor in their wasp ancestors.  Occasionally a girl bee may spend the night out if she is caught by sudden drop in temperature.  Usually she will not be part of a group sleep over.  So don't attempt to handle unless you are confident you can tell boy bees from girl bees or they are too sleepy to defend themselves."

Says Thorp: "Boy sleeping aggregations are based on a suitable perch and not related to where females are nesting, but probably no more than 100 yards from the nearest female nest.  Females nest in the ground and have rather distinctive round holes about the diameter of a pencil or slightly smaller, sometimes with small piles of dirt around them looking like mini-volcanos.  The holes may be widely separated or clustered together depending on the species, but each female digs her own burrow."

Of course, not all slumbering bees in this area are Melissodes agilis,  as Thorp points out. Some may be other species of the genus Melissodes and some may belong to the closely related Svastra obliqua.

Says Thorp: "The boys usually settle in as the light dims in the evening.  Cool, and drizzly conditions may modify bed time.  Each establishes his own spot, so there may be some jostling for position initially."

We've noticed that, too. We've also noticed that the early morning risers--the carpenter bees, bumble bees, honey bees and syrphid flies--work around the slumbering Melissodes agilis. All that buzzing must sound like the human version of a chainsaw. "Will ya shaddup, already? Can't you see we're trying to sleep?"

Once the boys awaken, though, watch out! They'll dive-bomb the pollinators or any critter working or resting on "their" flowers.  They're very territorial and determined to save the food source for the females of their species. The butterflies, including the Western tiger swallowtail, anise swallowtail, Gulf Fritillary and cabbage whites, don't linger when the boys target them.

And speaking of California bees, we're eagerly awaiting the arrival of the book, California Blooms and Bees: an Identification Guide for Gardeners and Naturalists. It's co-authored by research entomologist/professor Gordon Frankie of UC Berkeley; Thorp (who received his doctorate from UC Berkeley); and their UC Berkeley affiliates, photographer/entomologist Rollin Coville and floral/herbarium curator Barbara Ertter.

More than 1600 species of undomesticated bees call California their home. The authors focus on 22 of the most common genera and the flowers they frequent. 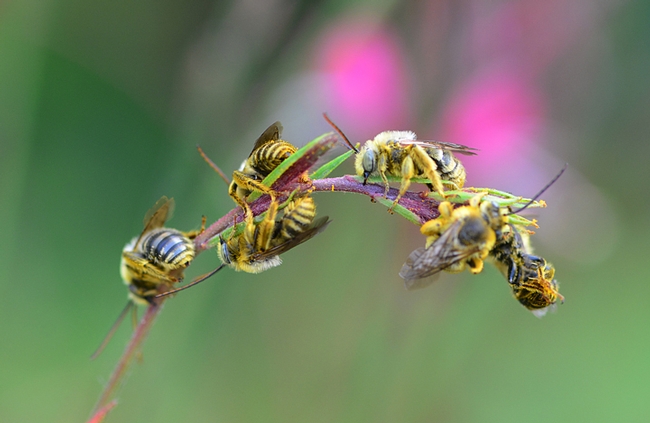 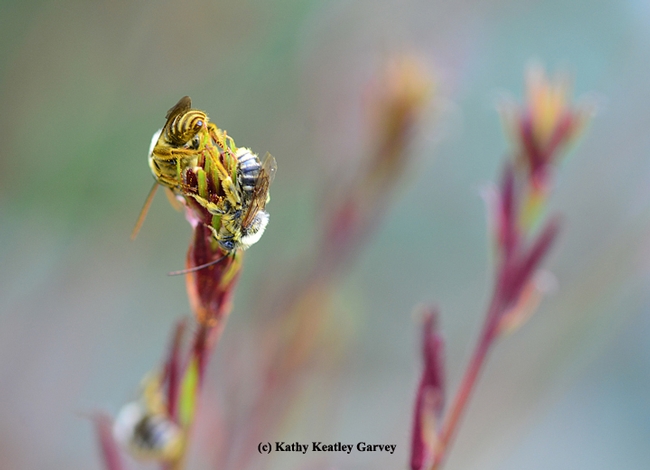 Not every stem is taken and not all the males cluster six or seven to a stem. These two appear to want space. (Photo by Kathy Keatley Garvey) 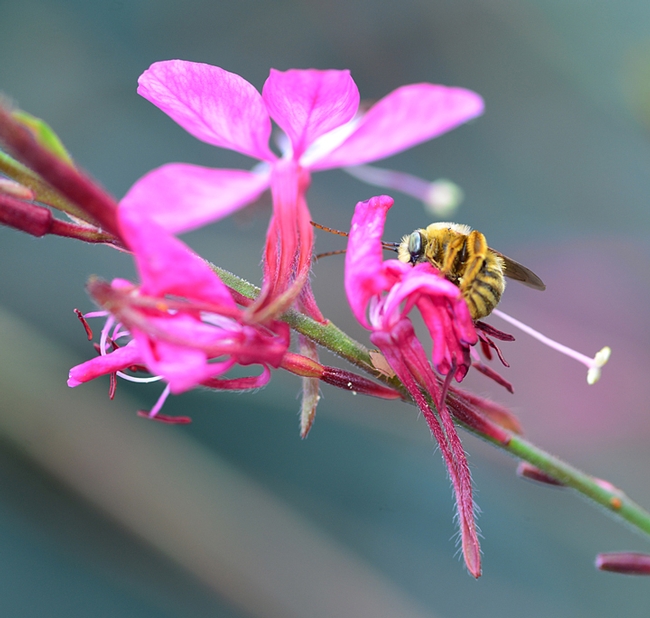 I've been watching during daylight trying to see if I can see the girls going into their nests, but have had no luck. Though the nearby patch of ground is all covered in grass and clover, I'll take a closer look to see if i can spot any holes (and it's good to know there would be more than one!)

The boys seem to increase in number daily and we're now up to a clump of 30 on the single aster stalk. I'm hoping no anti-bee/sting-scared neighbors notice them as I can't protect them in their current location. In the meantime though, they're fascinating to watch - both in their lazy, sleepy ways, as well as their daytime dive bombing.

Thank you again for the helpful information (I was surprised to find how little there is about them on the internet), as well as the beautiful pictures!
by lisa
on July 29, 2014 at 10:18 PM
I was just reading the bee lab page and read that male bees (of all species) can't sting!! I never knew this! And to think of all the time I've spent giving downed bumbles sugar water and taking them from flower to flower to flower (after they've used up all their energy bonking into other male bumbles instead of eating) all while attempting to make sure they stay on the leaf/object i'm carrying and don't climb on (potentially sting) my hand. That's so neat!
by Ed Kendryna
on August 12, 2017 at 2:47 PM
I've been wondering about the black bees in my backyard for a couple of years. They love the corn, squash ,and Joe Pye weed.I've also have seen them clustered on dill flowers over night. They are black with 2 white bars on their abdomen.
Leave a Reply: