Entomology & Nematology News
sitenum=270
UC News about Entomology and Nematology.
Campus Buzzway, a Wildflower Walkway, Is All the Buzz at UC Davis
Published on: September 15, 2009 Honey bee in lupine. (Photo courtesy of Christine Hanrahan)
DAVIS—The "Queen Bee Blend" of wildflowers that will be planted this fall on The Campus Buzzway on Bee Biology Road, University of California, Davis, is fit for a queen--not to mention her offspring.

Compliments of Häagen-Dazs, the wildflowers will be on a quarter-acre site adjacent to the soon-to-be-implemented Häagen-Dazs Honey Bee Haven, near the Harry H. Laidlaw Jr. Honey Bee Research Facility.

The Campus Buzzway, coordinated by the Department of Entomology and the California Center for Urban Horticulture, will begin blooming in the spring.

The Häagen-Dazs Honey Bee Haven, a half-acre bee friendly garden scheduled to be planted in mid-October, is designed to serve as a year-around food source for honey bees, raise public awareness about the plight of honey bees and encourage visitors to plant bee-friendly gardens of their own, said entomologist Lynn Kimsey, professor and vice chair of the Department of Entomology and director of the Bohart Museum of Entomology.

“The Campus Buzzway will be a fabulous addition to the honey bee garden already under construction at our Bee Biology facility,” Kimsey said. “Both will greatly benefit our colonies and make terrific teaching opportunities.”

Dave Fujino, executive director of the California Center for Urban Horticulture, said the Campus Buzzway will boast year-round blooms and vibrant colors.  “The Buzzway will transform an empty field into something beautiful and functional,” he said. “Most importantly, the flower mix will have a positive impact on the health and wellness of our local pollinator populations.”

Fujino said that the Campus Buzzway, spanning approximately 9000 square feet, will include wildflower liners and weed barriers to “provide a uniform, weed-free field of flowers for next spring.”

The Campus Buzzway was part of a national campaign, “A World Without Bees,” that Häagen-Dazs launched on college campuses in April. Students at 12 major colleges, including UC Davis, sampled the premier ice cream and voted on their favorite flower blend. The winner: the Queen Bee Blend.

Häagen-Dazs is in its second year of a national campaign to raise funds for honey bee research at UC Davis and Penn State University.  Part of the brand's donations to UC Davis are being used to create the Haagen-Dazs Honey Bee Haven and the Campus Buzzway.

Honey bees are responsible for the pollination of more than 100 crops in the United States, including fruits, vegetables, nut and seeds, said Extension Apiculturist Eric Mussen of the UC Davis Department of Entomology faculty and a member of the Häagen-Dazs scientific board. Nearly half of all Häagen-Dazs flavors depend on bee pollination.

Sibbett is a principal with the Sibbett Group; Baker is a senior landscape architect with RRM Design Group; Brainard is an independent museum consultant; and Kurotaki is an exhibit designer who works for RRM Design Group.

Incorporated into each of the four sections are gathering spaces that serve as orientation points for guided tours, facilitated programs and ‘chat time' with beekeepers and entomologists,” the team explained. Identification labels will help visitors know more about the plants, or what they can plant in their own yards.

Häagen-Dazs ice cream committed $125,000 to the UC Davis Department of Entomology for the garden project. This encompasses site planning, preparation and the design competition.

Said design competition coordinator Melissa “Missy” Borel, program manager for the California Center for Urban Horticulture:  “We'll not only be providing a pollen and nectar source for the millions of bees on Bee Biology Road, but we will also be demonstrating the beauty and value of pollinator gardens. My hope is that it will inspire everyone to plant for pollinators!”

A public opening of the Häagen-Dazs Honey Bee Haven and Campus Buzzway is tentatively scheduled in the fall of 2010. 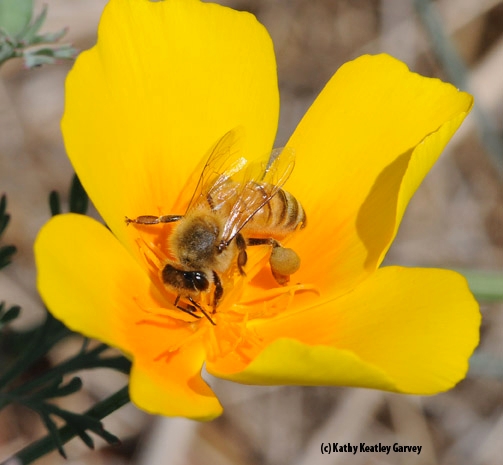