Close-up view of head of sculpture at the Häagen-Dazs Honey Bee Haven.
DAVIS--Its title is a play on words, but the sculpture is a work of art.

“I like to play with words,” said noted artist Donna Billick who created “Miss Bee Haven,” a six-foot-long honey bee sculpture for the Häagen-Dazs Honey Bee Haven at the University of California, Davis.

“The bee sculpture is beautiful and provides the perfect focal point for the garden,” said entomologist Lynn Kimsey, director of the Bohart Museum of Entomology and professor and former chair of the UC Davis Department of Entomology who oversees the garden.  “On top of that it accurately represents a worker bee and provides an educational component as well as an aesthetic one.”

“The Wells-Fargo honey bee sculpture is a wonderful educational tool in the garden,” said Melissa “Missy” Borel, program manager of the California Center for Urban Horticulture who has helped develop the garden since its inception. “Visitors can get up close and personal with the bee, even touch the pollen baskets on her legs.  We're fortunate to have such a beautiful model as a showcase to the public.”

Kimsey, who is master-planning the grand opening celebration of the garden, set from 10 a.m. to 2 p.m. on Saturday, Sept. 11, said the Häagen-Dazs Honey Bee Haven “is sure to become a campus destination.” Translucent bee wings, made of fiberglass
The key goals of the haven, Kimsey said, are to provide a year-around food source for the Laidlaw bees and other pollinators, to raise public awareness about the plight of honey bees, and to encourage visitors to plant bee-friendly gardens of their own.

The bee, shaded by an almond tree, stands on a pedestal/bench decorated with ceramic art tiles, the work of the UC Davis Art/Science Fusion Program. Billick, who worked on the bee from her Davis studio, Billick Rock Art, is the co-founder and co-director of the UC Davis Art/Science Fusion Program. Billick founded the program in 2006 with entomologist-artist Diane Ullman, professor and former chair of the UC Davis Department of Entomology and now associate dean for Undergraduate Academic Programs, College of Agricultural and Environmental Sciences. Miss Bee Haven, placed in the garden in June, is no lightweight. Anchored with 200 pounds of cement and with six bronze legs drilled into the pedestal, this worker bee is destined to stay put—unlike the six million bees that forage from the 110 hives at the nearby Laidlaw facility.

“This is a surprisingly accurate rendition for a highly attractive work of art,” Mussen said. “I can gather a group around it and point out the special anatomical features that make the honey bee such an invaluable pollinator of our food crops. This bee and all the other magnificent ceramic works of art around our building, on-campus structures, and planned-for future structures demonstrate the enormous, highly visible value of the Art/Science Fusion Program.”

Billick used lost wax bronze casting to craft the six legs, which extend from the thorax to rest on a ceramic “purple dome” aster, fabricated by Davis artist Sarah Rizzo.  The purple dome aster is among the flowers in the garden.

Billick created the double set of translucent wings with three sheets of fiberglass. The result: wings that are fragile-looking and true to life, but strong.

“During this entire process, I developed a real in-depth relationship with honey bees,” Billick said. For inspiration and detail, she visited the apiary in back of the Laidlaw facility, read about the functions of bees, and held the thoughts close. “It was not about expressing anything other than the beeness. I have a lot of respect for bees.”

“It was fun and satisfying to do,” the rock artist added.”I learned a ton.”

Billick is now creating a bee sculpture called “Swarmed,” which she calls a “wild-card idea”  gleaned from the making of Miss Bee Haven. The piece, being finished for an art show in San Francisco, features 30 suspended bees.

A 35-year artist and an alumna of UC Davis, Billick toyed with a scientific career before opting for a career that fuses art with science. She received her bachelor of science degree in genetics in 1973 and her master's degree in fine arts in 1977, studying art with such masters as Bob Arneson, Roy De Forest, Wayne Thiebaud and Manuel Neri.

Billick traces her interest in an art career to the mid-1970s when then Gov. Jerry Brown supported the arts and offered the necessary resources to encourage the growth of art. He reorganized the California Arts Council, boosting its funding by 1300 percent.

The mid-1990s is when Billick and Ullman began teaching classes that fused art with science; those classes led to the formation of the UC Davis Art/Science Fusion Program.

Also in Davis, Billick created the whimsical Dancing Pigs sculpture and the Cow Fountain, both   in the Marketplace Shopping Center on Russell Boulevard; the Mediation sculpture at Central Park Gardens; and the Frawns for Life near the West Area Pond.

She maintains a compound in Baja, where she teaches three workshops a year called "Heaven on Earth."

Miss Bee Haven also promises to provide heaven on earth--as a draw to admire the honey bee and as a sculpture to study the art form.

“Bees are very engaging,” Billick said. “I have a strong love for the work they do and how they go about doing it.” 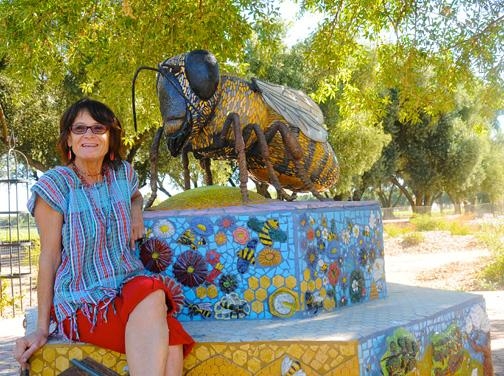