Bryson toured the research facility and the half-acre Häagen-Dazs Honey Bee Haven, a bee friendly demonstration garden on Bee Biology Road. Beekeeper Brian Fishback of Wilton, a Laidlaw volunteer and past president of the Sacramento Area Beekeepers' Association and a member of the California State Beekeepers' Association, hosted her.

Bryson, who at age 19 was crowned American Honey Bee Queen at the January 2011 convention of the American Beekeeping Federation in Galveston, Texas, serves as a spokesperson for the beekeeping and honey industry. By the time her reign ends in January 2012, she will have visited approximately 25 states. She marveled at the Häagen-Dazs Honey Bee Haven, which includes ornamental, fruit, vegetable and nut plantings, as well as the art work from the UC Davis Art/Science Fusion Program.

“It's great that the American Beekeeping Association (ABF) annually sponsors the queen/princess competition,” Fishback said.. “They do so much for the beekeeping industry.” The purpose of the honey queen program is to educate the public about the beekeeping and hone industries, Bryson said. The queen and princess travel throughout the United States during their reign year and talk about the importance of honey bees, focusing on crop pollination and honey.  They discuss why honey is a healthy substitute for sugar, and why it's excellent in baked products.

Bryson earlier was selected the 2010 Pennsylvania State Honey Bee Queen.  Allison Adams of  Plano, Texas, serves as the 2011 princess and is also a beekeeper.

Bryson, daughter of Tom and Linda Bryson of Chambersburg, Pa., is a junior and honor student at Hagerstown (Md.) Community College, where she is double majoring in English and forensic science.  Her career goal is to work in a crime lab, perhaps for the Secret Service.

Active in 4-H for 10 years, she was named the 2010 4-H'er of the Year in Franklin County, Pa. She continues as a leader in the 4-H youth development program.

No stranger to bees, Bryson began beekeeping four years ago. She and her sister, Rachel, now tend five hives of Italian bees on their family's three-acre farm. The bees pollinate the Brysons'  apples, pears, strawberries, raspberries and blueberries.

Bryson, who enjoys sewing, reading and square dancing in her leisure time, has two brothers and a sister.  Their mother is a teacher and their father, a mechanical engineer.

This was her second trip to California; Bryson was here in 2008 for the ABF convention. 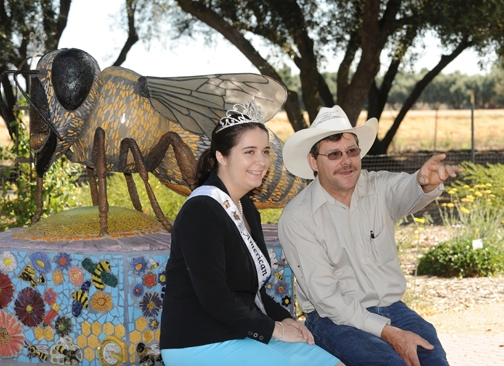