Entomology & Nematology News
sitenum=270
UC News about Entomology and Nematology.
Art Is Where the Community Is; Blending Science With Art in the Häagen-Dazs Honey Bee Haven
Published on: July 15, 2010 Entomologist-artist Diane Ullman admires the work of Aleta Ballinger, 8, of Davis. Ullman and Donna Billick direct the UC Davis Art/Science Fusion Program. (Photo by Kathy Keatley Garvey)
DAVIS--If it takes a village to raise a child, then the art at the Häagen-Dazs Honey Bee Haven at the Harry H. Laidlaw Jr. Honey Bee Research Facility at the University of California, Davis is a child of the community and the campus.

The ceramic art work being installed at the half-acre bee friendly garden on Bee Biology Road is the work of not only undergraduates in the UC Davis Art/Science Fusion Program but community residents.

“We are so inspired by the learning that happens as students from majors across the campus and community members collaborate to create beautiful and educational artwork,” said Art/Science Fusion Program co-director and co-founder Diane Ullman, an entomologist and an artist. “It is exciting to see the learning we can share extended to so many people as a result of connecting art and science in this way.”

Diane Ullman, an entomology professor-artist and associate dean for undergraduate academic programs at the College of Agricultural and Environmental Sciences, founded the Art/Science Fusion Program in 2006 with Davis-based artist Donna Billick. However, they trace the beginnings of the program back to 1997 when they began teaching art-science fusion classes on campus. Artist Donna Billick, co-founder and co-director of the UC Davis Art/Science Fusion Program, with some of the ceramic art for the .Häagen-Dazs Honey Bee Haven. (Photo by Kathy Keatley Garvey)
Ullman and Billick conducted a series of “Community Nights” on campus earlier this year. The community nights drew a wide-age group, from pre-schoolers to senior citizens to entire families.

At the invitation of the UC Davis Art/Science Fusion Program, sixth graders at Korematsu Elementary School, Davis, and community members crafted flowers, pollen grains and bees for the haven.

At one recent community workshop, third-grader Aleta Ballinger, 8, of Davis, finished a handful of ceramic bees and also completed a larger ceramic of a worker bee on hexagonal cells.

Artists Carol Rogala of Folsom, wearing a “Save the Bees” t-shirt, and her friend, T. J. Lev of Sacramento, crafted flowers from clay. They recently participated in the “Bees at The Bee” art show in Sacramento.

Members of two Davis families clustered around a table to work the clay into flowers and bees and paint them.  Enthusiastically participating were children Jason Henkel, Sophia Leamy, Nicolas Leamy, and Matthew Henkel and adults Merissa Leamy, Nicolas Leamy and Barbara Friedman.

A special seminar offered by the Art/Science Fusion Program also allowed undergraduates in the Davis Honors Challenge to explore the life and importance of honey bees.  Christine Santa Maria, a UC Davis honors student majoring in biochemistry and molecular biology, finished a piece on the life cycle of bees. She included larvae, nurse bees feeding the brood, and worker bees nectaring flowers. She formed a retinue of worker bees around the queen bee.

Billick created a gigantic bee sculpture for the garden. Donors making gifts or pledges of $1000 or more by July 20 will have their nams placed on ceramic art tiles in time for the Sept. 11 opening. Their names also will be placed on the website of the Harry H. Laidlaw Jr. Honey Bee Research Facility. Pledges can be paid over five years, according to Jan Kingsbury, director of major gifts, UC Davis College of Agricultural and Environmental Sciences.

The deadline to contact her in order to have these tiles in place before the Sept. 11 opening is July 20.  "We are just about to finish the art work for this set of tiles," Kingsbury said. More sets will follow. Kingsbury can be reached at (530) 304-4327 or jkingsbury@ucdavis.edu.

The grand opening celebration of the Häagen-Dazs Honey Bee Haven will include speakers, educational information about bees and how to help them survive, children's activities and tours.

(Editor's Note: Initially, plans called for RSVPing to the opening celebration. This is no longer necessary.) 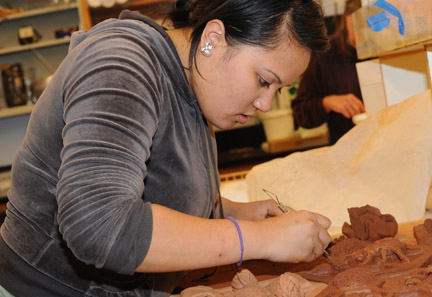 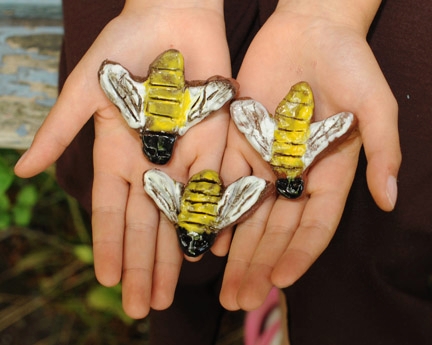 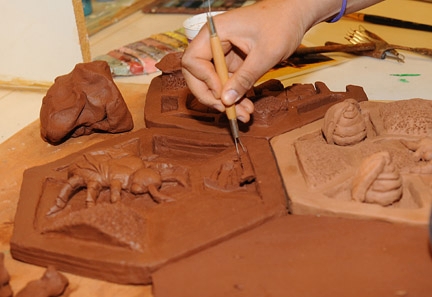 clay. Close-up of the intricate work of Christine Santa Maria. 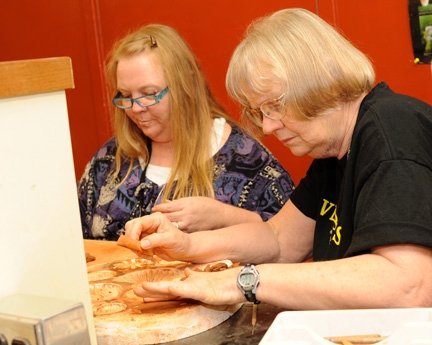