Bee on salvia (sage). (Photo by Kathy Keatley Garvey)
DAVIS—The “honey-do” list at the newly revitalized Harry Laidlaw Jr. Honey Bee Research Facility at the UC Davis Department of Entomology is now shorter, thanks to a $100,000 research donation from Häagen-Dazs to address the bee population decline.

“Honey bees are in trouble,” Leal said. “One-third of our nation's food supply depends on bee pollination, but bees are vanishing in massive numbers. This gift will help us to rebuild and revitalize our honey bee program.”  Retirements and budget cuts decimated the program during the 1990s.

Häagen-Dazs officials will launch a national campaign on Tuesday, Feb. 19 to create awareness for the plight of the honey bee. Nearly 40 percent of Häagen-Dazs brand ice cream flavors are linked to fruits and nuts pollinated by bees.

As part of the “Häagen-Dazs Loves Honey Bees” campaign, the company created a new flavor of ice cream, Vanilla Honey Bee, available starting Feb. 19; committed a total of $250,000 for bee research to UC Davis and Pennsylvania State University; formed a seven-member scientific advisory board; and launched a Web site, www.helpthehoneybees.com to offer more information on the “unstung heroes.”

Leal said that half of the gift will be used to hire a Häagen-Dazs Postdoctoral Research Fellow in honey bee biology.  “We will immediately conduct a high-profile international search and the successful candidate will work at the Laidlaw facility for one year conducting problem-solving research in honey bee biology, health and pollination issues.”

Häagen-Dazs will fund the salary, while the UC Davis Department of Entomology will provide partial matching funds to support other expenses.  Leal said the renewal will be contingent on research progress and availability of funds.

Häagen-Dazs brand manager Josh Gellert said that without honey bees, it would be “tough to source and produce” ice cream. By working with UC Davis and Penn State, “we hope to take steps toward finding ways to increase the honey bee population and educate consumers on how they can take part in helping save the honey bees.”

The Vanilla Honey Bee flavor will include a trademarked “Häagen-Dazs Loves Honey Bees” icon, as will all other flavors linked to bee pollination. A portion of the sales will be used to help the honey bees through university research.

Colony collapse disorder (CCD) is a phenomenon characterized by bees unexpectedly abandoning their hives, said apiculturist and Cooperative Extension specialist Eric Mussen of the Laidlaw facility. “Of the 2.24 million colonies in the United States, beekeepers routinely lose 20 to 25 percent annually, but CCD has increased the numbers.”

The Laidlaw teaching and research facility is considered one of the finest and oldest in the country. Active bee research began on the UC Davis campus in 1925. Today UC Davis serves as a key center of research, teaching, graduate training and extension activities in apiculture and bee biology in the UC system, Leal said.  The Chronicle of Higher Education ranks the UC Davis Department of Entomology No. 1 in the nation.

Honey bee geneticist Robert Page, former chair of the UC Davis Department of Entomology and now the founding director of the School of Life Sciences, Arizona State University, worked closely with Laidlaw. “All of us who have made our careers studying the genetics of honey bees stand on the shoulders of Harry Laidlaw,” he said. “Harry was totally dedicated to honey bee breeding and apiculture from the time he opened his first hive of bees when he was 5 years old, until he died at 96.”

The newly formed Häagen-Dazs Ice Cream Bee Board includes three UC Davis scientists:  Mussen, Cobey and Michael Parrella, professor of entomology and associate dean, College of Agricultural and Environmental Sciences.  The board will advise company officials on scientific issues; announce new research findings; and educate the public on ways to help save the honey bee.

Mussen noted that honey bees are responsible for pollinating more than 100 U. S. crops, including fruits, vegetables, nuts and seeds. California produces 99 percent of all the almonds grown in the United States. Growers need two hives per acre to pollinate the state's 700,000 acres of almonds, valued at more than $2 billion, Mussen said.

Said Parrella: “The Häagen-Dazs brand and UC Davis have a shared goal of preserving our local natural ingredients in a sustainable future, and their donation to the Laidlaw facility will help us reach our goals through advances in research and community awareness programs.”

“We're so happy that industry is recognizing the issues that the bees and beekeepers face,” Park-Burris said.  “Last month at our national beekeeping conference, we gave a standing ovation to Häagen-Dazs for stepping forward to help us. This is an example of what a business can do, and maybe more businesses will get involved.”

“It's exciting that the honey bee program at UC Davis is being rebuilt and revitalized,” Park-Burris said.

Dori Bailey, director of consumer communications for Häagen-Dazs, received the standing ovation at a UC Davis dinner on Jan. 10 when she outlined her company's support for honey bees to the American Honey Producers' Association, American Beekeeping Federation, American Association of Professional Apiculturists and the Apiary Inspectors of America.

“It was a great presentation,” said Park-Burris, who noted that the beekeepers were the first (outside the company) to sample the new Vanilla Honey Bee ice cream.  “You could really taste the honey. It's excellent.”

Beekeepers say the general public can help save the honey bees by planting a bee friendly garden; educate others about the honey bee decline; buy U.S. honey; and support research to help preserve the nation's food supply. 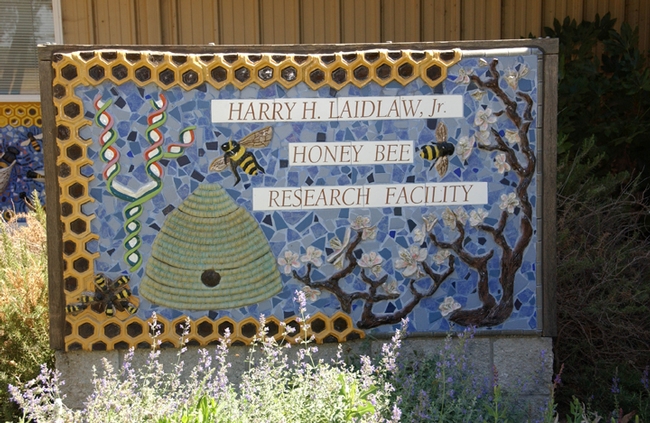