Michelle Flenniken
DAVIS—Insect virus researcher Michelle Flenniken, a postdoctoral scholar in the Department of Microbiology and Immunology at the University of California, San Francisco, is the newly selected Häagen-Dazs Postdoctoral Fellow at UC Davis.

“We're hoping that Michelle Flenniken's expertise in molecular virology will lead to understanding one of the factors contributing to colony collapse disorder and lead to strategies that increase honeybee survival,” said Lynn Kimsey, chair of the Department of Entomology and director of the Bohart Museum of Entomology.

Colony collapse disorder occurs when bees mysteriously abandon their hives, often leaving the brood (immature bees) and honey. The nation's beekeepers have reported losing from one-third to 100 percent of their bees over the last two years.

Flenniken works with insect viruses in the laboratory of professor Raul Andino at UCSF. She will continue working in the lab and also with researchers at the Harry H. Laidlaw Jr. Honey Bee Research Facility at UC Davis.

Skilled in multidisciplinary research--molecular biology, microbiology, chemistry and cell biology—Flenniken will focus on the biology of honeybee viruses, specifically the role of RNA interference (RNAi) in the honeybee antiviral immune responses, Kimsey said.

“I hypothesize that RNAi can be used as an antiviral strategy in honey bees,” Flenniken  said. She will investigate the role of the RNAi machinery in virus infection and attempt to limit virus production in the bees by priming their RNAi machinery with viral specific double-stranded RNA.  Flenniken has been identifying the viruses present in the hives of San Francisco Hobby Beekeepers and research collaborators.

“Most bees have viruses, particularly common is Kashmir bee virus,” said UC Davis apiculturist Eric Mussen. “In fact, we'd be surprised to find a bee not carrying some type of virus.”

Her parents completed a beekeeping course at Iowa State University and gifted her with the equipment, including a hat and veil, bee brush, hive tool and “a lot of good beekeeping books,” she said.

“I think bees are really interesting and look forward to learning more about them.  I am really excited about this research topic because it encompasses molecular biology, ecology, environmental science, and global food production and health. “

A native of Nevada, Iowa, Flenniken received her bachelor's degree in biology and a minor in chemistry in 1998 at the University of Iowa, Iowa City, and her doctorate  in microbiology in 2006 from Montana State University, Bozeman.  She wrote her thesis on “Protein Cage Architectures for Targeted Therapeutic and Imaging Agent Delivery.”

In 1998-2000, she served as a Peace Corps volunteer in Ghana, West Africa, where she grew a variety of tree seedlings for an agro-forestry program. She participated in a study abroad program at Lancaster (England) University in 1996-97.

Flenniken is supported by an A. P. Giannini Foundation Postdoctoral Fellowship (April 2008) for her work in RNAi. Her graduate work was supported by the Ruth L. Kirschstein National Research Service Award from the National Institutes of Health; and the Louis V. and Norma Smith Fellowship, Department of Microbiology, Montana State University.

The board advises company officials on scientific issues; announces new research findings; and educates the public on ways to help save the honey bee.

Mussen noted that honey bees are responsible for pollinating more than 100 U. S. crops, including fruits, vegetables, nuts and seeds. One-third of the American diet is pollinated by honey bees. 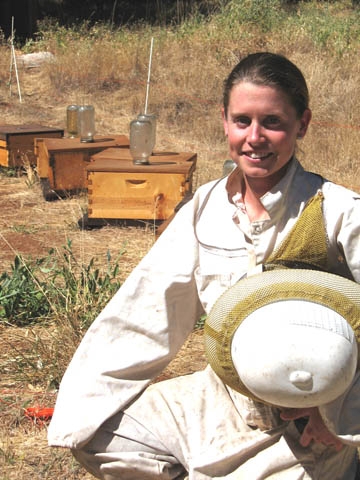