Management of 'Hoppers' that Infest Alfalfa in California's Southern Desert

The three species of Empoasca leafhoppers found in California all have a similar appearance; each is small (0.125 inches long) with bright green wedge-shaped bodies. Nymphs (immatures) also have green wedge-shaped bodies and run rapidly when disturbed. They may run forward, backward, or from side to side. Their unique movement plus their bright color and shape distinguishes them from Lygus bug nymphs and other slower-moving insects like aphids. Other green leafhoppers may be present in alfalfa, but they are much larger in size.

The ELH are migratory insects which overwinter in the southern US between southern Louisiana and northern Florida. Leafhoppers make their annual northward migration into the US each spring and eventually infest an area in the US from the Atlantic coast to the Rocky Mountains. In California and Arizona low desert valleys ELH can be found on alfalfa throughout the year. Population increases are often noted in September-October due to an influx of adults on northerly fall winds and/or increased survival with lower temperatures. This is part of the reason that populations of ELH can vary from year to year in California.

It is unknown if any leafhoppers return from the northern US to the southern gulf states during the fall. The long-distance migrants are predominantly female with a sex ratio of 25 females to 1 male when first found in an alfalfa field and most of the females are carrying mature eggs and are able to initiate a new generation once they arrive to the new location.

In California, ELH have 3-4 generations per year from May to late October and can survive on a wide host range of >200 cultivated and wild plants which include fruit trees, forage crops, and vegetables. The average reproductive life is 30-35 days for females and 33 days for males. Female ELH are capable of laying 2-3 eggs daily which they insert into the alfalfa stem, petioles and leaf blades soon after mating. Eggs hatch in 7-10 days producing wingless nymphs which go through five molts and are fully mature in ≈14 days (≈826 degree-days).

Adults and nymphal ELH extract plant sap from the undersides of leaves using their stylet mouthparts to pierce the leaf surface when feeding.  During feeding, the insect is simultaneously injecting saliva which carries toxic substances into the plant. These toxic substances in turn cause phloem blockage within the plant. It seems likely that both introduction of saliva during leafhopper feeding and mechanical wounding by stylet movement causes the wound response associated with vascular blockage. The result of the plant being unable to translocate materials causes portions of the plant above the point of blockage to die. The physiological response of alfalfa plants is very characteristic and referred to as “hopper burn”. Alfalfa plants suffering from hopperburn exhibit overall stunting and veins of infected leaves will turn white with a characteristic “V” shaped chlorosis. As leaves desiccate, they become limp and eventually turn necrotic and drop off. Leafhopper damage in alfalfa cumulates in reduced yields, reduced quality (especially lower protein content) and contributes to reduced stand longevity. Susceptibility of alfalfa to yield and quality reductions declines as stems mature. Yield reduction can extend into the next cutting cycle even in the absence of ELH if the phloem blockage in plant stems remains intact after harvest.

Management of Empoasca Leafhoppers in Alfalfa

There are two primary strategies for managing ELH infestations: insecticides and early harvest. Management of ELH can be achieved with the application of an effective insecticide when populations exceed the economic threshold for alfalfa. The general consensus is that tolerance for ELH should be increased as the alfalfa crop grows. This is due to greater production loss that can occur in early alfalfa growth from stunting due to ELH-induced phloem blockage (see above) compared to mature growth. A combination of alfalfa plant height, insecticide application costs/acre, and alfalfa value/ton is used in some states to determine ELH economic thresholds but has not been evaluated in California. The ELH threshold depends on alfalfa growth and yield/cutting (related to day-length), with more potential yield loss observed with increasing day-length.

Check the field in July and August (and if necessary into September) to see if leafhoppers are present. At the first sign of injury, sample the field with a standard sweep net. Leafhopper infestations usually begin on the field margin so be sure to include field edges in your samples. For information on sweep sampling, see the UC alfalfa IPM website here, http://www.ipm.ucdavis.edu/PMG/r1301211.html.

Sample four areas over the entire field by taking 5 sweeps in each area and counting the number of adults and nymphs. Record observations on a monitoring form (100 KB, PDF).

If alfalfa is 2 or more weeks away from harvest, apply treatments if counts reach five leafhoppers per sweep (adults and nymphs combined). Alfalfa scheduled to be harvested in 10 days to 2 weeks should be treated if counts reach 10 per sweep. Often, leafhopper infestations of treatable magnitude are confined to the first 50 to 100 feet of the field margin. If this is the case, treat only the field edges where high leafhopper counts are found.

As an alternative to treating the entire field, border cutting works well to "herd" the leafhoppers into the uncut strip. The strip can then be sprayed a few days after cutting, thus reducing the need to spray the entire field.

Chemical insecticide treatments are the only effective therapeutic tool when population reduction is needed quickly.  Appropriate insecticides should be selected to effectively manage ELH, and avoid exposure to field-workers, and minimize impacts on non-target organisms (e.g., natural enemies, pollinators, birds and fish). Consider the intended uses, restrictions and expectations carefully before selecting a particular product or formulation. Price alone should not be the deciding factor for which product to purchase. Be sure to rotate insecticides across all available classes and modes of action to slow ELH resistance development. Pyrethroid, organophosphate, and carbamate insecticides are available for ELH control. There are no reduced risk insecticides registered for alfalfa with activity on ELH. It is important to re-sample fields for ELH after chemical applications have been made to determine the effectiveness of the treatment, especially early in the alfalfa regrowth period.

Early harvests can reduce ELH populations. If alfalfa stands have more than 60% of the buds flowering, consider a early harvest in the next 7 days to avoid spraying. In this situation, the field should be resampled soon after harvest to determine the need for control. If the field cannot be harvested in 7 days and economic population levels are present, apply a short residual insecticide. If the alfalfa has experienced “hopper burn”, significant yield loss has already occurred and the field should be cut instead of sprayed.

A second approach to cultural control of ELH that has received considerable attention recently is the use of alfalfa/grass mixtures. Grasses are not utilized as host plants by the ELH, and it has been shown that mixed stands of some grass species with alfalfa can serve as a deterrent to leafhopper colonization and population buildup. However, the tradeoff is that the quality of the forage from mixed stands may be compromised compared with pure alfalfa stands. The principle of grass as an inhibitor has been shown to extend to the long standing practice of using a small grain, most commonly oats, as a companion crop to establish alfalfa.

The third option is to rely on plant resistance. Developments in alfalfa breeding for resistance started in 1997 when glandular haired (GH) varieties first became commercially available that may help to manage ELH in alfalfa. The glandular hair trait was obtained from uncultivated relatives of alfalfa and through conventional breeding methods was incorporated into alfalfa lines possessing acceptable agronomic characteristics. Although the presence of glandular hairs on the leaves and stems is thought to be responsible for ELH resistance, the mechanism by which this occurs is poorly understood. In fact, evidence exists with GH alfalfa for all three main types of crop resistance to insects to be operating: antibiosis, nonpreference, and tolerance. 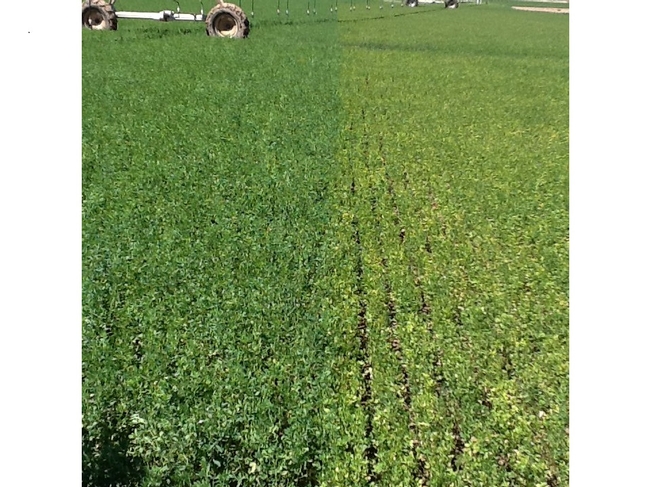 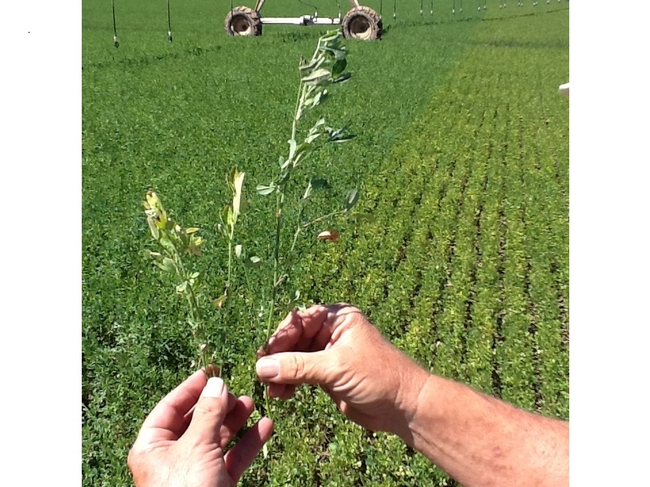 This was a popular alfalfa here in Central Texas during the 1950's. The name would suggest a GH variety.
by Vonny M. Barlow
on November 7, 2014 at 1:55 PM
Hairy Peruvian is an old landrace originating from Peru (not surprisingly). It’s relatively non-dormant and was grown in California as well. It is not a glandular haired variety, but does have non-glandular hairs that minimize leafhopper feeding.
Leave a Reply: