(Editor's Note: This breaking news story (Oct. 27) has three connections to the UC Davis Department of Entomology and Nematology.  The research began in the department; faculty member Anthony Cornel provided the mosquitoes for this research; and the father of research team member postdoctoral scholar Young-Moo completed two sabbaticals in the lab of nematologist Harry Kaya, emeritus professor, UC Davis Department of Entomology and Nematology.) The southern house mosquito, Culex quinquefasciatus. (2011 Photo by Kathy Keatley Garvey)
DAVIS--Scientists have long known that DEET, the gold standard of insect repellents for more than six decades,  effectively repels mosquitoes, but now researchers in the Walter Leal lab at the University of California, Davis, have discovered the exact odorant receptor that repels them. They have also identified a plant defensive compound that might mimic DEET, a discovery that could pave the way for better and more affordable insect repellents.

They examined the receptors of the southern house mosquito, Culex quinquefasciatus, which transmits such diseases as West Nile virus. Mosquitoes detect DEET and other smells with their antennae. Anthony Cornel provided the mosquitoes for the research.(Photo by Kathy Keatley Garvey)
The researchers set out to investigate two hypotheses regarding DEET's mode of action: activation of ionotropic receptor IR40a vs. odorant receptor(s). “Ionotropic receptor is another family of olfactory receptors, which seem to be the ancestral version when insects were aquatic,” Leal said. “So, the ionotropic receptors normally detect acid, bases, and other water soluble compounds.”

They discovered that the direct activation of an odorant receptor, not an ionotrophic receptor, “is necessary for DEET reception and repellency in Culex mosquitoes.” They also detected a link between DEET and methyl jasmonate, thus suggesting that DEET might work by mimicking a defensive compound from plants.

“Vector-borne diseases are major health problems for travelers and populations living in endemic regions,” said Leal. “Among the most notorious vectors are mosquitoes that unwittingly transmit the protozoan parasites causing malaria and viruses that cause infections, such as dengue, yellow fever, chikungunya, and encephalitis.”

The same receptor, Strickman noted, is activated by a naturally occurring plant defensive compound, “suggesting that synthetic repellents take advantage of the same mechanisms that plants have developed as a result of selection exerted by herbivorous insects.”

Strickman called the research “a fascinating biological story, but it also opens the door to systematic development of highly effective repellents that would create a big improvement in personal protection. In theory, a compound that was 100,000 times more effective than current repellents might be used at much lower concentration and create completely new ways to prevent mosquito bites.”

Progress toward development of better and more affordable repellents has been slow, they said, because scientists weren't sure which odorant receptor was involved.

Mosquito researcher Anthony Cornel, associate professor with the UC Davis Department of Entomology and Nematology, and based at the Kearney Agricultural Research and Extension Center, Parlier, provided mosquitoes that allowed the Leal lab to duplicate his mosquito colony at UC Davis. Richard Benton of the University of Lausanne, Switzerland shared his flies, Drosophila plasmids, also part of the research. (See related story on Anthony Cornel)

The Leal lab published groundbreaking research in 2008 in PNAS that found that mosquitoes avoid DEET because mosquitoes dislike the smell, not because it masks the smell of the host or jams the senses. “Mosquitoes don't like it because it smells bad to them,” Leal said at the time.

More than 200 million people worldwide use the chemical insect repellent, developed by scientists at the U.S. Department of Agriculture and patented by the U.S. Army in 1946. 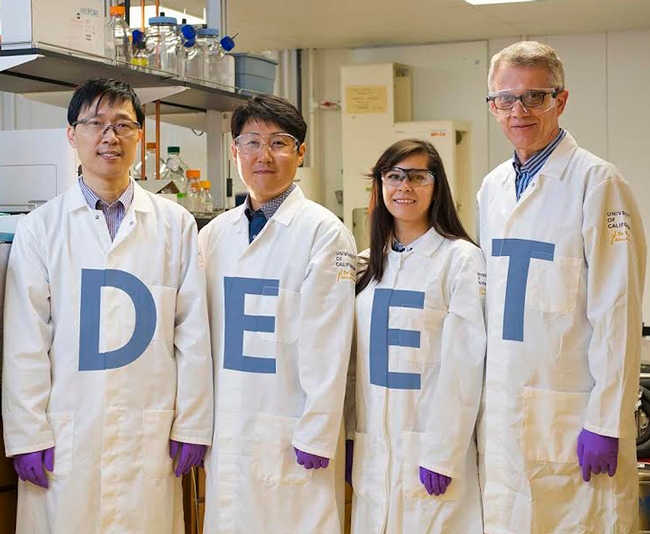